Cut it out: Despite efforts by town officials, some residents find planning process shady 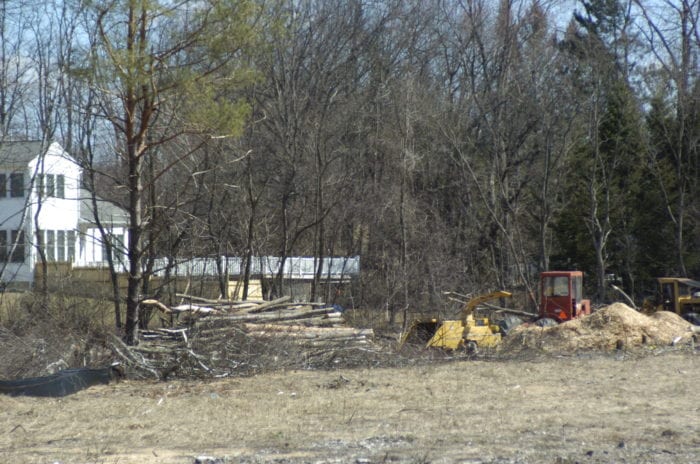 Where once there were trees for this homeowner to enjoy, there is now a clearing for new homes to be developed. Ali Hibbs/Spotlight

COLONIE — Members of a citizen organization called Save Colonie’s Trees went before both the town planning board and the town board in April to present a letter outlining concerns about the process of commercial and residential development in the Town of Colonie. Specifically, they voiced dissatisfaction with the clearing of trees from development properties and what they characterized as a lack of code enforcement by town officials.

At the heart of the issue is the clearing of trees from parcels of land under development, particularly those that are adjacent to residential neighborhoods. Specifically, the group referenced a meeting that took place in November of last year, during which Town Supervisor Paula Mahan, Town Attorney Mike Maggiulli and Director of the Planning and Economic Development Department Joe LaCivita met with the group to address its concerns; At the time, the property in question was more than 8 acres of land on Aviation Road near the Ciccotti Center.

Following that meeting, said Susan Weber, an active member of Save Colonie’s Trees, it was the group’s understanding that the town would begin enforcing an overlooked section of the town code (Chapter 177), prohibiting the removal of trees more than 10 feet outside the footprint of the proposed building and parking areas, as well as requiring the identification and documentation of all trees with a diameter greater than three inches. The code also prohibits the clearing of trees prior to final site plan approval by the planning board. A follow-up email from Maggiulli to the planning board and other town officials, according to Weber, indicated that the town would ensure those laws were being followed.

“Much to our dismay, however,” read Weber before the planning board on Tuesday night, “Mr. Maggiulli’s December 21 directive has been ignored. “The planning board and PEDD have continued to allow developers to clear-cut woodlands in clear violation of the town’s own laws. Most recently, Mr. Finning of Finning Properties clear-cut mature trees and removed all vegetation from a 15.8-acre federally protected wetland and mature forest off Maxwell Road, removing all trees and shrubs up to the abutting owners’ property lines.”

“He did not have approval to clear,” Maggiulli told Spotlight early this month. “We were as much surprised by that as the residents were. He had applied in June 2015 for a grading permit, which he would have needed to start cutting down trees and clearing the property. That was denied on the grounds that he didn’t have final approval.” Maggiulli said that he believes Finning may have tried to get around the necessary permits by leaving the stumps of the felled trees in the ground on the property—therefore not completely “clearing” the property. “We were quite upset by that, and we have taken steps to file two violations and we intend to file more. That’s being handled by my office.

“We’re going through the town code,” he continued, “and we’re certainly going to cite him for cutting down the trees without a permit and without our knowledge and consent.”

PEDD Director Joe LaCivita said that Finning went ahead with clearing the trees on the Maxwell Road site after receiving approval from the state Departments of Environmental Conservation (DEC) and Transportation (DOT)—and that the planning department did not object. Finning, he said, had been working with the state regarding soil left over after the bridge replacement at Exit 4 on the state thruway. “We had oversight of the stormwater/clearing component and, based on the review by the DEC and DOT, we said ‘yes, we can go ahead with it.’ But we did not give him the permit.”

“That doesn’t matter,” said Maggiulli of the PEDD’s implied approval. “He still has to get a grading permit from the town. Even if he did have DOT approval, he still needs town permission. He tried to get permission, we denied it, and in my mind he went ahead anyway so he’s going to be cited for that.”

“[PEDD] looked at it,” said LaCivita, “and because of the amount of time this project has taken, and because of the greater oversight by DEC and DOT, we agreed to it. But there were no permits given by the town in order to do so.” The lack of town permits, encroachment on a small part of the protected wetlands on the property and exposed soils are the basis for violations now facing the developer, according LaCivita.

The Maxwell Road project has been in the works since 2005, said LaCivita. “There have been lots of starts and stops.” After the rezoning of the property, he said, Maxwell Road had to be realigned, forcing Finning to re-conceptualize and redesign. “It actually split his parcel and so it stopped the approval process because he needed to redesign.” The subsequent disruption of wetlands necessitated additional conservation restrictions, requiring further redesigns; and changing town codes—as well as residential concerns—sent the developer back to the drawing board several times. After ten years, final approval was granted early last month at the planning board meeting on Tuesday, April 5. By that meeting, said LaCivita and Town Board member Jennifer Whalen, Finning seemed to have adequately appeased the neighboring residents.

Noting that Save Colonie’s Trees presented its letter two weeks after the Maxwell Road property received final approval, Whalen, who attends every planning board meeting and is liaison to the town’s Conservation Advisory Committee, said “it would have been nice if those concerns were voiced while the developer was in the room. He said that he had been talking for the last 11 years to the folks on Margaret Drive whose trees were all cut down along their property line, and that they know that he will do anything and everything to make them happy.” Chairman of the Planning Board Peter Stuto, she said, made the approval contingent on the continued participation of neighboring residents in the final landscaping decisions on lands abutting their properties.

“We’re going to get everyone’s contact information,” said LaCivita. “We will send every neighbor bordering that address a copy of the plan when it’s submitted for review to see whether they agree with the type of planting that will be done in their backyard. We’re bringing them back into the process so they can be sure that they are aware of anything that is going to happen before it goes into the construction phase.”

“I will say this,” said Whalen. “We are watching the trees very closely on the Conservation Advisory Council. At every meeting and on every file, their comments and recommendations are being read into the record now.” Prior to Whalen’s appointment as liaison to the CAC, she said that its recommendations were not making it into the record and the group felt as though its efforts went largely unheeded. The planning board might talk about the trees, she said, but not really mention feedback offered by the CAC. “So now, Joe LaCivita and I are making sure those recommendations make it into every packet and are on the record.”

“They’re wonderful,” Weber said of the CAC. “They’re really concerned about the trees.” Weber only became aware of the CAC after the Aviation Road clearing last year, but says that she and other members of Save Colonie’s Trees have begun attending all the meetings and have been well received. They’re happy, she said, that the group has become more aggressive about having its recommendations heard.

Regarding other recommendations put forth by Save Colonie’s Trees:

Town officials seem reluctant to entertain the idea of a moratorium on final approval of new projects even though the development of a new comprehensive plan will begin this year. “There are different ways that we can handle this,” said LaCivita, voicing concerns that a moratorium would negatively affect the town’s tax base in coming years.

Tech upgrades and timely updates on upcoming agendas and meeting minutes are both recommendations that officials say they are looking into:

Both LaCivita and Maggiulli have spoken with the town stenographer about getting minutes posted on the PEDD website faster;

Conversations about live-streaming or putting power point presentations of the meetings online have been occurring, but financial and website capacity are apparently concerns;

And an interactive town map is underway for the website, contingent on available budgeted funds.

At least two traffic studies are underway, one in conjunction with Albany County, to determine the impact of further developments on already congested roads and updated environmental impact statements will be underway in the near-term future, according to LaCivita.

LaCivita said implementing a specific tree ordinance is something worth considering, but that he has concerns about potential wording. “A tree might be more than 3 inches in diameter,” he said, mentioning possible “tree risk assessment” studies being conducted at Cobleskill College, “but that doesn’t mean that it’s healthy or desirable for that property. There are a lot of cases in which the planting done by the developer is preferable and better for the future growth of those natural areas.”

“We’re not going away,” said Weber. “We’re going to push for these reforms through the entire process. We would like to see the planning board brought into the 21st century, with appropriate, up-to-date tools to provide notice to, and hear input from, affected residents before projects are considered.

“We’re not against development,” she said. “We want it to be consistent with the quality of life we enjoy, so that it’s not discordant. What’s wrong with that? Everybody wants that.”

Mama’s Moments: Birth doula for a planned C-section? Of course