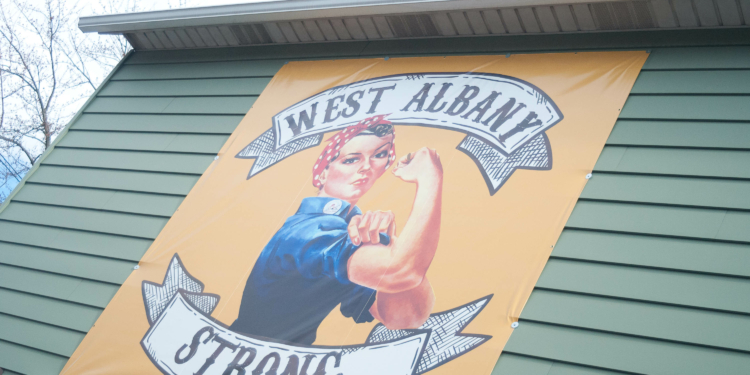 A “West Albany Strong’ banner hangs off the side of Recycled Salon hair salon, where hair stylist Jacquelyn Porreca was murdered. For salon owner David Belschwinder, the banner defines the positive spirit of the neighborhood. Michael Hallisey/Spotlight

WEST ALBANY — “This happening at my salon is something I would never have dreamed of,” said David Belschwinder, owner of Recycled Salon hair salon on Sand Creek Road n Colonie. His business was the site of a senseless homicide last summer, in which two defendants have been accused of the stabbing death of Jacquelyn Porreca, a stylist at the salon who was unknown to the two men, while they were attempting to steal money to feed a heroin addiction.

Now, as Michael Chmielewski and Sean Moreland, both of whom rejected plea deals in January, await trial, Belschwinder is organizing an event to remember the victim, honor those whose work has helped to glue a community back together and to raise money to establish a scholarship in Jacquelyn Porreca’s name.

Stunned by the violent and random nature of the crime, the community waited months while the Colonie Police Department dedicated hundreds of hours of detective work to identify and arrest the perpetrators. “The shock wave that went through this neighborhood, it was really bad,” said Belschwinder. “We were all really scared, you know? I mean, people were locking their doors. They were really scared, I was really scared.”

Looking back on last summer, Belschwinder says that one thing he gratefully recalls is the camaraderie that arose within the community and, particularly, the dedication and support of local police and firefighters who responded with haste and sensitivity.

“As far as the firemen,” he said, “I mean, they came in here and they cleaned my shop up.” Belschwinder says that they got him a beer and dealt with the mess left behind in his salon. “These are volunteer firemen; these are real, true people. These are people that I’ll never forget, and this is pretty much what has driven me to say thank you now that this whole thing is over.

“A lot of police officers and firemen come into the shop, and they’ve become dear friends of mine,” he continued. “And the police alone have worked endlessly for months and months—at one time, they had 27 detectives working on this, and some of them worked for three straight months without even taking a day off on this case. These are the people that are in the community and that are putting their lives on the line every single day, and I really feel that they’re very remarkable people.”

“The people in that area,” said Albany County Legislator Joe O’Brien, who represents West Albany, “are really dedicated to their community, and they watch out for one another. When this unfortunate event occurred, I went out there to visit Dave, and community members and business owners in that area were all stopping by the lend their support. And,” he continued, “the Colonie police have been just wonderful; they stayed on that case until it was solved, and the work they did is a tribute to them.”

Belschwinder added that he also hopes the event will remind the office of Albany County District Attorney David Soares that local residents have not forgotten and want to see him send a clear message. “I’m just really hoping that justice will be done,” he said. “If you’re going to come into our neighborhood and you’re going to start to do this kind of stuff, we’re going to take it seriously.”

Belschwinder has hung a banner on the outside of his salon, bearing the words: West Albany Strong. “After the bombings in Boston,” he explained. “I kind of just liked the way that they had this attitude of Boston Strong, and that’s really where I got the idea from. The community has really come to join arms with this West Albany Strong thing. I’m having a lot of fun with it. This is my way of making something good come of it; kind of like my closure.”

Moving on: Phillips Hardware closes store in Colonie, family moving on to another business venture