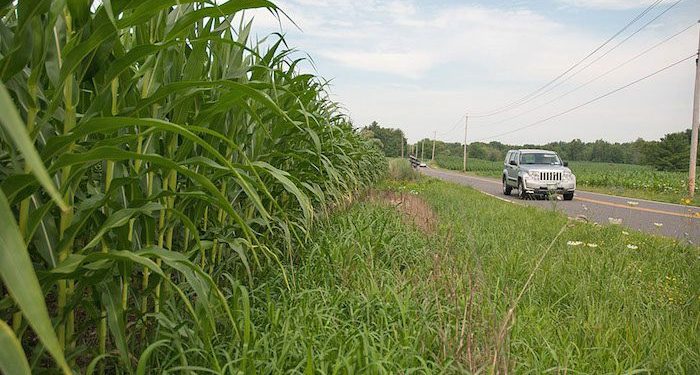 GLENMONT — For what is a quiet local political season, there is still quite a bit of clamoring around Bethlehem’s proposed effort to conserve 307 acres of farmland through a $3 million purchase plan.

The political jabs back-and-forth is reminiscent of last year’s Delaware Avenue Complete Streets project: Where the Town Board initially took steps to proceed before a petition drive forced the vote to go before residents on Election Day.

Board members voted 5-0 in June to move $2.2 million from the town’s Farms & Forest Fund, a set aside account established three years ago. The Town Board wants to purchase nine parcels of land — including three of the four corners along the intersection of Wemple Road and Route 9W — from Milltowne Plaza. Town Supervisor David VanLuven explained that the immediate benefit would be to place agricultural easements on it, preventing development and preserving the area’s agricultural character.

It will be part of a total $3 million dollar purchase of 307 acres VanLuven proposed in May. The land purchase would come from various municipal funds, avoiding a municipal bond or any additional taxes. The aggregate value of the land was appraised at $4,032,500 in February by Schecter Valuation Services, LLC, a company commissioned by the Town.

The Route 9W corridor has long been viewed as a target for future development. It was first documented in the town’s original comprehensive plan nearly 20 years ago. Since then, new residential neighborhoods have developed along Fuera Bush and Wemple roads. In his presentation to the Town Board, VanLuven argued that the purchase would prevent future development and conserve the farmland.

Among the nine parcels in consideration is Heath’s Dairy Farm on the northeast corner of Route 9W and Wemple Road. The historic farm accounts for three corners of the intersection. The northwest corner is designated for a proposed 96-unit multifamily development.

With the recent passing of the town’s Comprehensive Plan Update, new town zoning will label the disputed land as Rural Multi-Use. The new designation is defined in the updated document as “low-density residential and commercial uses due to limited infrastructure available.” Land presently identified as agriculture or possessing prime farmland falls under this classification. The designation follows several months of discussion fueled by residents advocating for both open space and farmland conservation.

The Town still has to pass new zoning ordinances in order to codify the classification.

VanLuven sees the proposition as an opportunity that he’s often seen go wasted. Prior to his run for Town Hall, he spent more than a decade with The Nature Conservancy in New York and New Hampshire. His 30-year career as a planner and ecologist includes work with the New Hampshire Division of Forests & Lands, and as a lobbyist in Albany and Washington, D.C.

“We assume that if a space has been green for the last 200 years, it will continue to be green for 200 years. We assume that things aren’t going to change and then when they do, we’re surprised and disappointed by it,” he said. “That’s why a message I’ve been pounding home since I started as a supervisor was that if we want to continue to have farms and forests in our community, we have to step up and pay for them.”

Since the land purchase was first proposed in May, VanLuven said the Town has gathered support from half a dozen entities, including the American Farmland Trust, Scenic Hudson and the New York League of Conservation Voters.

Resident Steve Peterson questioned the purchase before announcing to board members he would be collecting signatures to petition it to go before voters. He was responsible for forcing the Delaware Avenue Complete Streets and Road Diet project to a public vote, which ultimately lost in the polls last November.

“I’m not against open space,” said Peterson, “It’s about the process.”

Arguments raised against the purchase plan include returning the monies back to taxpayers, either by funding public work services and recreational parks, or knocking down the cost of living. Town Board member Dan Coffey said all of which have been addressed.

“Fortunately, we have a five-year capital plan which has addressed all of our infrastructure needs,” Coffey said. “We are giving a COLA of 3 percent to all of our employees in our latest budget. We’ve addressed the pool improvements and other projects such as the Glenmont Roundabout and Clapper Road improvements. All of that has been budgeted. And the farms and forest fund was set up in 2019 as a dedicated fund because we had excess sales tax revenue in 2021.”

The Albany County Farm Bureau contends that the fund was intended for tax easements and not land purchases. The local branch of the statewide lobby group has also issued a dissension against the plan, arguing that the move will take needed taxes away from the Ravena Coeymans Selkirk School District while describing a “vagueness” surrounding the Town’s plans overall.

“The Town retaining ownership with the hopes of renting to farmers goes against what was proposed with the farms and forest fund -which clearly noted that land would remain in private ownership,”  the local bureau shared in a statement.

“The town government should not be in the business of agriculture.”