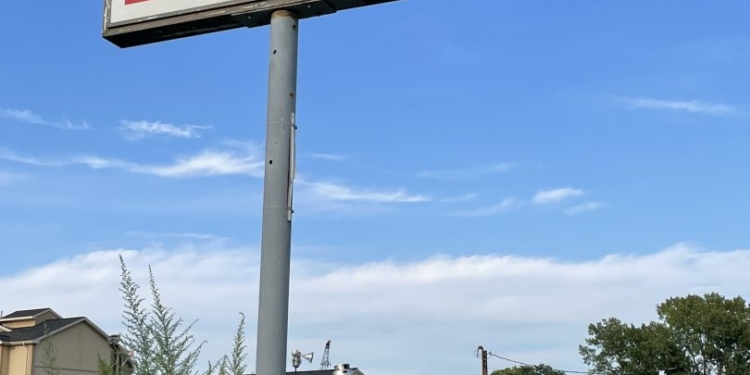 GLENMONT — Stewart’s Shops expansion proposal for Frontage Road stands one board away from fruition, and it can’t come soon enough for Johnny B’s Glenmont Diner.

John Behiri, the eponymous “Johnny B,” had closed his diner’s doors following the governor’s mandate in response to the COVID-19 pandemic. A sign still hangs in the window noting that time, behind the growth of weeds and scrub trees.

Since closing the diner, Behiri has brokered a deal to sell the land to Stewart’s Shops as part of its expansion plan, and a restaurant chain has agreed to purchase the Silk City Diner model to incorporate into one of its eateries. All of which is contingent on the plan passing Town Hall.

“It’s been almost eighteen months since I signed the purchase contract with the Stewart’s Corporation. Eighteen long months in limbo waiting for this sale to go through,” Behiri wrote the Bethlehem Town Planning Board in March. “But unfortunately, there hasn’t been any talk about the diner at any of the meetings…l’ve seen the minutes. The only discussions regarding Stewart’s proposal to purchase my property are about fossil fuels, diesel fuel tanks, canopies, electric car chargers, etc. All of which are permitted uses…are they not?”

The proposal includes the merging of two neighboring parcels, the existing Stewart’s Shop on 33 Frontage Road, and Johnny B’s Glenmont Diner. The diner, which closed in June 2020, was formally known as Miss Glenmont Diner.

The initial proposal, submitted to the town last February, suggested the diner was subject to demolition. News of the plan was met by public outcry over social media. Stewart’s Shops’ latest statement reveals a common interest in preserving the eatery’s history.

The Zoning Board of Appeals granted a variance allowing for a diesel canopy that initially hung up the plans in June, just weeks before the Town Board adopted an update to its comprehensive plan that included, among other things, a commitment to prohibit new or expanded fossil fuel stations. Local environmental advocates noted as such in protest to the Planning Board.

“The project is inconsistent with the goals of the Town of Bethlehem’s Comprehensive Plan. This fact was acknowledged by Stewart Shops in their latest redesign.” Patricia Beeler and Peter M. Iwanowicz wrote in a September letter to the board. “However, their latest redesign continues to expand the number of fueling pumps (four new diesel dispensers for heavy-duty trucks) at this location and, thus, we believe that it is inconsistent with the Comprehensive Plan.”

Stewart’s addressed the matter, modifying its plan in July to allow for eight fueling points, matching the same number as those present at the current site. The store chain also noted its plan to add eight EV charging stations, transitioning the Tesla vehicle chargers to universal chargers.

“So this would be our new proposal when we resubmit,” Jim Gillespie, Stewart’s Shops spokesperson, told Planning Board members Tuesday, Sept. 6.

“[It] will reflect eight fueling positions, which is consistent with what is there today.”

Planning Board members provided little input as it awaits for the new submission. It did, however, ask for a letter certifying that the former Miss Glenmont Diner will be preserved by would-be owner, Jackson Hole.

For generations, the restaurant had fed residents and local businesses under the Miss Glenmont sign — one of a few similarities it shared with Miss Albany Diner in the Capital City’s Warehouse District.

Miss Albany Diner is an older cousin of the one in Glenmont. It was built before World War II in 1941. Through the years, it had retained many of the characteristics that distinguish Silk City Diners from others.

The Art Deco style buildings, with cherry wood and porcelain-enameled steel, and geometrically tiled floors, were built to resemble train cars. Only 1,500 of the Silk City Diner model was made by the Paterson Vehicle Company from 1926 to 1966.

The Broadway eatery preserved the look so well, it was used to shoot a scene in the 1986 film “Ironweed,” starring Jack Nicholson and Meryl Streep. In 2000, it was listed on the U.S. National Register of Historic Places.

According to its website, Jackson Hole owns four restaurants within the Tri-State area surrounding New York City. The burger chain has adopted the old-school train car look as part of its branding. The Glenmont diner is rumored to be moved to Queens. Gillespie said Stewart’s has agreed to split the relocation costs with the restaurant chain.

Behiri stated he welcomed the chance to close on the deal.

“I’m not here for a pity party,” he stated. “I was fortunate that Stewart’s approached me shortly after the mandate, showing interest in purchasing the property the diner sits on. lt made complete sense- they were my next-door business neighbor; their current store is small and outdated; they’re a local company that is entrenched in the community…always giving back; and let’s face it, their new stores are amazing and the plans for what they propose to build on the adjoining lots will really beautify the neighborhood.”