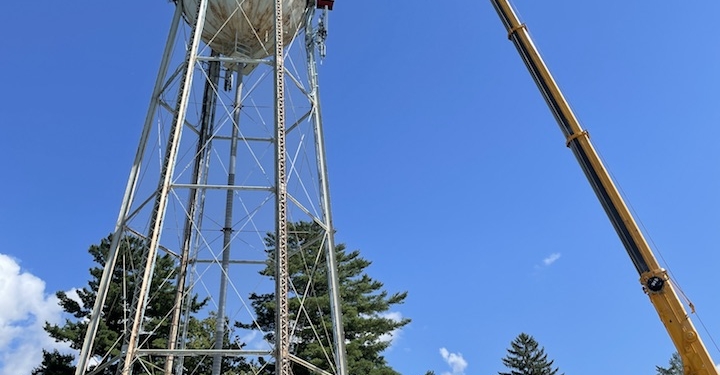 BETHLEHEM — The Town is positioning itself to take advantage of state funds that could pay toward three big-ticket infrastructure projects estimated at $10.8 million, one of which addresses the neary 100-year-old water tower in Delmar.

The Town Board unanimously adopted separate resolutions focused on potential projects impacting the community’s water infrastructure; approving $600,000 to replace a blower at the Dinmore Road Wastewater Treatment Plant, $3.9 million to replace the water tank next door to the Bethlehem Central Middle School, and another $6.3 million to replace one of two transmission mains along New Scotland Road from Route 85A to Kenwood Avenue.

The resolutions allow the town’s public works department to spend money from either the water or sewer capital reserve funds, but they each needed to be passed to apply for funds available under the state’s $2.5 billion Clean Water Infrastructure Act.

The State Assembly passed the act in 2017 to address such projects, claiming New York has some of the oldest water networks in the country. The water tower at 308 Kenwood Avenue was erected in 1929. The water main proposed for replacement along New Scotland Road was installed in 1961 and, the town’s commissioner of public works said, has “had a significant history of breaks over the years.”

“Part of the application process, you have to have all these resolutions in place just to say that, if we are to get the awards and we want to move these projects forward, we’re committed to them. We’re not forced to commit to these now,” said George Kansas. “It’s just saying that we agree that these projects need to be done, and they do. I mean, we didn’t just throw everything at the wall trying to fund everything. This water line is one that’s had a significant history of breaks over the years.”

Kansas said the state has recently opened up to $225 million of those funds to local municipalities, but the deadline to apply falls Friday, Sept. 9, “So we wanted to try to jump on this bandwagon as best we could and try to get these applications submitted.”

Concerns over the country’s aging infrastructure turned to policy during the Obama  administration, first targeting surface transportation in 2014. Another act of legislation was passed in 2016 in response to the public water disaster in Flint, Michigan.

At least two separate repairs were done to a sewer line underneath Kenwood Avenue last year. Town crews ripped open a stretch of the road in front of the middle school dating back to 1929. Another section prompted limited traffic after a depression was observed around the Four Corners.

Marred underneath a contentious battle over a proposed road diet along Delaware Avenue last year were plans to replace a Korean War-era water transmission main, notably in front of the Elsmere Elementary School. Last July, a rupture in the line near Delaware Plaza forced the town to temporarily shut water service off to businesses and residences in the area.

The water tower had been worked into Delmar life. Climbing it used to be a rite of passage for high school fraternity organizations.

“I remember the days when we used to see kids climb that tower and ask them to come down and then ask them not to do it,” Retired Bethlehem Police officer Leo Dorsey recently shared online. “Because I wasn’t going to go up and get them.”