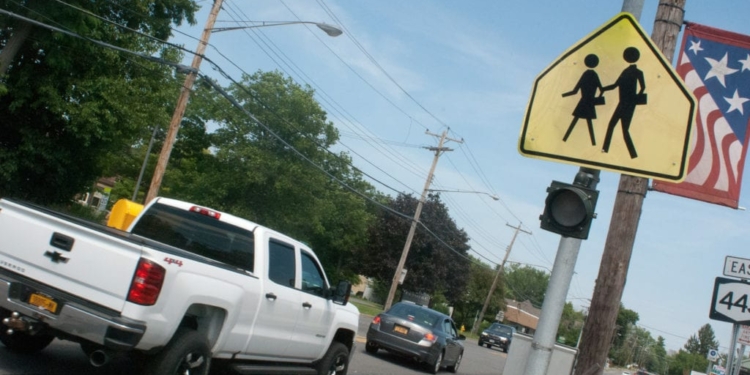 ELSMERE — The Town of Bethlehem is jockeying for more state funds — up to $4.5 million — to help reshape the Delaware Avenue corridor. To do so, it’s incorporating buy-in by assembling an advisory committee of local business owners.

The state Department of State launched NY Forward in late July, introducing the new grant program aimed toward invigorating downtowns and town centers by aiding in the redevelopment of existing downtown buildings, façade improvements, park and recreation upgrades and more.

Awarded communities stand to receive between $2.25 and $4.5 million each to implement its portfolio of proposed projects in the downtown area. Funds and direct technical and consulting assistance will also be provided for awarded communities for a six-month planning process.

As part of the application process, communities are required to assemble an advisory committee to help guide application development and project implementation, if awarded a grant.

“The individuals who we’ve listed there, identify business owners, property owners, and residents who would really cover the entirety of the corridor — bring a range of different perspectives and ideas to the project,” Taylor said.

The Town Board approved the appointments with a 4-0 vote. Town Board member David DeCancio abstained from the vote to avoid what he described as a potential conflict of interest.

Committee members are anticipated to attend one preliminary committee meeting in early September. If awarded a grant, committee responsibilities would include monthly meetings during development of its strategy plan, a six-month process following the award where the Town and committee would engage with the public to fully develop the vision for the downtown area and describe in detail the specific projects along Delaware Avenue that would receive funding.

Taylor said the Town had to respond quickly to the state, expressing its intent to apply for the grant. The list of names includes a wide gamut of individuals familiar with Town Hall, including those who have voiced opposition against proposed policy.

As the Town wrangled over a proposed road diet for Delaware Avenue, Jim Giacone and Debbie Nolan Murray were among the loudest voices speaking against the plan. And before the Town Board implemented a year-long moratorium on residential development, Judi Gabler warned against it. Those were a few examples Town Board members used to show the proposed committee’s diverse perspective. But diversity was nonetheless a concern.

Resident Steve Peterson balked at the list of names, protesting that it lacked a single Republican and failed to feature any people of color. He lobbied directly toward Town Board member Maureen Cunningham, a strong advocate for diversity and inclusion.

“Come on, Maureen. You see it,” Peterson said during the meeting’s opening public comment section. Town Board members held their comments for the business item later in the meeting.

“You’re all gonna laugh,” Cunningham said, “But the first thing I thought of when I saw the list was that there is no representation from people of color on this list, that I can tell. I know most of them [on the list].”

Taylor had explained that with applications due in September, his staff moved quickly to engage business and community leaders interested in serving on the committee. The list was placed together with help from the Bethlehem Chamber of Commerce.

Cunningham said she could name two potential candidates. She cast her approval for the committee but not without advising that amendments be made to include people of color.

Town Supervisor David VanLuven responded to the claim that there were no Republicans on the board, explaining that political affiliations were not reviewed.

“Despite the disparaging comments earlier this evening… this is an incredible opportunity for our community to get funding for business owners to do work on their properties,” VanLuven said. “It’s unusual to have anything like this. I haven’t seen it in a long time, so I’m very excited about it.”