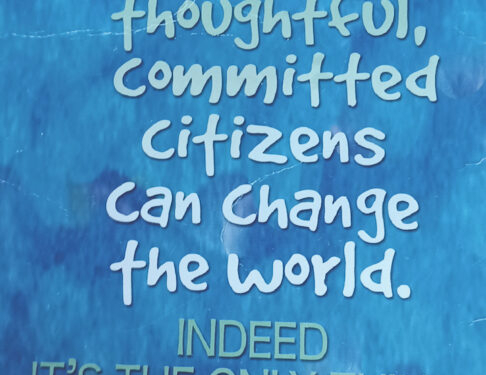 There is no way to hide what is going on in the world from three, 14-year-old mini-adults. I think if we lived on a homestead in Colorado, we would still see that our country is in trouble. I am often torn by two competing thoughts: Be light and airy or become a political lightning rod. Don’t stand too close – you might get fried.

Our country (you remember, the land of the free) has continued to strip away the voices of so many, and the ability to see all people as valuable is slowly being taken away.

Pride Month has passed, and so many rainbows have been packed away until next year when they will be dusted off once again and displayed. The other 11 months of the year disparaging comments and micro-aggressions are the norm for many. When our home was threatened because of our rainbow flag, which is up all year, we pushed back. We put up two rainbow windsocks to fly freely in our yard. The comment was made by a classmate of the kids, and when it was brought to the attention of school officials, there didn’t seem to be a consequence imposed. I felt like we were being found at fault because we chose to fly a rainbow flag. It felt like our family’s voice was being muted.

I doubt that James Madison was thinking more than 200 years in the future when he penned the Second Amendment. I don’t know if he would be pleased that this part of the Bill of Rights is marched out every time those of us who protest against gun violence ask to be heard. Time and again, the right to keep and bear arms has been deemed more important than the lives of the citizens. The Gun Violence Archive states there are an average of 11 mass shootings every week. There have been 22,417 deaths due to gun violence as of July 4, 2022. The Center for Disease Control and Prevention has listed gun violence as the No. 1 killer of children from 1-19 years old. Sobering, no?

My voice has gotten louder and more assertive over the years. Olivia and Rebecca have been in the room when I have been on the phone trying to cancel a service. The agent on the other end of the phone relentlessly pelted me with random information and offers that I repeatedly turned down. Yes, this is the job of the agent and I know that, but I asked over and over to just cancel. I was not being heard. I was just an annoying woman to be swatted away like a cluster of gnats. I did not yell. I did not get nasty. I had the call on speaker so that Olivia and Rebecca could hear both sides of the conversation. We made eye contact and rolled our eyes and muffled our giggles. Finally, I got through to this person and my service was cancelled within the hour. It took 46 minutes to be heard.

On the day of Benjamin, Rebecca and Olivia’s Moving Up ceremony, we learned that Roe v. Wade had been overturned. We sat in my car in stunned silence. The voices of so many pro-choice advocates have been raised in protest. We have added our voices added to the outrage. My kids know about abortion, and we have discussed how to raise our voices and advocate for every woman to have a choice.

Looking at the world as my brave trio gets older, I can only wonder how they will make an impact. Each one is precious and loved. Olivia may be quiet at times, but she is a force to be reckoned with. Benjamin is an advocate and will reach out for people who need a hand. Rebecca is vocal and will speak her mind. Each child is secure in themselves.

I have fought so many fights on behalf of Olivia, Benjamin and Rebecca. Now they speak for themselves and advocate for those around them. I will overhear snippets of conversations about what is right and what is just. Often the logic is sound. Often the ideas are plausible. Too often, they realize no one in authority is going to listen. The choice becomes do they give up or do they get loud and rowdy?

Raising future adults with the intent that they will help change the world with voices that get louder as they seek more of what is just and right is daunting. They have voices that will be heard. Watch out, because like their momma, they stand tall in their convictions.

Jennifer Steuer is an Albany mom whose busy household includes her husband, Harlan, and 14-year-old triplets Olivia, Benjamin and Rebecca. Follow her on Instagram: jennifersteuer.