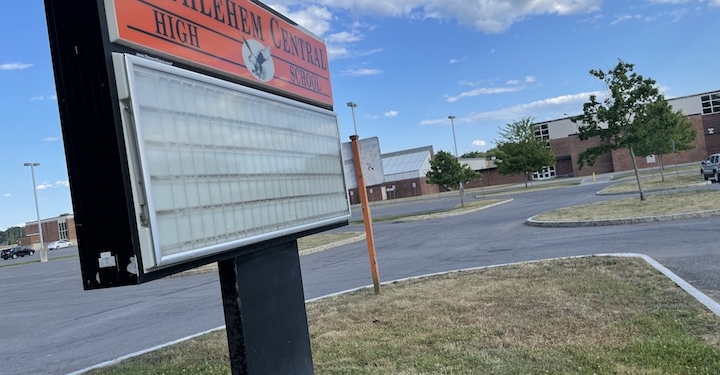 DELMAR — The Bethlehem Central coach that has fallen under public scrutiny of late said she was largely unaware of the issues that had led to three investigations on her alleged behaviors last season.

Dawn Austin, the high school’s varsity field hockey coach since 2019, was described as having more than 20 years of experience — including a previous stint as a lacrosse coach at the school before leaving in 2009.

““In 20-plus years of coaching, from third graders to varsity players, no one has ever complained that we don’t do enough fun stuff,” Austin stated in a letter addressed to Bethlehem Athletic Director Len Kies last November. “We certainly did fewer than normal in-person team-building during the earlier-Covid ‘Fall 2’ season last year.”

The coach’s response was part of a district level investigation to address allegations that her behaviors was leading to mental health issue for several of her players. The details from the third-party report were provided to The Spotlight in response to a Freedom of Information Law request submitted to the school district.

The heavily redacted report omits the names of players and parents, unsubstantiated claims and all correspondences between school staff and the school’s lawyers. Austin provided the athletic department with two letters, one in November and another the following December, addressing complaints from parents and accusations of cronyism.

By May, the adminstration continued to receive complaints over its in-house investigations, with parents questioning why it excluded social workers or health counselors amid their claims over mental anguish. The district employed Keane & Beane, a law firm from White Plains, to further examine. That investigation included interviews with fifteen students and their respective parents and staff members. The special counsel interviewed Austin, who was represented by her husband, attorney Timothy Austin. Each interview was accompanied by someone from the school district and by the schools’ K-12 Counseling & Social Work Supervisor, Kristen Connor.

Parents had described Austin as “abusive and abrasive” towards her student athletes. Several of them pointed to the post-game briefing following a match against Niskayuna, when she allegedly said Bethlehem could have won with just two players on the field.

Parents later described their children as suffering from apparent low self esteem, expressing lack of interest in playing, withdrawn and crying. When the team’s two captains later approached the coach about the squad’s low morale, she allegedly rebuffed them.

A singular complaint accused the coach of body shaming after she allegedly told one of her players “you don’t look athletic enough.” Austin’s lawyer refuted the claim in a May letter to Keane & Beane.

“Coach Austin does not believe she ever said the exact words, ‘you don’t look athletic,’” stated her lawyer. “She certainly never said those words as commentary… Regarding effort and competitiveness, she likely said, ‘we’re athletes, let’s look like it,” or ‘let’s play like it.’ She might have said, ‘we aren’t being athletic,’ or ‘you aren’t in an athletic position,’ in reference to readiness to move.”

Austin expressed concern with the third-party’s examination. Through the first two in-house investigations, the district determined all claims against the coach as “unfounded.” When she was informed of an appeal, she was asked to answer to “several non specific claims, revealing no details or context.”

Austin’s current run as a coach is her second at Bethlehem Central. She was previously the junior varsity field hockey coach in 2001 before switching to junior varsity lacrosse in 2003. She had played both sports collegiately. She advanced to the varsity field hockey squad soon after, and was later named the varsity lacross head coach in 2005. She left the district four years later to raise her children and to take an office job opportunity.

Austin returned to the district in 2019, after she said Kies convinced her to take the field hockey coach position. She led the team to a No. 1 seed in sectional competition that first season before the onset of coronavirus the following spring.

The coach descibed a team dynamic challenged by the pandemic. Following a successful 2019, her first year back with the district, the team was stymied by mitigation protocols that reduced the following season to a truncated schedule. Off-field events to cultivate team unity was still limited last fall.

“Also, in the fall 2021 season, there was a small contingent of families who were disinclined to volunteer their time and/or to make their homes/yards available for team bonding, were less supportive of the team and were vocally negative and critical of the team, coaches and players (other than their own children or children’s close friends),” stated Austin’s lawyer. “Under those circumstances, it is not surprising that members of the team struggled to feel a sense of unity and struggled to handle adversity typical of Varsity athletics.”

Austin also said that any questions over playing time came from parents, not players. One complaint she received from a parent through a phone call. That unnamed player had not approached her.

“[In] the entirety of the time she has been a coach and in all of the settings and seasons in which she has been a coach—of players between elementary school age and seniors in high school encompassing more than 20 years and even more teams and seasons—never once has she been accused of conducting herself improperly toward a team or a player,” her lawyer stated.

The Keane & Beane examination concluded without finding any violations of the school’s Code of Conduct.