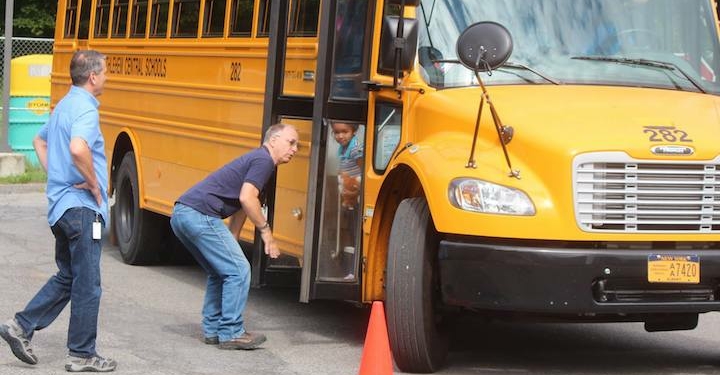 The district first proposed changes to school bus eligibility last November as the district attempted to address driver shortages. The changes, if passed, would eliminate four to five bus routes and reduce the need for as many drivers. Middle school and high school students losing eligibility will increase by a half mile, one mile and a mile and a half respectively.

“It’s not something anyone wants to do,” Board Member Meredith Moriarty said on March 2. “We are in a [transportation] crisis and this is one of the few solutions we have to the problem.”

The board is still open to taking public comment on the proposed changes. On March 16, the board will vote on whether to present the changes to the public and it will be put to public vote on May 17. If the community does not vote to pass the eligibility changes, bus routes will still be consolidated that will increase bus rides to up to an hour or more.

Complaints from community members include parents having to choose between their jobs or getting their children to school, inclement weather that would impact students’ travel, the lack of sidewalks in a lot of the walk zones and most importantly the safety of students walking to and from school.

“This includes during inclement weather such as rain or thunderstorms; snow and icy conditions; and temperatures that drop well below freezing for extended periods of time,” Anna Walker, a Hamagrael Elementary parent told the board on Feb. 16. “None of the roads my children would take have sidewalks. Let me repeat that statement, none of the roads my children would have to take currently have sidewalks.”

Parents are concerned about the history of pedestrian injuries and car accidents that have occurred along the routes their students will take. On Aug. 23, 2021 a woman was hit with the side-view mirror of a truck while jogging on Kenwood Avenue across from Bethlehem Central Middle School. Where this incident occurred, is on the walk that many middle schoolers would have to take with the approval of the proposed walk zone.

“Pedestrian safety [on Kenwood Avenue] remains a serious concern,” Brian Sweeney, a Bethlehem resident and parent of two district students, said last Wednesday. “Many of us fear it may only be a matter of time before a child in our community is injured or worse.”

The eligibility proposal does not address any additional crossing guards stationed in the expanded areas. Crossing guards are not addressed in the proposal because there are shortages similar to the driver shortages the district is already impacted by. This factor in combination with others make parents, like Sweeney, even more opposed to the proposition.

With the change in eligibility, some parents may be forced to pay for after school programs to ensure the safety of their children. The Bethlehem YMCA charges $305 per child for their after school program, leaving some families to pay an upwards of $900. If cost isn’t the issue, another is that many of the local programs are close to capacity.

“Don’t make working families choose between budgeting an additional $900 for after school care each month to keep their kids off the roads or paying another critical bill,” Walker said on March 2.

The board will vote on whether to pass the eligibility proposal on Wednesday, March 16. If the changes and proposal are approved, the public vote on eligibility will take place on Tuesday, May 17.

Changes to eligibility will go into effect in September if they are approved by the community.

Average cost at the pump is climbing!