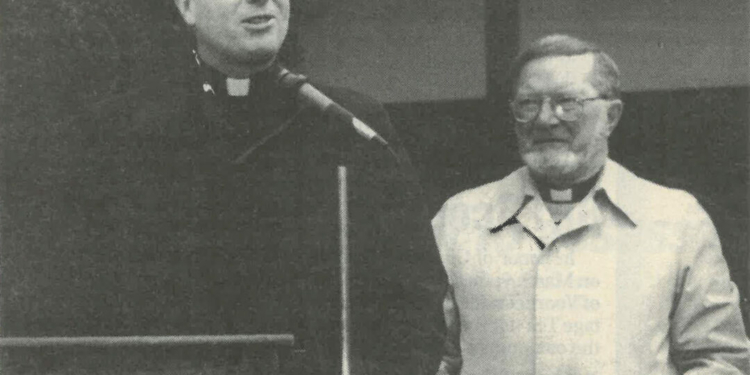 DELMAR — Rev. James Daley, a longtime pastor of St. Thomas the Apostle parish and who oversaw the renovations of the church that stands in the middle of town, was named in a summons of complaint filed in state Supreme Court in Albany County for alleged sexual abuse.

Bishop Edward B. Scharfenberger announced today that he has asked the independent Diocesan Review Board to offer advisement on the following clergy, each of whom has an allegation of child sexual abuse filed against him through the Child Victims Act.

Scharfenberger identified Daley along with Rev. Dennis Murphy and Rev. Nellis Tremblay in his announcement. None of the three serve in public ministry due to illness or age.

Scharfenberger said all of them maintain their innocence.

A summons was filed with the state Supreme Court in Albany County naming the Roman Catholic Diocese of Albany as a defendant on Monday, July 26 in a lawsuit that names Daley. The unnamed plaintiff was identified only as “AL 245 DOE.”

Daley served the church as pastor for 33 years, from his appointment in 1970 to his retirement in 2002. Prior to that he was associate pastor at St. Patrick’s parish in Troy and taught at Catholic Central High School. He subsequently taught at Mater Christi Seminary in Albany. He was diocesan vocations director before his appointment to St. Thomas the Apostle parish.

St. Thomas is named in the suit along with the diocese. The claim is devoid of details other than that the incident allegedly took place in 1974, when the accuser was 15 years old.

“Each Defendant owed a duty of care to Plaintiff not to place Fr. Daley in a setting that would foreseeably pose a danger to Plaintiff,” the suit states. It further casts blame that the church “knew or should have known that Fr. Daley was not fit to work with children,” and “of Fr. Daley’s propensity to commit sexual abuse and of the risk to Plaintiff s safety.”

The church had within 30 days to respond to the summons.

“The Roman Catholic Diocese of Albany takes all allegations of child sexual abuse seriously,” the diocese shared in a statement issued to the press on Friday, Aug. 27. “The diocese urges anyone who as a child was sexually abused by a Catholic priest or deacon to report the matter to a law enforcement agency or to the diocese.”

Daley served as a pastor at St. Thomas church for 33 years. Prior to his 65th ordination anniversary tribute in 2019, his congregation remembered him for providing moving and insightful sermons.

In 1997, St. Thomas broke ground for a fully renovated school. Shortly after the students returned Bishop Howard J. Hubbard blessed the “new School” with Daley by his side.

The diocese said it will conduct its own investigation on the three pastors following current litigation proceedings.

“When the legal proceedings are complete, the diocese will pursue its own investigation, if warranted,” it stated.

A similar summons was issued naming Rev. Alan D. Jupin, a former assistant pastor of St. Thomas on Sunday, July 18, for alleged abuses with a 9-year-old in 1965. He was also named in at least 10 other Child Victims Act lawsuits since 2019.

Jupin was an assistant pastor at St. Thomas from 1963 to 1972. According to files maintained by Horowitz Law in Ft. Lauderdale, Florida, Jupin has stood accused of several more abuse cases throughout a career that lasted until his death in 2019.

Jupin was accused of raping a 16-year-old boy from 1975 to 1979. Most of the alleged abuse occurred at the rectory of St. John the Baptist Church in Schenectady, where he was pastor. He denied the allegations after he was accused in 2003. He was never prosecuted as the statute of limitations expired.

In July of 2020, the diocese announced that it added Jupin to its “List of Offenders” after an investigation found credible allegations of sexual abuse against minors.

New York passed the Child Victims Act in 2019, extending statute of limitations and allowing survivors of sexual abuse to file suit prior to an August 14 deadline. More than 9,200 complaints have been filed as part of the CVA process, including thousands against the Church, health care workers, teachers, family members and the Boy Scout of America. There are more than 320 lawsuits filed against the Diocese of Albany to date. Although the window for filing claims closed, the suits are still being processed and will be processed and served in the coming weeks.

To report an incident of abuse or to seek help, contact the Diocese’s Assistance Coordinator, Frederick Jones, at 518-453-6646 or by email at [email protected]

This story and headline was updated at 6:30 pm 8/27/21 to change that Father Jupin was an assistant pastor not a pastor at St Thomas.

Three Albany County residents die of COVID-19 over the weekend