There are 600,000 first-time stroke victims in the U.S. each year and no one suspected her to be one 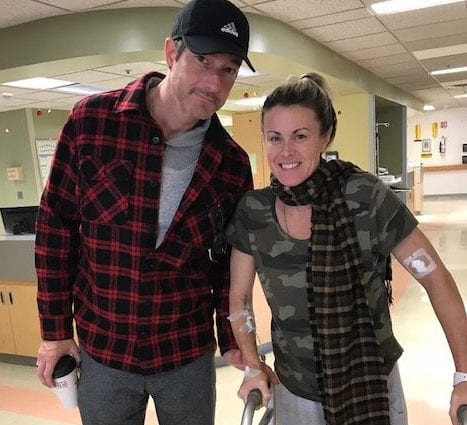 Jennifer DeFazio walks through the hospital with husband Jason as she attends physical therapy after suffering through two strokes. Provided photo

Jennifer DeFazio projects a youthful disposition when you meet her.  The soon-to-be 44-year-old already comes across as an accomplished woman, juggling duties as director of service operations at an IT company, a part-time group exercise instructor at the local YMCA, a certified health coach and a loving wife and mother.

Her lively character also stems from how she stays physically fit and regularly handles her nutrition, dieting, group exercise and personal training.

On her 43rd birthday last year, DeFazio said she felt like she “was in the best shape of [her] life.” She was excited about the new year. But, like 600,000 Americans each year,  she suffered a stroke.

DeFazio said she was having a conference call on speakerphone with her boss at Carousel Industries job when it happened. “I was really excited about the beginning of the year and I had accomplished a lot IT-wise and thought it was a great start to 2019 like this is awesome,” she recalled. “But then out of nowhere, I got severe vertigo and I lost the use of my legs and I collapsed on my desk. The door was shut but I could still yell.”

But since her boss was calling from Rhode Island, he said he was not able to call 911 for her; he stayed on the line with her though and tried telling her to breathe. “Something was wrong and I couldn’t breathe,” she continued. “I reached up and I had two phones on my desk and I was screaming through the wall for help. Some employees came running in and thought I was having an allergic reaction or something.”

After finally calling for an ambulance, Colonie EMS responded to the scene within five minutes and DeFazio was transported to the Albany Medical Center at 2:30 p.m. However, she said that because of her youthful appearance, emergency personnel initially assumed she just had vertigo.

“So, the ambulance brought me in and I was sat in the waiting room for six hours. I just had a stroke and I hardly was able to use my legs,” DeFazio said. “My husband would’ve had to carry me to the bathroom if I need it because I was having a hard time just trying to walk. The ER doctor again told me that at my age, it’s probably just vertigo but I said, ‘Absolutely not. I’m not leaving without a CAT scan.’”

Eventually, DeFazio was approved to get a CAT scan which revealed that she had a vertebral dissected artery. According to the U.S. National Library of Medicine’s National Center for Biotechnology Information, it is a tear in the inner lining of the vertebral artery that is found in the neck and it supplies blood to the brain. It can be caused by neck distortion or bending, blunt trauma or chiropractic manipulation. However, most cases resolve over time with no severe neurological effects; fatal cases are not common.

An MRI, or magnetic resonance imaging scan, also confirmed that DeFazio had a stroke. By midnight, she was being seen by a neurologist, over eight hours since she was rushed to the hospital.

“They realized that the dissection was too big for me to just take Aspirin and go home and let my body naturally heal itself,” DeFazio said. “There was a lot of damage and the blood clot shot through my brain, gave me a stroke and killed part of my cerebellum.”

But just as the doctors recommended giving her a stent to remedy the dissected artery, DeFazio began having a second stroke. Doctors did an angioplasty procedure to widen her obstructed artery and to calm her body down.

DeFazio brought up that her son, who was at the U.S. Coast Guard in Key West, Florida, was able to fly home to visit and stay with her for a week at the hospital. “It was like everything was wonderful,” she recalled. “My husband was there, my son was there and all of a sudden, my blood pressure was going high, low, high, low and there were lots of beeps on the monitor. I remember looking up at my husband and son and saying, ‘I don’t feel good.’”

She explained that when the doctors had been doing the angioplasty and placing a stent in her neck, they accidentally nicked another artery that went to her kidney. “So, I was bleeding out in my kidney and at that point, I was dying,” she said.

DeFazio then had three blood transfusions and was placed in intensive care unit for five more days.

DeFazio said she does not know what directly caused the vertebral dissected artery in the first place but she and her doctors had their eyes on one suspect. “The doctors know it wasn’t health-related but know some sort of trauma happened, whether it was irritated or combined with a bad massage,” she said.

DeFazio recalled how she began experiencing neck pain several months before her severe health issues started. She said she also had been going to a massage therapist to alleviate that pain, including on the night before her first stroke.

DeFazio said on that night, she had gone with a coworker as part of her birthday present. “[My coworker] said [the massage therapist] had his elbow in [my] neck and thank God I told the ER doctor about this,” she said, explaining this information was what spurred the doctors to allow her to get the CAT scan.

Though it’s not clear whether or not the massage session contributed to her stroke, DeFazio said she has no plans to return to her massage therapist.

The road to recovery has since been gradual.

While saying that she is not fully recovered to this day, she expressed optimism that within one more year, she could be. However, she remembered that the first three months in recovery were the hardest and she did a lot of physical therapy, including using a walker and a cane at times.

“The first month was specifically frustrating because being the active and hardworking person I was, this cut me in half and this has been a really tough year,” DeFazio said. “I could only do so much and only go so far before I get tired easily.”

DeFazio’s determined nature was quickly evident as just three weeks after her strokes, numerous Carousel Industries technicians brought her work desk and belongings to her house. Her coworkers also provided a food service for her and she said, “There’s this running joke that my husband can’t cook so what they did was super great and supportive.”

She returned to teaching at the Bethlehem YMCA seven months after her strokes, where she said it helps to distract her. “It keeps my brain not thinking that something bad is going to happen,” she recalled. “That’s the worst of it. And like at home, when it gets quiet, it gets scary. The dizziness is always there because what happened to me affected my inner ear balance and part of my vision.”

DeFazio related this to how it also took her seven months to stop having panic attacks over dizziness. She said that high ceilings, shadows, patterned floors and crowded places are some things that make her light-headed and need a quick break to breathe.

She also brought up that she has suffered from post-traumatic stress whenever she is at her work desk because it reminded her of being where she first collapsed. “I realized it was so much worse in the office,” she said. “And it started becoming a pattern where everytime I see that everything in my office is at the same place, it’s like the same scenario again and I would have to get off the phone immediately and go outside to make sure that what was going on was not real, because I kept thinking that it was going to happen.”

To this day, DeFazio continues to have a few CAT scans, visit her doctor every three months, does physical therapy twice a week, play brain games and use balance balls. “As long as I keep working at it, it’s getting better but it’s not overnight,” she said.

DeFazio said she has learned a lot from her experiences this past year and she expressed gratitude to her family, friends and colleagues for supporting her throughout.

“I truly don’t want to end up being a victim out of all this,” DeFazio concluded. “It’s something that happened and I’m overcoming it. I want this to be something I survive and learn from, and it has made me better as a person.”

LETTER to the EDITOR: Colonie budget in a dangerous position