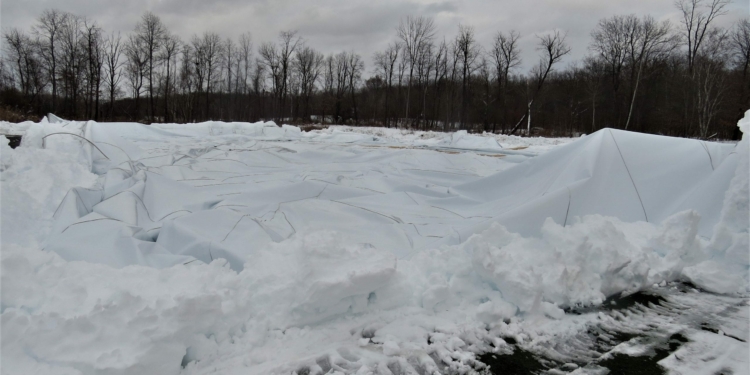 The Bethlehem Soccer Club’s inflatable dome was intentionally deflated last week as it had accumulated too much snow over it. It was just one example of how the early December snowstorm affected everyday life in Bethlehem. Tom Heffernan Sr. / Special to Spotlight News

BETHLEHEM — The town received at least 22 inches of snow from Dec. 1 to 3, making it the largest since the March 1993 snowstorm dumped around 24 inches, according to the National Weather Service.

It also reported that snow kept falling for 39 hours and 14 minutes. Altamont received 19.1 inches, Ravena had 19.8 inches, Delmar got 22 inches, Glenmont was dumped with 23 inches, Voorheesville got 23.8 inches and Selkirk received 24.6 inches. While this snowstorm spurred some into action, it also impacted others’ plans.

Bethlehem Town Supervisor David VanLuven said that the tree lighting ceremony at the Four Corners in Delmar has been rescheduled to Friday, Dec. 13 at 6 p.m. as a result.

However, he said the snowstorm caused the planned annual holiday parade on Friday, Dec. 6 to be canceled. “This was an unusually heavy storm and we have 186 miles of roads in Bethlehem that the town is responsible for maintaining and we had to plow both directions and there was lots of cleanup,” he said. “I felt it was our higher priority for our highway department to deal with this, even with sidewalks, rather than shift their focus to clearing it all for the parade.”

He added, “It breaks my heart to cancel the parade because I love it but I feel like it was the right thing to do.” The cancelation was announced on Tuesday, Dec. 3 on the town’s website and Facebook page.

In Glenmont, the Bethlehem Soccer Club’s inflatable dome on Wemple Road also accumulated too much snow last week. This caused the dome’s owner, Afrim Nezaj, to intentionally perform a controlled deflation for safety reasons and to remove the snow from it. According to the club’s website, the dome’s deflation has caused practice to be canceled for now and the indoor practice schedule will be extended to make up for lost time.

Staff had to ensure the equipment inside was still deemed functional too and as of Friday, Dec. 6, there was still too much snow at the dome’s center section. For more information, visit www.bscny.org/site/ClientSite/article/3413701.

John Anastasi, the town’s highway superintendent, said his crew was prepared for the snowstorm and rotated between using snowblowers, sidewalk plows and snow plowing trucks. “We had numerous breakdowns with the equipment and our mechanics were working all hours to fix them,” he said. “But we handled the storm pretty well. My guys are pretty tired but they did really good jobs and they didn’t complain.”

Anastasi added, “People thought we didn’t hit the sidewalks but we actually did. We brought guys in as early as 3 a.m. to do sidewalks and parking areas on Delaware Avenue, for example, and I was out there with them. A big setback, though, was that everybody was plowing their own driveways and they would throw the snow out on the road and sidewalks.”

He continued, “The state and county plows also came through and they threw the snow onto our sidewalks. It’s like a tug of war. People think the sidewalks aren’t getting done but people don’t realize they may not get it done as quick as they want.”

VanLuven, however, expressed gratitude to the highway department and the long hours they put in to plow the streets and sidewalks.

“They’ve been working non-stop and they were out at 3 a.m. last Wednesday to get the Four Corners cleaned up to get a jump start on clearing more sidewalks,” he said. “I appreciate how our residents have been patient and I hope they recognize it takes time. Our highways folks are the best.”