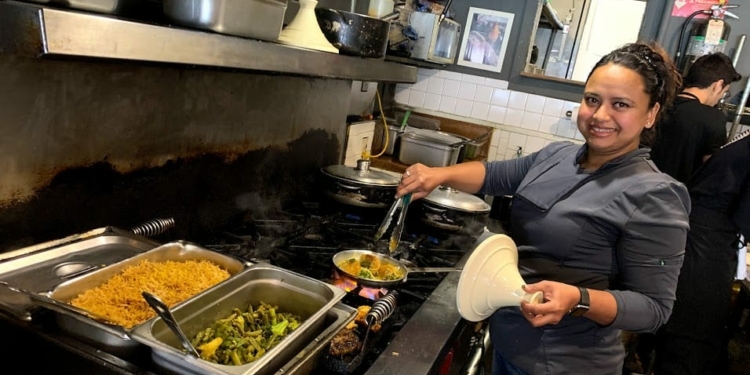 Co-owner Aneesa Waheed was all smiles as her hands seamlessly switched from grilling chicken patties to mixing steaming vegetables and perfecting a salivating offering of rice in the kitchen.

For almost a decade now, Tara Kitchen, a popular Moroccan restaurant, has satisfied curious Capital District customers with its two locations, one on 431 Liberty St. in Schenectady and the other on 172 River St. in Troy. While the former opened in 2012 and the latter in 2017, they will soon gain a new sibling location in Guilderland in spring 2020.

The upcoming Guilderland restaurant will be at 1785 Western Ave.

Waheed said she hopes construction for the Guilderland location will start in early January 2020 and its overall look and menu will not be too different from the Troy and Schenectady locations. She added that she still wants to maintain the exotic Moroccan atmosphere and have an open kitchen to elevate customers’ dining experience.

“When we originally opened in Troy, our goal was to figure out how to replicate our success, process and people, and to check demand,” Waheed said. “Schenectady had also been open for a good five years and no one knew if it would last. We then started thinking about a third location in late 2018 and we started searching for places in early 2019. It takes patience, timing and finding the right geography so that you can set yourself up for success.”

Waheed said that was a question she and her husband/co-owner, Muntasim Shoaib, pondered for some time and they had also looked into Latham, Clifton Park, downtown Albany and Saratoga. However, the chosen Guilderland location, she said, would take advantage of being close to Crossgates Mall, Stuyvesant Plaza, state to its customer base there.

She added that the third location ideally would be close enough to the other two locations “without cannibalizing those other places.”

Waheed is originally from India and met Shoaib, who is from Pakistan, in Morocco. Waheed and Shoaib had lived in New York City prior to moving to the Capital District in 2009.

Then from 2009 to opening the first Tara Kitchen restaurant in 2012, the couple sold Moroccan food at the farmer’s market in Schenectady.

“The root of our recipes and inspiration is Moroccan and we do a lot of traditional Moroccan food,” Waheed said. “My goal is to always make good food and look at what people like to eat. Our food is super clean — no preservatives or store-bought products — and any ingredient we have is something we prepare onsite.”

When asked what it has been like to work with her husband, Waheed initially chuckled. “We’re just a really good team and we’re each good at a lot of things,” she said.

She explained that she mainly handles the recipes, manages the staff and does much creative thinking about how to elevate the restaurant brand; her husband focuses more on accounting and the buildings’ infrastructure.

“Communication has been a huge key success for us and we’re good at making sure we’re not overwhelming each other,” she added. “We do enjoy each other’s company so that’s a bonus. He’s a really supportive partner and it’s a very delicate balance, especially being married.”

Since Moroccan cuisine is not easily accessible in the Capital District, Waheed said Tara Kitchen has benefitted from how she and her husband often listen to customer feedback, review their financial reports every month, discuss ways on how to improve and they see themselves as “very hands-on business owners.”

Looking ahead, Waheed said she envisions Tara Kitchen to be a global brand one day and she wants to expand it “in every market.” She also said that they are planning to open a Moroccan hammam spa, called Tara Hammam, in downtown Schenectady in late summer 2020.

“In Morocco, the hammam is a tradition that has been around for a long time and it’s a huge part of that culture and country, and it’s something every person takes part in,” she said.

But for now, while people can still go to the Schenectady and Troy restaurants, Tara Kitchen cooking products and jarred sauces are also available at numerous stores and groceries across the Capital District as well as in New York City and New Jersey.

For a comprehensive list of locations and products, visit www.tarakitchen.com/new-products-2.

For more information on the restaurant and its menus, visit www.tarakitchen.com.