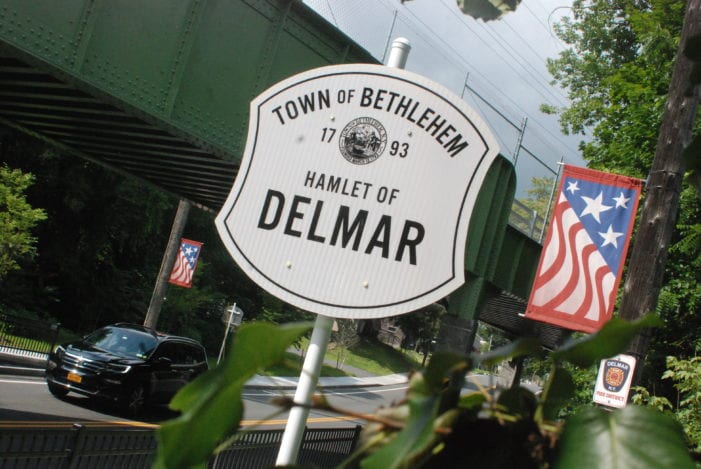 Excuse me if Jeff Foxworthy’s voice crept into your head while reading that. The truth is, people around here are quick to say they live in Delmar when, in fact, they may not.

For many residents, it’s the go-to answer for when they’re asked, “where do you live?” Geographically, Delmar is the center of Bethlehem. Demographically, it’s the largest hamlet with a zip code.

According to the U.S. Census, the Delmar zip code has the largest population (8,292) as it relates to neighboring Slingerlands (7,646), Selkirk (6,775) and Glenmont (6,481). However, each of those corners of town has its own characteristics that distinguish it from its neighbors: Slingerland’s Greek Revival homes, Glenmont’s growing center of commerce and Selkirk’s nostalgic touch of a more rural past.

Somewhere lost in there is Elsmere. True, there are other hamlets within the town that seldom get mentioned in conversation. Say you live in Cedar Hill, for example. You’ll find yourself using Henry Hudson Park or the Red School House as references. Out of frustration, you may settle for Glenmont. We’ve done that, too.

The crux to this identity crisis involves two factors; zip codes and elementary schools. We either associate ourselves with our mailing addresses or the schools in which our children attend. Slingerlands has both a zip code and an elementary school, as does Glenmont. Selkirk doesn’t share its name with an elementary school, but it does with Ravena-Coeymans-Selkirk School District. Delmar carries the distinction of owning a zip code, but no school. Conversely, Elsmere has an elementary school which stands prominently in the center of town on Delaware Avenue. However, it has no zip code. See what I did there?

Residents of “Old Bethlehem,” a term reserved for those whose families trace back generations before the turn of the 19th century, can and will correct you on the boundaries of this town’s many hamlets. It’s a trait Bethlehem Town Historian Susan Leath detailed in the prologue of her first book. The rule of thumb; when measuring out where one hamlet begins and another ends, don’t depend on the U.S. Postal Service. She remembers when Haswell Farms was developed off of Feura Bush Road, developers wanted it to fall under the Delmar zip code.

Leath said the lines that separate these pockets of town are less defined than those stitched onto your blue jeans. They are ambiguous, except to those who wish to find them. Her Elm Estates home has a Selkirk address, though she’s more than a ten-minute drive away. Physically, she said, she’s closer to Delmar. She shrugs her shoulders and smiles.

Longtime residents will agree that the eastern border that separates Delmar from Elsmere is defined by Elsmere Avenue, though this may conflict with the Elsmere Fire District, which stretches across the street. A 1930 insurance map, however, sheds light on another facet of our story. Sanborn Map Company defines a border that splits down the middle of present-day Delsmere Avenue.

The former railroad helps define a portion of Delmar’s Northern border as it crosses over Delaware Avenue. Motorists driving to and from the Four Corners now see road signs before the old Delaware and Hudson rail bridge that depicts which hamlet they are entering. From this intersection, Delmar’s eastern border extends due north to the Normanskill where Bethlehem’s town line meets Albany’s city limit.

Delmar’s western border is another point of contention. Sanborn, dependent upon the fire districts between Delmar and Slingerlands, dissects Kenwood Avenue just east of Homestead Avenue. The line runs southwest from the Normanskill to just beyond Cherry Avenue. The border splits Cherry Avenue nearly halfway between where it intersects with Orchard and Delaware avenues.

A look on Google Maps, however, indicates a more defined line between Slingerlands and Delmar. From the Normanskill, McCormack Road North separates the two hamlets until it intersects with Cherry Avenue. Delmar’s western border then follows the length of both Cherry and Elm avenues.

Another border was established shortly after the opening of the Delmar Bypass in 1963. When the highway was installed, it created a divide. Residents along Feura Bush Road continue to own a Delmar zip code. The Delmar Fire Department maintains a station near the intersection of Elm Avenue and Feura Bush Road. Online, Google Maps uses the bypass as Delmar’s southern border as it extends from Elm Avenue back to Elsmere Avenue.

Leath doesn’t agree with some of the borders, but she’s not quick to correct it either.

“It’s really how people use the name, modernly,” said Leath. “Modernly, those people would say, ‘oh, no. I live in Delmar. Even though our kids go to Glenmont [Elementary].’ It’s always vague. It doesn’t matter. I don’t think it does. The matter, the boundary of the town of Bethlehem, I think that matters.”

SPOTLIGHT ON BUSINESS: NBC’s new branch manager is part of the community