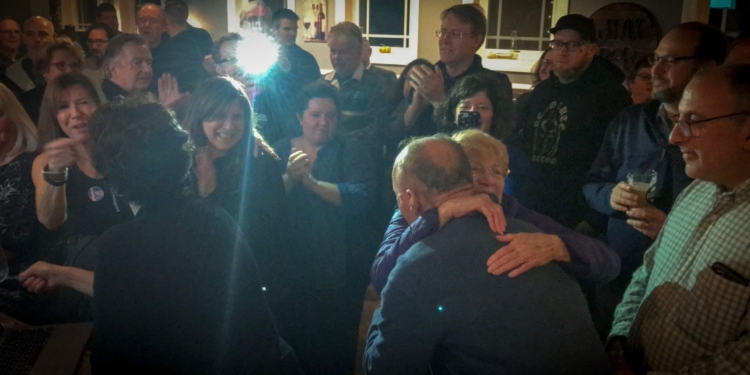 BETHLEHEM – Democratic Town Board candidate Dan Coffey has won in the Nov. 6 general election, scoring 62 percent with 10,061 votes; his Republican opponent, Jim Carriero, scored 38 percent with 6,040 votes, according to the Albany County Board of Elections’ unofficial results.

Coffey, who would assume office in Jan. 2019, and his fellow Democrats were at Twisted Vine Wine & Tap when they found out the results, prompting Coffey to give a speech thanking his supporters and colleagues alike.

In an interview with Spotlight News managing editor Michael Hallisey, Coffey said that looking ahead, he wants to go over the town’s 2019 budget with comptroller Michael Cohen, and also meet with Planning Division director Robert Leslie and Planning Board Chairman John Smolinsky to discuss their concerns and the town’s overall trajectory.

“So that when I get sworn in in January, I’ll be familiar with all the issues and be able to hit the ground running,” Coffey said.

Moving forward, Coffey added that the biggest issue his campaign ran on was open space preservation, which he hopes to work on come January.

When asked why he wanted to run this year for just a one-year term, Coffey brought up how his inability to run on the Democratic ballot line in 2017 helped embolden him to run this year, along with his party fully supporting him this time.

“So that next year, if I run, I’m not running as an outsider. I’m going to run as an incumbent and the voters are going to expect me to have some record to run on,” he said. “So that gives me from January through November to actually try to accomplish something. Because then I can’t just attack the system, I’m going to be part of the system.”

He also acknowledged how his race with opponent Carriero has been civil. “Jim worked extremely hard, he was out there going door-to-door in August,” he said. “He started early, he was out waving signs and I can’t say enough about his commitment to the community. It takes time away from your family and other activities, so obviously he’s committed to the town.”

Carriero also agreed that the race was civil and said that Coffey was a great candidate but there was never any animosity.

“On Saturday, I had to go out and pick up signs, [as] a lot of signs were down and I get out of the car and one of [Coffey’s] signs was down,” he said. “And I got out and picked it up. The person that I was with said, ‘What are you doing?’ And I said, ‘I’m not here to destroy the enemy. I’m here to compete against ideas.’ … I wanted to beat him on policy, not on personality or anger or hate. This is not about that.”

Prior to finding out the election results, Carriero had reflected on this race as “a year where I’ll be introduced to the elector, and so whatever the outcome of it is, in my mind, this was the preliminary show so I learned an awful lot, made some mistakes and learned some important things.”

He said that Coffey has been in politics for 10 years whereas he is a relative newcomer, “so I expected that the first time [running] was going to be pretty tough. … I just love the fact that we’re making democracy better in a community that needs a good shot of that. But we don’t need to be hateful, that’s just unacceptable.”

He has revealed the next morning on Wednesday, Nov. 7 that he plans to run again for Town Board in 2019.

View his comments on this year’s race in this Facebook video below: