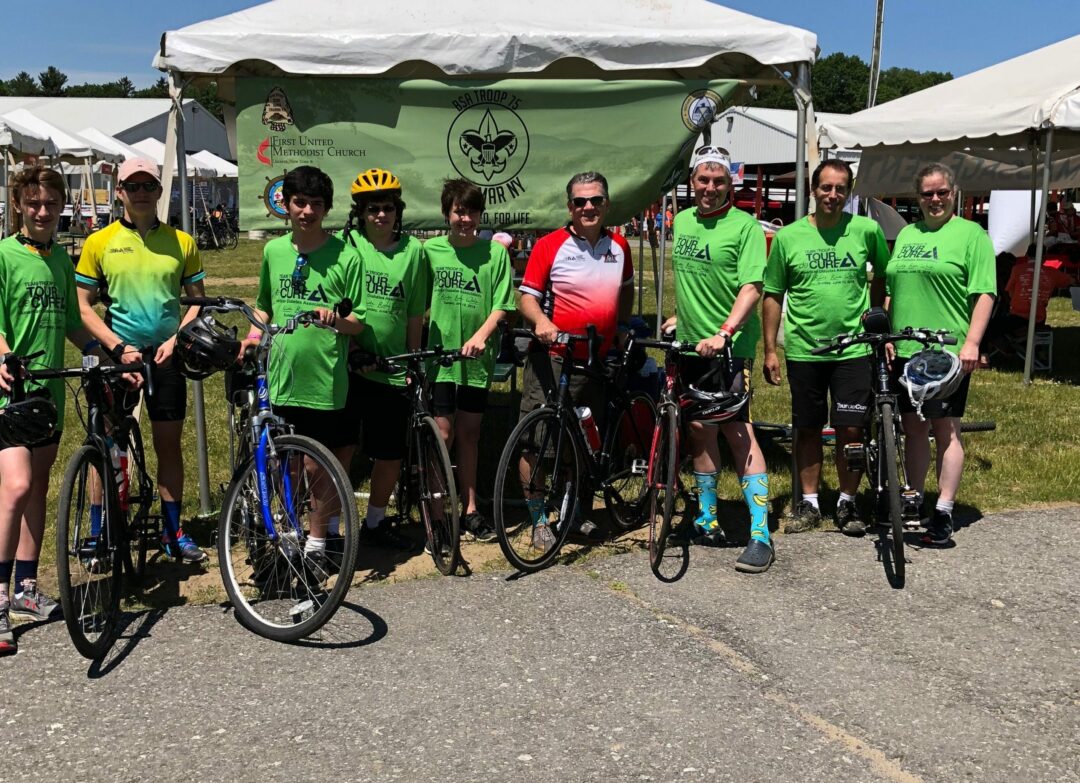 Troop 75 has rasied more than $25,000 in the past four years. Submitted photo

ELSMERE — Boy Scout Troop 75 of Delmar raised more than $8,800 for the American Diabetes Association earlier this month, as its members biked, walked and ran to raise awareness about the disease and fund research to find a cure.

It is the fourth year that Troop 75 has participated in the event, raising more than $25,000, according to Robert Pattison, a troop leader who initiated the tradition and coordinated troop and family participation.

“We have had adults and scouts in the troop who have lived with diabetes,” he said. “So there’s raising awareness about that, and there’s also the personal fitness side. To train and get ready to do a 50-mile ride. And there’s also a cycling merit badge that the scouts work on.”

This year, according to Pattison, the national fundraiser added a new element allowing participants to walk or run, rather than ride a bike. Bikers had a choice of riding for 10, 30, 50, 62 or 100 miles and the run/walk route was five kilometers. Three of the Troop 75 bikers completed 62 miles: Pattison, as well as his son Alexander, and Noah Koch, both Eagle Scouts. In all, 16 participants representing Troop 75 ran, walked or cycled more than 480 miles.

“It was a great ride,” said Alexander Pattison. “There were a lot of uphills, and each one of them was worth doing. I really enjoyed the rest stops, and also the big downhill towards the end! When I came back, I was so happy that I made it, along with my Dad.”

“One of our adults is a Red Rider,” Robert Pattison said, referring to those with diabetes who participate. Those individuals receive special red t-shirts and can join a team of others riding with the disease.

Troop 75 raised more money this year than all but one of the Family/Friend teams to participate in the Capital District event. In appreciation of their efforts, Tour de Cure hosted its members in a tent with tables and special gift baskets, according to the elder Pattison.

“It was cool,” he said. “We had our troop banner out. It was like a big festival. People came out to support those who were participating and there was a live band and all these vendors and kids activities. It was a great event overall.”

More than 1,200 Capital District participants, as well as 300 volunteers, sponsors and spectators, raised more than $550,000 for diabetes research, advocacy, programming and education. All participants received a meal and event t-shirt, and were provided with bike mechanic support and medical personnel on the routes.

Troop 75 is sponsored by the First United Methodist Church in Delmar, where its weekly meetings are held. Anyone interested in joining Troop 75 should email Scoutmaster Doug Kemp at [email protected] or visit the troop’s website at https://www.delmartroop75.org

There’s more to baseball, and a trip to Cooperstown, than just a game