There’s more to baseball, and a trip to Cooperstown, than just a game 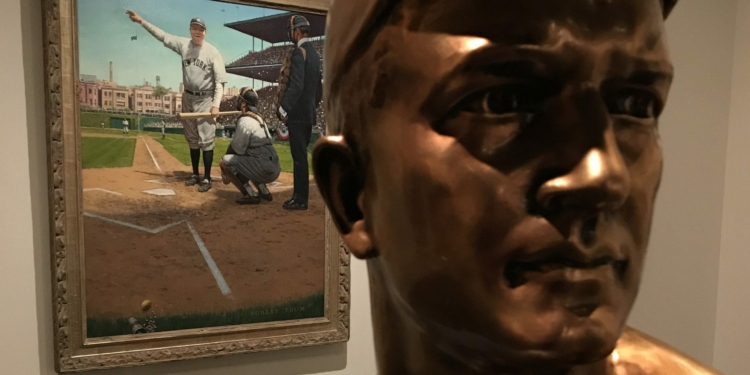 A bust of pitching great Christy Mathewson looks off into the distance as a painting of Babe Ruth in the background captures the slugger as he postures in his famous “Called Shot” during Game 3 of the 1932 World Series against the Chicago Cubs. Michael Hallisey / TheSpot518

On the morning of Father’s Day, someone posts a clip from the movie “Field of Dreams” on the Facebook page for the Institute for Baseball Studies with an innocuous statement wishing all dads a good day.

“It’s getting awfully dusty in here,” replies one reader, followed by a tear emoji.

“Every… Damn… Time,” states another, referencing the punch to the gut that always follows once reaching the end of the Kevin Costner film.

It’s that clip. The often used tool of ignorance wielded by repeat offenders of the unofficial edict that states men do not cry. A benign movie, really, but it ranks among the top tearjerkers for guys in cinematic history. According to Ranker.com, it sits somewhere between “The Notebook” and “Brian’s Song.” But, it’s that final scene. It’s the hook that gets every baseball fan. And, like a fine bottle of whiskey, it only packs a harder punch as we get older. The answer to Ray Kinsella’s “Who?” when confronted with the phantasmal statement, “If you build it, he will come.”

A son playing catch with his father.

Just give me a second.

Baseball is the common denominator to each complex equation that defines who we are as individuals. Black. White. Girl. Boy. Mexican. American. Most of us have played the game, or a variant of it, in our lives. Just, for some of us, we choose to hang on to this intangible force that tethers us to an ideal way of life. A game, played within a structure and form that has seldom changed in more than a century, is the blueprint to Utopia. It hasn’t always been pretty, excluding others for a time, but when it has, it has created lasting memories that help bridge people together.

It sounds like a religion; and for some, it is. For those who feel so passionately for the game, Cooperstown is Mecca. Each year, nearly 300,000 people set a pilgrimage to rural Otsego County with the intent to pay homage to the demigods of the past enshrined at the National Baseball Hall of Fame and Museum.

Cooperstown is the crown jewel of Otsego County, and not necessarily because of baseball. The village sits on the southern shores of beautiful Otsego Lake. Though its 10-square miles may be dwarfed by Lake George’s 45-square miles, its shores are virtually untouched by commercial real estate, allowing one to take in a nearly pristine view of the region.

From the Capital District, the trip is roughly 90-minutes long; about an hour down I-88, and another half hour north on NYS Route 28. All the while, it’s a scenic trip through scores of farmlands and quaint townships reminiscent of how our most of the Capital District looked before the great urban sprawl. That setting enhances the time travel experience you’re bound to feel once you ultimately enter the Hall of Fame.

Because of its close proximity, it’s easy to take Cooperstown for granted. Outside of the Capital District, however, people seek it out. There’s Ommegang Brewery, Glimmerglass and The Fenimore Art Museum. People may even make the connection between the village name and its once famous resident, “Last of the Mohicans” author James Fenimore Cooper. Nonetheless, the area is steeped in baseball magic, and that’s the kind of crowd you will compete against for parking and walking space on the sidewalks that skirt Main Street.

During the summer, Main Street is teeming with Little Leaguers, each with a dual purpose — first, it is to see the Hall; second, it’s to play ball. Since 1996, youth baseball teams from across the nation have come to play at Cooperstown Dreams Park. It’s a complex that now includes more than 20 ballfields. Teams apply to play in one of its continuous tournaments months in advance. The daily action on those fields bubble over into the village, where players, coaches, friends and family go to eat and seek entertainment during their down time. Of course, it all comes to a head on Hall of Fame weekend, which falls at the end of July as more players are enshrined. Note: If you don’t have hotel reservations now, you’ll be staying in Cobleskill.

A visit to Cooperstown requires the purchase of a baseball cap. There are plenty of souvenirs to purchase, either in the museum’s gift shop or the several shops that line up and down Main Street. But, a baseball cap is a must. The best collection of caps — including those found in the museum — is across the street at Mickey’s Place.

The National Baseball Hall of Fame and Museum is located at 25 Main Street in Cooperstown. For more information on the museum and surrounding locations, visit baseballhall.org.