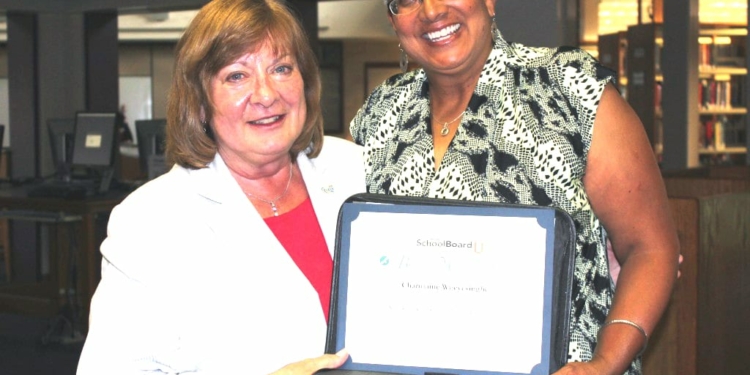 Charmaine Wijeyesinghe, right, is pictured along with receiving a certificate from Lynne Lenhardt. Lenhardt also decided against seeking re-election onto the school board after 20 years of service. Photo courtesy of BCSD

After serving nine years on the Bethlehem Central School District Board of Education, outgoing member Charmaine Wijeyesinghe had some insight and advice for the two incoming members who will take their seats in July.

She decided to leave the board after this term, she said, because, “There were other things I wanted to do professionally and I felt like it was time to dedicate more time and attention to that.” While she noted the fact that her youngest will be graduating from the district this year, she said that wasn’t the deciding factor.

Serving as an effective board member requires a significant time commitment, explained Wijeyesinghe. “Some people think it’s just meeting twice a week, but we all serve on committees and have to take the time to review materials between meetings. So it is a substantial commitment and it made sense for me to be going at this time so I can spend time doing other things.”

“I jokingly tell people my hair was black when I started,” she said with a smile.

Wijeyesinghe joined the board after attending meetings for more than a year in an effort to get them to paint Elsmere Elementary School, where she served as PTA president at the time. “And, as you know, the public comment period for issues not on the agenda is at the end of the meeting. So I sat through a year and a half of meetings. And after watching them and seeing that, wow, they’re covering lots of different issues, I thought, I could do this.”

During her time on the board, Wijeyesinghe said that she gained an appreciation for the complexity of district operations. “It is a complex organization with lots of moving parts, but understanding how many parts and how many people contribute to this district was a great gift,” she said.

“I would tell board members to continually seek out opportunities to understand the role of the board,” she said. “A lot of community members will say they’re interested in joining the board because of a single issue. Being a board member is not a single issue. It’s not defending a single school, it’s not watching out for a single area of the program like athletics or theatre. It’s being mindful of the district’s commitment to all its programs, it’s being mindful of the commitment to the staff and faculty, and you have to be cognizant of the needs of the community, too. So, understanding the role of the board is a fundamental thing that people have to learn and maintain foremost in their minds.”

To serve effectively, Wijeyesinghe recommends that board members take advantage of various training opportunities throughout the year, offered by state and capital area school board associations such as the New York State School Boards Association, which holds regional sessions throughout the year and holds a statewide conference each fall. She also said to not be afraid to ask questions.

While votes are often taken several at a time and without much conversation during the bimonthly meetings, Wijeyesinghe said that thoroughly reviewing the materials between those meetings is extremely important. More divisive or complicated issues can sometimes require more public conversation, she noted, saying that she might even prompt conversation or ask questions she knew the answers to at times when she felt the public might need more understanding of the issue at hand.

“I gained a huge understanding of education,” she said. “And not only that, my family did. Because when my kids were younger, we went through a couple of really tough budget cycles. And it’s all public, so I could discuss it at the dinner table with them.

“For the most part, I enjoyed my time on the board,” Wijeyesinghe said. “I’ve had some great colleagues over the years. I gained a lot of good friends and a real appreciation for the complexity of the organization.

“And,” she added, “it’s a great way to do community service.”

State recognizes two BCSD teachers for their dedication to education