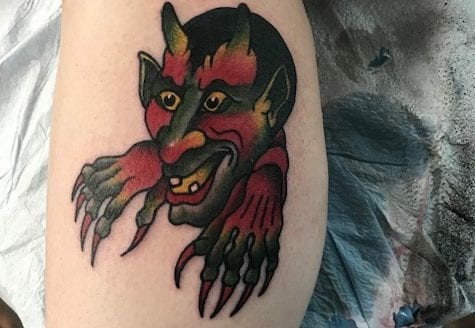 arly Hillmann, of Altamont, shows off her devil’s face tattoo after pulling the sketch from a bubble gum machine as part of Resolute Tattoo’s unique Get What You Get for Charity fundraiser. Ali Hibbs / Spotlight News

DELMAR — A local tattoo shop is giving back to the community, but this act of kindness is not for the timid.

Each month, Resolute Tattoo at 316 Delaware Avenue in Delmar, is choosing a charity to which it will donate the proceeds of its Get What You Get for Charity fundraiser, in which daring tattoo enthusiasts pay $100 to randomly select a capsule from a machine and then get the tattoo they pull out of the capsule—

whatever it is. Only in its second month, Get What You Get has already raised well over $5,000 for charity.

“We do as much charity as we can,” explained Holly Robinson, one of Resolute Tattoo’s owners. “Last week, we did a Mother’s Day flash. We put together a sheet of mom tattoos and we donated the proceeds to benefit the Prevent Cancer Foundation.”

The Get What You Get for Charity fundraiser serves two purposes, she said. Resolute chooses a worthwhile charity to donate the proceeds to each month while promoting classic tattoos at the same time.

“It’s kind of a way to get them out into the world and remind people that they exist and that they’re really awesome,” said Robinson, who has several books of classic designs lying around the place. “So, we wanted to give back in a cool way. Plus, it invites sort of a fun kind of person. Because the uptight are not going to be okay with getting whatever tattoo comes out.”

She said it tends to bring in those who already have multiple tattoos. “There’s some pretty wacky stuff in there,” she said, looking at the capsule machine. “I kept it tasteful, but there’s definitely some weird stuff in there.” A crying baby face ended up on one man’s chest and a pregnant hula girl now adorns another woman’s ankle. “She was aghast when it came out,” Robinson said, laughing. “But she was like, ‘I’m gonna do it no matter what comes out!’ And she did.”

“The most exciting part is watching them see what they’ve gotten,” said Dan Belcher, another tattoo artist and owner at Resolute, as well as Robinson’s fiancé.

Carly Hillmann, of Altamont, pulled a devil’s face out of the machine on Wednesday, May 23, and said, “I love it!” before becoming the 51st “daring and caring” customer in about as many days to let fate choose her tattoo.

“That is a classic Jerry piece,” said Robinson, referring to a style made popular by a former Navy man named Norman Collins, aka Sailor Jerry, in Hawaii during World War II. Collins combined vivid color, bold (and, often, bawdy) iconography and the techniques of Japanese tattoo masters to come up with a new style of tattooing. He was also innovative on a technical level, pioneering modern tattoo machines, sterilization techniques and purple ink.

Hillmann said she heard of the fundraiser and is a fan of the charities they’ve chosen, and she was inspired to take advantage of the opportunity to benefit a good cause and add a little art to her life. “I love dogs,” she said, noting that the tattoo would be benefiting Upstate Underdog Rescue.

Those who would really prefer not to permanently ink themselves with the tattoo they receive are welcome to try again for another $20. According to Robinson, one individual ended up spending $200 before they got one they liked. But, she said, most customers are happy well before that point.

The fundraiser has been so successful that Resolute has begun taking appointments. Walk-ins are still welcome, but there’s no guarantee an artist will be available. In June, proceeds from GWYGFC tattoos will go to Street Soldiers, an organization dedicated to helping the homeless.

“You can always use another tattoo,” said Hillmann.

‘On Your Feet!’, the hit Broadway musical, opens tonight at Proctors