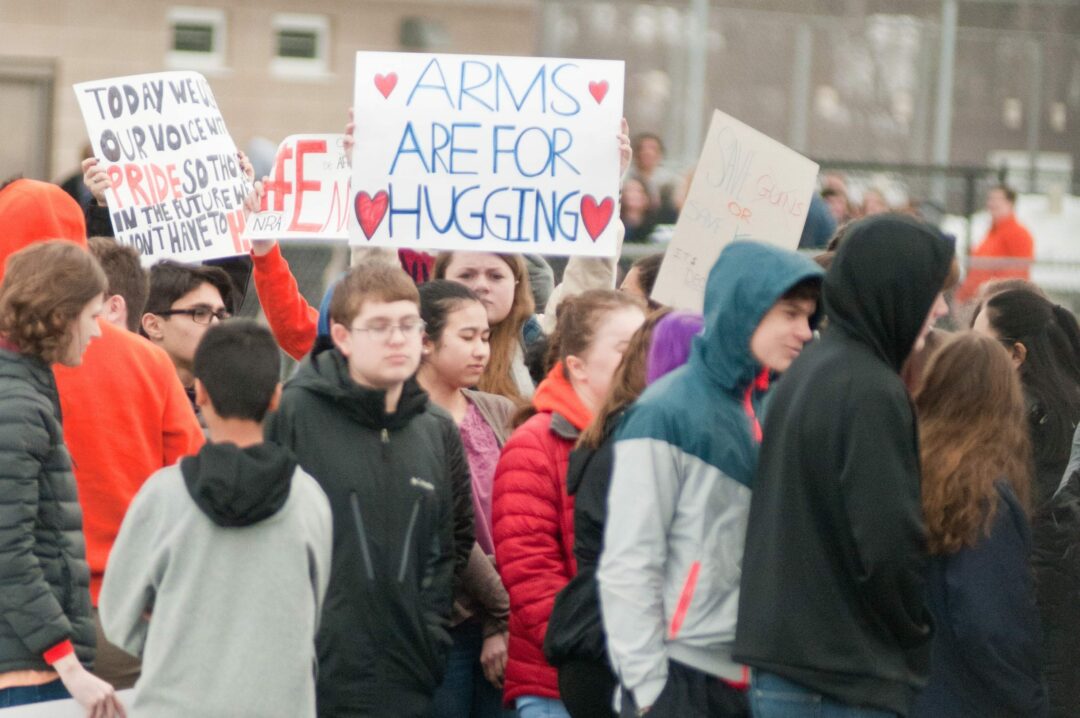 Those students joined others in more than 3,000 schools across the nation to express solidarity with their counterparts at Marjory Stoneman Douglas High School in Parkland, Fla., who lost 14 classmates and three teachers exactly one month earlier, when Nikolas Cruz, an expelled student, opened fire on the school with a semiautomatic rifle.

Students from Marjory Stoneman Douglas, even in their grief, wasted no time in standing up and demanding an end to gun violence in schools, beseeching lawmakers to implement more restrictive gun control legislation that could reduce the likelihood of tragedies like the one in Parkland… or Sandy Hook… or Columbine.

“I remember coming to school the day after the [Parkland] shooting and feeling the discomfort in the student body,” said BCHS senior Josh Hauser, president of the Student Senate and a primary organizer of the March 14 walkout. “It was difficult at first for many to express how they felt, and there was a sense of painful deja vu.” Students had some time to process their emotions over the February break, he said, “and realized that we are the ones who can make a difference.”

The national walkout, which began at 10 a.m. in each time zone, lasted for 17 minutes—one minute for each Parkland victim. While the event was organized nationally by EMPOWER, a youth-oriented arm of Women’s March, each school observed the event in its own, student-led way.

According to its website, the national #ENOUGH movement is demanding “that Congress enact an immediate resolution declaring gun violence a public health crisis and dedicating federal funding to research solutions and implement violence intervention programs.” EMPOWER is also demanding that Congress recognize all forms of gun violence, even that which is committed by police.

The organization is calling for passage of legislation that would:

“I am proud of the 500 or more students of Bethlehem Central High School—and others from the middle school—who thoughtfully and powerfully organized the student walkout to protest gun violence in our schools, and to see them using their passion, leadership and voices to try to make this country a safer place,” said Maureen Cunningham. “I support these young people, our future leaders, and am inspired by the fact that they are joined by thousands more across the country demanding change. We owe it to them to do everything we can to stop this epidemic of gun violence in our schools and society.”

At Ravena-Coeymans-Selkirk High School, students organized a “walk-in,” during which they observed 17 seconds of silence and unveiled a 17 Days of Kindness campaign, meant to encourage their classmates to reach out and connect with other students outside of their peer group.

“Our administrative team has met with these students to listen to their ideas, advise them and ensure a safe and respectful event,” wrote RCSHS Principal Lisa Patierne in an email sent to parents on Monday, March 12. “We are so proud of our students and their efforts to give voice to these heartfelt matters.”

At Guilderland Central High School, the student-organized demonstration involved observing a moment of silence followed by the reading of the names of the 17 Parkland victims, and releasing a balloon in memory of each one. They also recognized the many other schools that have been affected by gun violence.

According to Superintendent Brian Hunt, students at Voorheesville’s Clayton A. Bouton High School organized an assembly to discuss issues of student safety, which they conducted themselves, “with the full support of the administration.” Student organizers showed slides of the Parkland victims and 17 Voorheesville students told their stories before talking to their classmates about emotional support systems that are available to them.

“Although it is purely student-organized (and we are not in any way speaking on behalf of the administration),” said BCHS junior Connor Chung, president of the Students for Peace and Survival student organization and another primary walkout organizer, “we have worked with the administration to keep it orderly—to that end, we’ve received assurances that no one will face disciplinary action for participating, and we’ve arranged for the schedule to be changed slightly such that participants miss no instructional time.” Chung said that the students agreed to a few guidelines and thanked the Bethlehem Police Department for agreeing to provide extra security during the walkout.

While some 500 BCHS students opted not to take part in the demonstration and spent the 17 minutes safely in the school’s cafeteria instead, Chung said that he hasn’t experienced much animosity from classmates with views different from his own.

“There all sorts of ideas on how to address this,” he said, noting that ideas tend to follow grief after events like the one in Parkland, “and quite frankly, that is a dialogue that needs to happen. Even though I have my own passionate views, I think it is vital to have honest conversation with those with whom we disagree—and one of the great things about BCHS is that such dialogues can happen. In fact, they do happen. Although there certainly are differences, nearly everyone I know respects those differences, and values civil discourse as a way of coming together.”

While local district and school officials have overwhelmingly supported student efforts to join the nationwide call to pressure legislators to pass legislation that could keep guns out of the hands of potentially violent criminals, not all administrators have been as responsive. Students in states such as Georgia, Texas and Maryland reportedly walked out under threat of anything from an unexcused ‘tardy,’ to multiple days of suspension.

Critics of the movement have claimed that banning assault weapons is impossible as there is no real definition of what an assault weapon actually is, while others say that an assault weapon is one that has the ability to fire without manually reloading. Still other critics have argued that the ability to 3-D print weapons makes the proposed legislation useless, while others continue to argue that it is not guns that kill people, it’s people. People on both sides of the issue have pointed out that handguns are responsible for more deaths than assault rifles or other firearms.

“By having this demonstration, students will see the power of unity and the strength of passion, said Hauser. “I hope to inspire my fellow classmates to continue this fight.” A representative from the League of Women Voters was on hand to register young voters following the walkout and Hauser said Students for Peace and Survival will be organizing an event for students to write and call their representatives, urging them to act on gun violence. In a few weeks, they will also host Rep. Paul Tonko at a high school town hall focused specifically on the issue of gun violence in schools.

Student activists and supporters will now prepare for the “March for Our Lives” protest on Saturday, March 24. The main event will be held in Washington, with satellite marches planned across the United States and overseas. In Albany, the event will take begin at 10 a.m. and take place on the west lawn of the New York State Capitol at Washington Avenue and Swan Street.

“March for Our Lives” was started by Marjory Stoneman Douglas survivors and aims to pressure Congress to pass stricter gun control laws.

In addition, the Network for Public Education has called for another demonstration to take place on Friday, April 20, the 19th anniversary of the Columbine school shooting. The organization is calling for people to take independent action to bring attention to safety in schools on a “National Day of Action Against Gun Violence in Schools.”

“Our demonstration is just one of many across the nation, but together they are making a loud and clear statement,” said Hauser, “we want our legislators to take action so we can feel safe in our schools, and we want it now.”

HEALTH and FITNESS: My favorite piece of equipment