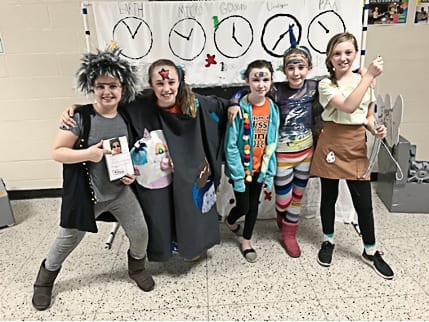 BETHLEHEM—Six teams from the School District—two from the middle school and four from Hamagrael Elementary—competed in the Odyssey of the Mind Region 7 competition at Shenendehowa High School on Saturday, March 3.

“Every team brought their very best to the regional competition,” said BC Odyssey coordinator Betsy Gumustop.

Odyssey of the Mind is a creative problem-solving competition involving students from kindergarten through college. Teams of five to seven members apply their creativity to solve problems that range from building mechanical devices to presenting their own interpretation of literary classics. They then bring their solutions to competitions at the local, state, and international level. While each team has an adult “coach,” the coaches remain hands-off throughout the process, as team members must conceive, write and construct all the elements of their solution themselves. This year’s BCSD winning teams solved problems involving Tolkien, navigating a triathlon course, creating an intergalactic “hangout,” and building and “feeding” animals.

Allison Ryan-Reichman coaches her older son’s Odyssey of the Mind team and helps out with her younger son’s team, which is coached by Rebecca Beiter. Her older son’s team has been together for five years, since they were in second and third grades.

“Odyssey of the Mind is a nearly year-long project,” she said. “The team chooses their long-term problem in August and work for months to solve and present it.

On competition day, they are also given a “spontaneous problem” to solve together that is unknown to the team until the kids walk into the judge’s room.”

The team Reichman’s older son is on generally chooses the “Classics” problem every year. “This year,” she said, “they were tasked with writing and performing a skit that shows a mockumentary version of events for one of five predetermined classic novels: ‘The Hobbit,’ ‘Alice in Wonderland,’ ‘Gulliver’s Travels,’ ‘Peter Pan,’ ‘Charlotte’s Web.’ His team ultimately chose ‘The Hobbit.’ Within each Odyssey problem, there are several limitations or rules; essentially pages of rules the team must follow and work into their skit.”

“My fourth grade team has been together since second grade and has chosen to solve a different problem every year,” said Beiter of the team on which Reichman’s younger son competes. “This year they tackled ‘Animal House,’ which required them to build a structure out of balsa wood that would hold as much weight as possible.” She explained that the solution also required a script that involved an animal leaving home, which they built and decorated out of the balsa wood, and to which they were required to “feed” food that would remain attached once the structure eventually broke under increasing weight.

“Their process began with brainstorming ideas for scripts that might include a group of animals,” said Beiter. “They then researched towers and bridges and looked at the different types of trusses that are used. Each team member designed, built, and tested their own structure and the team chose the design that they all felt was the best to use at competition. Their winning structure had a mass of only 14 grams (about 0.03 pounds) but was able to hold well over 300 pounds!”

“A huge accomplishment for 9-year-olds,” said Reichman. “Each kid gets to bring their own talents to aid the team in what is really a complicated production of writing, performance, engineering, art, set-building, and on-the-spot problem solving.”

Odyssey of the Mind originated with Dr. C. Samuel Miklus, a professor at Rowan University in New Jersey, where he taught an industrial design class in the 1970s, in which he challenged his students to use creativity to solve unique problems, such as designing a vehicle without wheels or a mechanical pie thrower, caught the attention of other educators and, eventually, local media. The first competition in 1978 was only for middle and high school students in New Jersey. In 1980, the first teams from outside of New Jersey, including international teams from Canada, participated. In 1982, the burgeoning organization helped organize local not-for-profit associations to administer the program for the schools and teams in their respective state or country. Today, there are associations all around the world serving thousands of participating schools. Thousands of teams represent nearly every state in the U.S. and approximately 25 other countries.

While some schools take the lead in organizing OotM teams, in Bethlehem it’s parents who facilitate the process and coach the teams, according to Leslie Perrin, who co-coaches one of the middle school teams with Beiter and another parent. “Ultimately, coaches chauffeur kids and props back and forth to practice, secure practice space, take kids out to purchase supplies, supervise, and ask a lot of Socratic questions. We also plan practice spontaneous problems.”

“If you’re a parent putting a team together,” Perrin said, “you’d ideally want kids who get along well, and who have varied talents: dreamers, doers, and dramatics. Or kids who are good at all three!”

“Creative problem solving is a skill that needs to be nurtured and developed, says the OotM website. “While a conventional education is important, learning to solve problems creatively and confidently gives them an important edge in their education and career goals. There is creativity inside each of us and OotM teaches how to tap into it so it can be applied to real-world problems.”

“The most rewarding part for me is seeing them persevere and even shine when things don’t go as planned,” said Perrin. “That is a serious life skill,” she said. “But shhhh, don’t tell them that!”