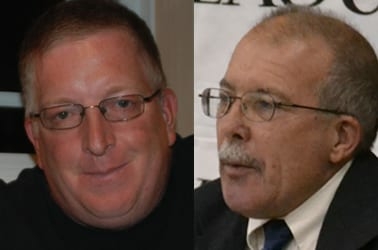 Democrats Dan Morin, left, and George Harder filed a lawsuit that may have resulted in the removal of committee-endorsed candidates from the Democratic ballot line this fall (File photo)

BETHLEHEM — Democrats Dan Morin and George Harder, both running for town positions without the endorsement of the Bethlehem Democratic Committee, filed suit on Monday, July 24, to have two committee-endorsed candidates thrown off the ballot, saying committee leaders improperly filed paperwork naming the recent replacements to their slate of candidates.

The pair is arguing that BCD Chair Jeff Kuhn, First Vice Chair Dan Coffey and Second Vice Chair Pam Skripak, who also comprise the state-mandated “committee to fill vacancies,” failed to sign their names on the affidavit section of certificates of substitution filed on July 12 — one naming Town Board member Giles Wagoner as the new candidate for Highway Supervisor, after Brent Meredith declined to run for re-election to the seat, and another naming Coffey himself as the candidate who would now run for Wagoner’s seat on the Town Board.

All three signatures appear on the certificate naming Wagoner, in the candidate substitution section, but are merely printed in the affidavit section, under a statement beginning: “We, the undersigned, hereby affirm….” The affidavit section of the certificate naming Coffey bears only the names of Kuhn and Skripak. In both cases, all names were clearly printed by the same hand.

While both documents were also signed by a notary public, Morin and Albany County Board of Elections Republican Commissioner Rachel Bledi both said that they believe the omission of actual signatures on that section of the certificate will be sufficient to remove the BDC-endorsed candidates from the ballot.

“An affidavit basically makes every document legal,” explained Bledi. “And, it’s required by law under election law, section 6-148, which deals with filling vacancies. It specifically says you have to have a signed affidavit. That’s basically the gist of the lawsuit. They’re seeking to invalidate the certificates of substitution on the basis of the fact that they didn’t sign the affidavit part at all.”

Coffey and Kuhn said that they have retained counsel and are confident that they will be able to make their case before the State Supreme Court at Albany County Courthouse at 1:30 p.m. on Monday, July 31.

Coffey, who is a lawyer, said, “The paperwork was properly filled out and was properly notarized. Any objections are insubstantial. The standard of the election law is substantial compliance. It was the intent of the committee to fill vacancies to make those two substitutions, and the petition filed by Harder and Morin is completely invalid. They’re trying to deprive the voters of their right to choose in the September 12 primary and we feel confident that the judge is going to rule in our favor and deny the application.”

Pointing out that Kuhn and the notary that signed the affidavit also practice law, he said that Albany Board of Elections Democratic Commissioner Matt Clyne also reviewed the documents before they were accepted. In addition, he noted that Clyne verified the signatures of Morin and Harder on the lawsuit while appearing as a respondent at the same time, which, he said, “seems to be a conflict.”

Morin said the suit was, “pretty much a done deal,” on Wednesday, July 26, and that there would be more to come. He said that he and Harder will release a statement after they go to court on Monday.

“Like I’ve said before,” he said. “This is how corrupt people are and this is finally coming to fruition.”

Following the July 12 announcement of the substitute candidates, Morin criticized the selection of Wagoner and expressed displeasure with the fact that he, like Meredith, was chosen from outside of the Highway Department. He said the committee had broken with precedent when it endorsed Meredith, of whose tenure he was highly critical, and that he doubted how well someone else unfamiliar with the department could effectively run it.

Bledi said while it is legal to switch candidates after petition deadlines have passed, such a move can often spark debate about whether it has been done ethically, particularly in cases in which the original candidate has not died, become seriously ill or offered some other unassailable reason.

“In this situation, they did a certificate of substitution because Brent Meredith got a job with the state,” she said. “Incidentally, I’m sure he knew about it for a while. The state doesn’t just issue jobs overnight.

“It could be perceived as a bait-and-switch,” she said, pointing out that people who signed petitions to help a particular candidate get on the ballot rarely, if ever, have a chance to participate in the selection of that candidate’s replacement in such instances.

Under state election law, the designating petitions for primary races were required to be submitted between July 10 and July 13 this year. The last day to authorize a substitution was July 25.

As outlined in the lawsuit, BDC filed designating petitions naming Wagoner and Meredith as candidates with the Board of Elections on July 10 — a week after closing the interview process that had been reopened following Meredith’s announcement in late June. On July 11, Meredith and Wagoner both filed certificates declining their candidacy for their respective positions. The same day, Kuhn, Coffey and Skripak had the certificates of substitution naming Wagoner and Coffey notarized. On July 12, those certificates were filed and Kuhn publicly announced that the committee had selected replacements.

If the suit is successful, Wagoner and Coffey will not appear on the Democratic ticket in the fall. They will still appear on the Working Families line, however, as they did not use the same state-issued documents available on the internet, but submitted something that appears to have been prepared by a lawyer instead, according to Bledi. “So that was done correctly.”

Speculating that the situation could lead to a split party vote in the general election, she said, “Because you have one set of Democrats who are insurgents sitting on the Democratic line and you have the Democrats who are supported by the party itself on the Working Families party line. So, I don’t know. If you’re not paying attention, you might not realize who you’re voting for.”

“We’ll show up Monday in court,” said Coffey, “and we’re pretty sure they’re going to deny this thing pretty quickly.”