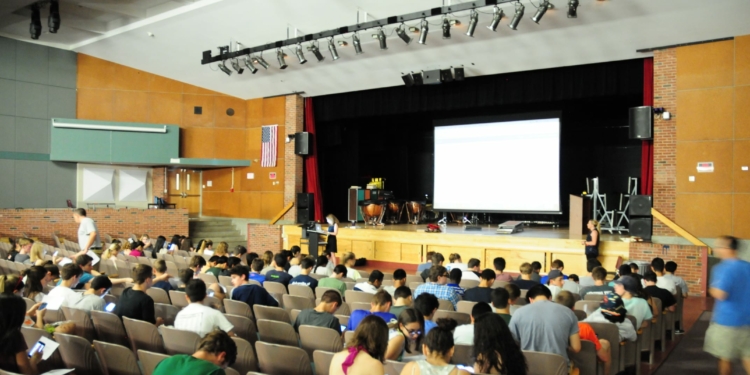 BETHLEHEM — On Tuesday, Nov. 29, Bethlehem Central School District residents will vote on a bond referendum totaling $32,165,551 that, if approved, would be used to pay for 111 separate projects across the district. Under the proposed plan, work on some of these projects could get underway in summer 2018 and could be completed as early as November 2020. The majority of the work — approximately 53 percent — will take place in and around the high school. The building is the district’s largest and serves more than 1,630 students.

Constructed in 1952, the high school auditorium was first used in January 1954 when Bethlehem students moved mid-year from the previous high school on Kenwood Avenue, now the middle school, to the new building. Since that time it has hosted shows, concerts and special events for generations of students and the community at large.

If approved by voters as part of the proposed bond project, the auditorium would undergo an extensive $7.8 million renovation within its existing footprint.

The estimated cost of renovating the space includes both “hard” and “soft” costs. Hard costs include those most often associated with a building project: labor and materials. Soft costs include architectural, engineering, financing, and legal fees, and other pre- and post-construction expenses.

The auditorium renovation, which was identified by the district and the Board of Education as the top priority for a capital investment, would include:

•Addition of a new “fly loft” above the stage to help with concerts and productions. A fly loft is a theater’s equivalent of a vaulted ceiling that allows for easy scene changes and for sets to be stored over the stage.

•Addition of a sound/light control room within the auditorium.

•Addition of a retractable stage extension which would bring the stage closer to the audience.

•Construction of a sound-lock entry between lobby and auditorium.

The auditorium renovation was the focus of much of the public bond project development process. “Because construction of an entirely new auditorium would not qualify for state building aid, that option was deemed cost-prohibitive,” said Superintendent Jody Monroe. “Instead, the district held discussions with staff and community partners who use the auditorium regularly to determine the most appropriate renovation plan. From there, we highlighted the project at several board meetings dating back to May and at community forums held in September.

“The result is a proposal that, if approved by voters, could significantly improve the safety, function and comfort of the auditorium with a modernized school and community auditorium,” Monroe said.

NIGHT and DAY: Mike Gordon at The Egg, Trans-Siberian Orchestra at the TU Center