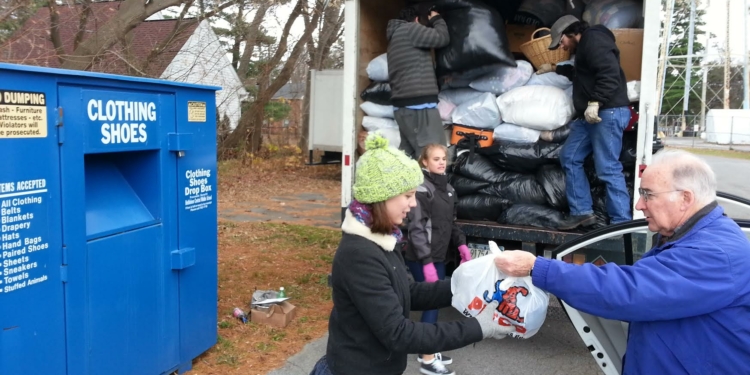 The Town of Bethlehem, BCSD Green Team and Delmar Farmer’s Market are holding an America Recycles Day Collection, open to all area residents, on Saturday, November 19 from 10 AM – 1 PM at the BC Middle School parking lot, 332 Kenwood Ave, Delmar (the Farmer’s Market is inside). Clothing/textiles and books will be collected for reuse and recycling, and secure document shredding is available free on-site for Town residents and BC taxpayers. Pictured: student volunteers Ella Goodwin (foreground) and Rachel Antinucci (background) help unload textiles at last year’s event.

DELMAR — New York residents dispose of approximately 1.4 billion pounds of clothing and textiles each year, according to Bethlehem Recycling Coordinator Dan Lilkas-Rain, with an estimated market value of more than $130 million.

“In Albany County alone, an estimated 21 million pounds of clothes and textiles, with an approximate market value of $3.27 million are trashed every year,” he said. “If all of this material was recovered, not trashed, more than 1,000 jobs could be created across New York State.”

Lilkas-Rain hopes that Capital District residents will take advantage of an event planned in connection with America Recycles Day and donate all unused or unwanted clothing, footwear, bed sheets, unmatched socks and other textiles.

In addition to clothing and textile collection, there will be book collection for reuse and recycling by local charity Grassroot Givers, and on-site secure document shredding (NOTE: shredding is limited to Bethlehem residents/BCSD taxpayers with I.D. only; three medium boxes per household limit).

“We urge everyone to please stop putting clothing into the trash,” said Lilkas-Rain. “Even if it’s ripped, missing buttons, has a broken zipper, or is slightly stained.”

The town is teaming up with the New York State Association of Reduction, Reuse, and Recycling (NYSAR3), the Secondary Materials and Recycled Textiles Association (SMART), and the Council for Textile Recycling (CTR) in the state-wide campaign, entitled “Re-Clothe NY.” Throughout the state, municipalities are encouraging their local residents to “Clothes the Loop” by recycling their unwanted clothing and household textiles, rather than putting them into the trash.

“Typically, clothing and textiles are not considered by the general public, to be recyclable products like plastic bottles, aluminum cans, and paper. We are very pleased to be a part of the state-wide educational effort to get New York residents to recognize the fact that used clothing is a recyclable,” said CTR President, Eric Stubin. “Not only does this remove these items from the waste stream, the EPA reports recycling used clothing has a major beneficial impact on reducing greenhouse gases.”

According to the United States Environmental Protection Agency, more than 13 million tons of solid municipal waste is generated annually that is exclusively clothing and other household textiles; of this amount, 2 million tons, or only 15.3 percent, is recycled.

Individually, the average American puts 70 pounds of clothing, footwear or textiles into local landfills or waste-to-energy facilities every year, even though 95 percent of all clothing and textile products can be reused or recycled into new products. In addition to reuse, the repurposing of textile products includes converting them into wiping cloths or remanufacturing them into products such as home insulation, carpet padding, or sound proofing material.

“Only 5 percent of all textile materials that are donated are ultimately disposed of as trash because they are either wet or are contaminated with oil, paint, or some other hazardous material,” says SMART Executive Director, Jackie King. “As long as the items are clean and dry, even if they are stained or damaged, there is a recycling use for the material. Both non-profit charities and for- profit recyclers often work in conjunction to keep this valuable resource out of the waste stream.”

Residents can also donate clothing, footwear and other textiles throughout the rest of the year by using clothing collection bins and sheds, or dropping them off at their favorite charitable organization. They should not be placed in curbside recycling bins. Find your nearest drop off location by visiting www.townofbethlehem.org/recycling or www.NYTextiles.org.