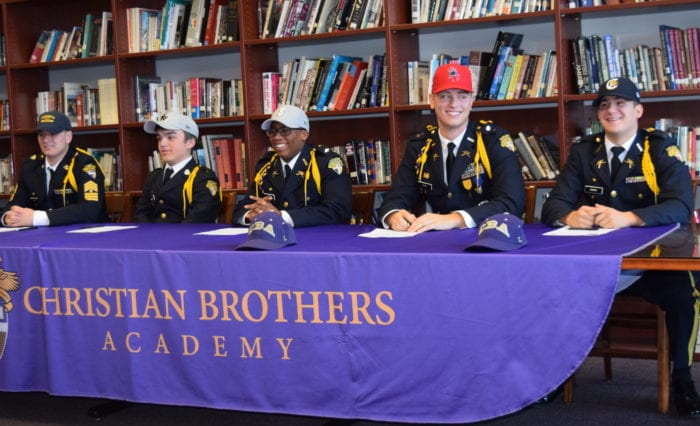 COLONIE — Five Christian Brothers Academy athletes signed their National Letters of Intent at a ceremony Thursday, Nov. 10, at the school.

DeBrino will play college baseball at Canisius College in Buffalo, which is part of the Metro Atlantic Athletic Conference. DeBrino is set to be a starter in the pitching rotation and at second base for the Brothers this spring.

Payne, a three-year starter at first base, will play for the University of Richmond beginning in 2018. Davis led the Brothers in fielding percentage last season (.983), and he has led the team in runs batted in each of the past two seasons.

McHugh will play lacrosse at The College of Saint Rose. The face-off specialist won 55 percent of the center draws last season, and he will serve as a team captain this season.

Isabella will play collegiately at Southern New Hampshire University, which is part of the same Northeast 10 Conference as Saint Rose. The senior is expected to anchor CBA’s defense this spring.

Taylor has committed to Siena College of the MAAC. Recruited to play defense for the Saints, he is equally adept with playing defense or midfield.