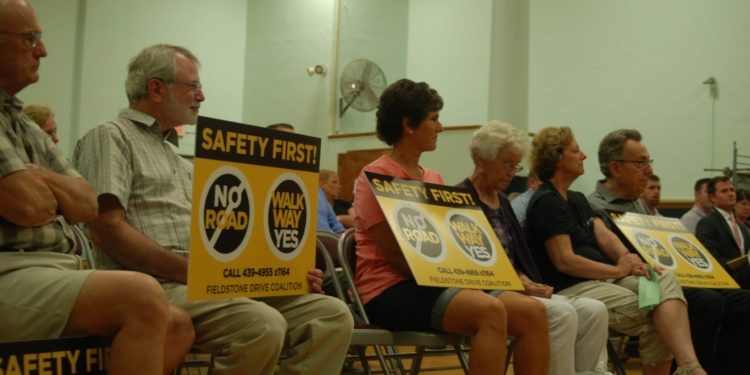 BETHLEHEM—Concerned Bethlehem residents showed up at the town board meeting on Wednesday, August 24, to voice concerns they have about the responsiveness of their town government. The majority of those in attendance were there to raise questions and voice their opposition to a potential roadway that would connect the end of Fieldstone Drive with a proposed subdivision between the Fieldstone neighborhood and Elm Avenue.

The town’s comprehensive plan, to which she was referring, was adopted in 2005 and envisioned Fieldstone eventually connecting to Elm Ave. through an expected subdivision. In defending their stated preference for a vehicular roadway rather than a proposed pedestrian walkway—preferred by both the residents of Fieldstone and the developer, Barbera Homes—town officials have repeatedly invoked the comprehensive plan and its focus on connectivity. Superintendent of the Highway Department Brent Meredith has also lobbied for a vehicular connection because he believes that it would improve the town’s ability to provide services and maintain infrastructure.

“Having a dead-end street is not a great situation when it comes to maintaining and providing services on a street,” he said. “It’s not the best thing for Fieldstone residents, I get it, but it’s in the best interest of the town because the long-term maintenance that we provide, and the services we provide are going to be more efficient on a through-street.”

“My issue with the comprehensive plan,” said a Fieldstone resident and mother of three young children, “is this word, ‘connectivity’ that gets used a lot. I guess I thought connectivity had to do with people in Bethlehem, not trucks. “ She emphasized the safety of the neighborhood and numbers of children used to playing freely in the yards and streets. “That’s all going away if this becomes a through-street,” she said, adding, “I’ve never met a neighbor because they drove by in their car.”

“Not that I agree that kids should be playing in the street,” said another resident, a woman from South Bethlehem. “I don’t believe they should be, but there’s a neighborhood here that wants to change the comprehensive plan and maybe the town should look into that.”

Fieldstone residents, as well as representatives from Murray and Elm avenues, showed up at the town board meeting, according to Fieldstone resident Art Siegel, after attempting to meet with Town Supervisor John Clarkson regarding the issue. Siegel said that Clarkson suggested he attend the Aug. 24 meeting to air his concerns during the public comment period preceding the board’s agenda items.

During the comment period, six residents spoke against the roadway connection and only one spoke in favor—a resident of Shanks Place, the street that would provide one of two other planned ingresses to the new development, said that he feels that having only two entrances to the new subdivision would place undue stress on Elm Ave. and Shanks Place.

“From a traffic management standpoint,” he said, “it doesn’t make any sense for the residents of the new subdivision working in Albany to use Shanks Place or Elm Ave. to access the Delmar bypass. The primary access to and from the bypass should be Fieldstone Drive and Murray Ave. Besides providing a shorter and quicker route, a subdivision connection through Fieldstone Drive is also safer to motorist and non-motorists alike.” Citing more traffic and higher speed limit on Elm Ave., he pointed out that there is no dedicated left-turn lane on Elm Ave. onto Shanks Place, where at least some residents of the 60+ new homes would be turning to get home. The likelihood of a rear-end collision at that intersection, or of a child being hit by a car passing on the left, he said, “would be 20 times higher than it is now.”

“Unfounded allegations of ethical breaches and conflicts of interest,” he continued, referring to a coalition of Fieldstone residents, represented by Siegel, who have requested that Chairman of the Bethlehem Planning Board John Smolinsky recuse himself from deliberations in the Fieldstone/Barbera Homes matter. “Particularly to the media, is a knife that cuts both ways and sometimes it’s surprising where such investigations may lead.”

Siegel expressed surprise at that characterization of the coalition’s request. “We don’t know that there’s a financial conflict of interest or any kind of ethical breach,” he said. “We just want to see things done the right way. When you watch the video of the July 19 planning board meeting, it’s clear that Smolinsky had already made up his mind before listening to residents at a required public hearing. We just want to see due process of law. If we lose our argument after that, that’s something we’ll have to accept, but not until we’ve had our fair and legal chance to make it.”

In the formal complaint sent to the ethics board, requesting the recusal of Smolinsky, Siegel, without speculating as to why, argued that the board chairman has repeatedly made it clear that he has already made up his mind on the issue and posits that such “pre-judgment” is an adequate basis for recusal.

The Bethlehem Ethics Board, sans member George Lenhardt, met at 8 a.m. on the morning of Monday, Aug. 29, to discuss the matter. The board moved to go into a private executive session after a brief discussion with Siegel, who had expressed concerns about the professional relationship between Ethics Board Chairman Michael Fallon and Bethlehem’s town attorney, James Potter, with whom Siegel has been exchanging missives for the last month. Potter and Fallon are partners at the same law firm; Siegel, who is a litigation attorney, clarified to Fallon that he had not asked for his recusal, but hoped that the ethics board would consider securing independent counsel regarding the issue.

The board came back from executive session after a 45-minute deliberation. “The Ethics Board has voted to temporarily suspend our informal complaint review so that we may research and review potentially applicable laws,’” said Fallon. “We will reconvene on the morning of Wednesday, Sept. 7, at 8 a.m., at which time we will go back into executive session to continue our discussion of the complaint.”

After all residents were heard at the town board meeting, Clarkson and Potter spoke on the subject of Fieldstone. “We’d like to help give you background,” said Clarkson, saying that some residents would seemingly like to see the cessation of development in town altogether. While towns have some regulatory authority over certain aspects of development, he explained, they do not have authority to prevent landowners from developing their properties.

“A very important thing that I’m going to ask counsel to explain,” he continued, “is that this is a town planning board issue. Mr. Siegel came to talk to us back in February, expressing concerns. We listened, gave him background from our planning director and said, ‘But you must understand that this issue goes to the town planning board.’

“We, the town board,” he continued, “are not only not responsible for it, but for us to intrude in planning boards processes or decisions is not permitted.”

Invoking a 1979 Attorney General’s opinion, Potter said that Clarkson was correct. “If a town has established a planning board,” he said, “the town no longer has jurisdiction to perform any of the functions which are assigned to the planning board by state statute.

“So while I know the town board appreciates all the concerns that are expressed tonight, these are matters that get addressed to the planning board and the town board has no jurisdiction or approval over whether the subdivision gets built or how it gets approved.”

In a follow-up letter to the town supervisor, Siegel expressed his disappointment at the board’s response. “When we spoke a week or so before the Town Board meeting,” he wrote, “you suggested that we express our concerns during the public comment portion of the August 24, 2016 Town Board Meeting. We were surprised and disappointed when, instead of seriously considering what we expressed, you passed the buck to the Planning Board, indicating that the Town Board was not the appropriate forum for these issues. As our elected officials, who appoint and delegate responsibility to the members of the Planning Board, we expected that you would not bury your heads in the sand and instead show some interest and play a productive role. Under Section 100.2 of the Town Code, the Town Board ‘may refuse to accept a proposed street or highway… if in the judgment of the Board the public interest will not be served by such acceptance.’ Since the issues raised by the Fieldstone Coalition go to the very core of the public interest, safety, environmental protection and proper implementation of the Town’s Comprehensive plan, we insist that the Town Board seriously consider and address our concerns.”