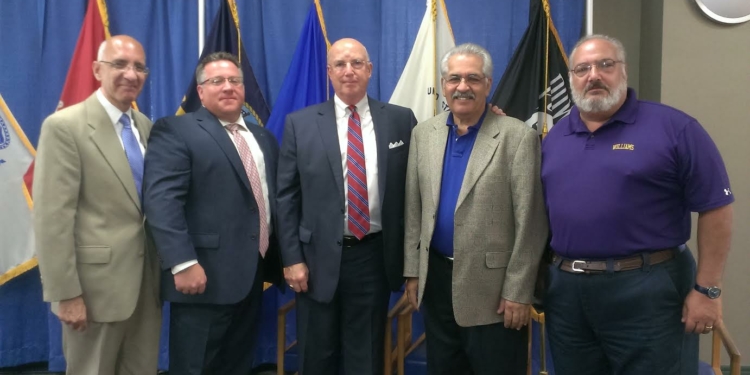 ALBANY COUNTY—Albany County Executive Dan McCoy announced the appointment of Stephen W. Herrick to serve as Albany County Public Defender on Monday, August 29. A judge since 1995 and a County Court Judge since 2002, Judge Herrick is known for his work with the Albany County Drug Court, a program that provides services and treatment options for offenders charged with nonviolent drug crimes. A graduate of Albany Law School, he also served as counsel to the Albany City School District and began his career in the law as an Assistant County Public Defender.

“Over the years Judge Herrick has become one of the most respected jurists on the bench and rightly so,” said McCoy. “His stewardship of the Drug Court over the years has helped thousands of people battle addiction, find another way and avoid jail. We are honored that he will join us as Public Defender. He is keenly aware of the issues defendants face and challenges the county confronts in representing indigent defendants.”

“I thank Albany County Executive Daniel McCoy for honoring me with this opportunity,” said Herrick.  “I look forward to working in partnership with him, his executive team, Acting Public Defender Terry Kindlon and the other attorneys and professional staff of the Albany County Public Defender’s office to help make it the finest in New York State.  I bring with me my many years of experience in the criminal justice system, in effective alternatives to incarceration, and in the greater Albany County community to create an office that will provide the best possible legal representation to those truly indigent defendants accused of crimes in our local and state courts.”

During the last two years, McCoy has worked to overhaul the county’s public defender’s office and advocated for key changes in the program. Following the appointment of former judge Larry Rosen, the county drafted legislation requiring a state takeover of funding for indigent defendants. This legislation was passed by both houses of the legislature during the 2015-16 legislative session and is awaiting action by Governor Andrew Cuomo. Earlier this year, McCoy appointed James Milstein to chair the Regional Immigration Assistance Center, the first such program in the state. More recently, in June McCoy appointed Kindlon to serve as Director of training in the county.

“Indigent criminal defense has emerged as one of the most important civil rights issues of the 21st Century,” Kindlon said last month. “Equal protection of the law has meaning only when the least powerful among us are as zealously and effectively defended as the most powerful. We are beginning a process designed to upgrade and modernize the Albany County public defender’s office to make it a powerful, respected force in the criminal justice system.”

“We are remaking the office and working to balance the scales of justice for defendants in the county,” said McCoy. “This is not just a criminal justice issue; it is a civil rights issue. There are too many people who do not get the representation or justice they deserve and we’re going to change that.”