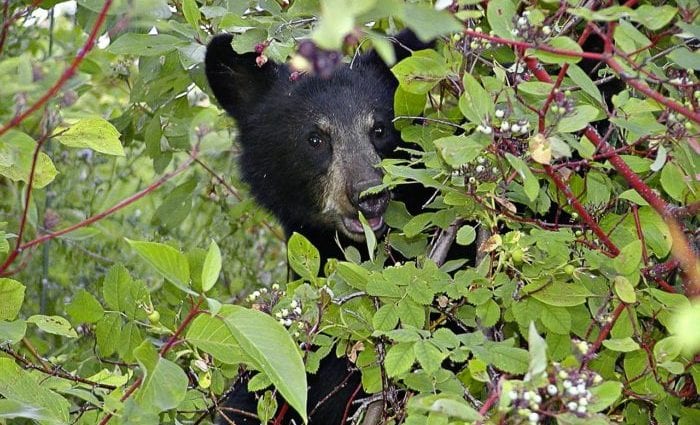 SELKIRK — A bear has been sighted multiple times in the vicinity of Maple Avenue and Thatcher Street in Selkirk, according to the Bethlehem Police Department. The area, said Commander Adam Hornick, is more prone to bear activity due to its proximity to the large areas of vacant land near the Bethlehem/Coeymans border.

According to the state Department of Environmental Conservation (DEC), bears are more likely to seek out human food sources in the spring, when natural food is scarce, and in the summer—particularly during periods of drought.

In New York, the leading cause of bear complaints stem from the animals getting into residential garbage and bird-feeders. Residents in areas prone to bear activity should remove bird-feeders from April 1 through November 30. New York’s black bears begin emerging from their winter dens in late March and bird feed such as suet and seeds are a very strong attraction for them, even if they can’t reach the source.

Other recommendations by the DEC include:

• Not feeding pets outside — leftover food or even an empty dish can attract a bear.

• Removing the grease can from grills after every use

• Not placing food outside to attract any wildlife — as it will also attract bears.

• Not operating refrigerators or freezers outside or on porches — bears can smell what is inside.

• Keeping garbage in sealed garbage cans inside a sturdy building like a garage or shed. (Note: Burning garbage is illegal and may increase its attractiveness to bears.)

• Taking out trash just before your scheduled pickup — not at the curb the night before.

If you frequently find bears foraging in your garbage cans, despite proper storage, purchase a bear-resistant trash container or mask garbage odors with ammonia-soaked rags.

Electric fencing is recommended for keeping bears out of apiaries, chicken coops, compost, and gardens.

Feeding black bears—even incidentally or indirectly—is illegal in New York state; residents not taking adequate precautions could be cited by the DEC for violations.

According to DEC, roughly 80 percent of bear problems can be resolved over the phone with some simple advice, such as that listed above. However, some situations call for DEC Wildlife staff to go into the field to assess or resolve the problem. These situations include bears causing serious property damage, entering homes or buildings, or bears that are in urban/suburban settings and cannot find an escape. Solutions can include aversion conditioning or relocation of the animal; according to DEC “all possible options” will be exhausted before the decision is made to euthanize a nuisance bear that has the potential to become a threat to public safety.

Helpful tips for camping and how to deal with bear encounters can be found on the DEC website at www.dec.ny.gov/animals/6995.html.

Restaurant review: The Stockade Inn and all that jazz