How much in a name: Local dealership faced steep fines for not representing company brand 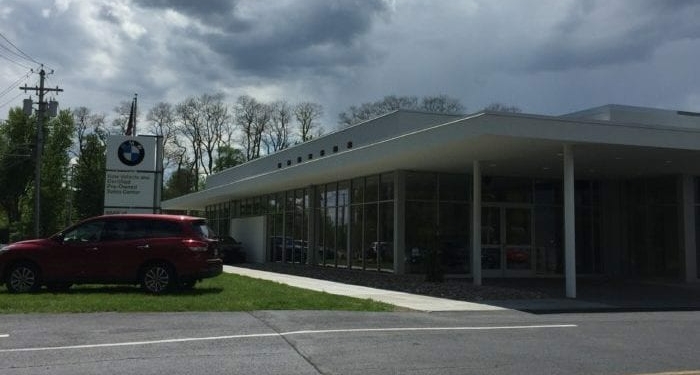 BMW of South Albany asked the town for a zone variance for a new sign. Had it been turned down, the dealership could have been fined as much as $350,000 from BMW. Tricia Cremo/Spotlight

GLENMONT —BMW of South Albany in Glenmont could have been fined $350,000 if the town did not approve their plans for an illuminated sign.

On Wednesday, May 18, the Zoning Board did, granting the dealership a highly sought after zoning variance.

Without approval, the dealership would have been fined $350,000 for not meeting BMW brand standards.

“Long story short BMW pays significant bonuses to the dealer as a result of meeting all of the BMW brand standards,” said applicant John Barber, car manager of BMW South Albany. Referred to as Added Value Programmer (AVP), these guidelines include specific directions on preferred signage at individual dealerships.

“Not meeting all of BMW’s standards results in a 20 percent reduction in our bonus money. This would equate, in 2016, to approximately $500 per new car delivered. Our 2016 forecast is 700 new cars, representing $350,000 [in losses] for not representing BMW brand standard,” Barber said at a Public Hearing for the request on Wednesday, May 4.

This penalty would have been placed on the dealership year after year.

Precedent had been set for Bethlehem Zoning Board to deny BMW of South Albany’s variance request, as the board has denied several sign variance requests over the past year, many of which came from stores on the 9W commercial strip in Glenmont.

Just three months ago, Cumberland Farms on 9W was denied the same request for an internally illuminated sign, just as Speedway on Delaware Avenue was, several months before that.

Board members said the request from BMW of South Albany was different because of the penalty the company would have faced. The dealership had previously been operated under a different name, and, now that it had become a BMW dealership, the penalty for not meeting brand standards could have been placed at any time.

Albany County Planning Board had deferred to local consideration on the zoning request, with an advisory given, as is added with all variance requests, “to consider the precedent-setting nature of administering significant signage variances in a commercial zone,” explained Zoning Board Chariman Dan Coffey.

Coffey was the sole Zoning Board member to vote in opposition to the request, and only to the section requesting for the sign to be internally illuminated, he said, because precedent had been set by the prior denials for the same request. Coffey voted in favor of granting a variance for the sign to be roof-mounted.

With a four-fifths majority from the board, BMW of South Albany was approved for both the roof-mounted sign variance and the internally-illuminated sign variance, but only after ownership  agreed to lower their proposed sign location from the roof to a location on the lip of the roof.

The illuminated letters, to read “BMW of South Albany,” will be placed on the lip of the roof, and will not extend above the roofline, as approved by the Zoning Board.

The dealership owners had also, out of request from the Zoning Board, attempted to gain approval from BMW corporate offices to build a sign that adhered to town signage laws but, as General Manager of BMW South Albany Louis Pavone explained, the process proved too difficult.

Utica Sign and Graphic will construct the sign. Bethlehem Zoning Board will move to approve a resolution approving BMW of South Albany’s zoning request at its next meeting, June 1.

Girls lacrosse: Shaker holds on to beat Guilderland for Section 2 Class A title (with photo gallery)