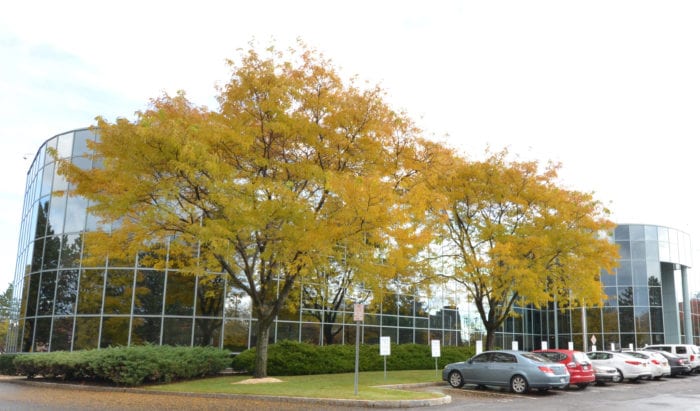 The Rosenblum Companies recently purchased 1 million square feet of real estate from The Beltrone Group, such as this office building at 187 Wolf Road, in front of the Albany Marriott. Submitted photo

[dropcap color=”#888″ type=”square”]C[/dropcap]OLONIE — In a major property transaction that was announced late last month, one million square feet of real estate in Colonie has just switched hands. The Beltrone Group, founded by the late Salvatore Beltrone, has just sold the bulk of its portfolio to The Rosenblum Companies, who, with this deal, is more than doubling the square footage under its management—and moving into Colonie for the first time.

“We’re certainly not strangers,” said Seth Rosenblum, CEO of Rosenblum Companies, which owns properties in Guilderland and Albany. “We’re just a couple of miles down the road and have looked at other potential projects in the town.”

What made this deal so attractive, said Rosenblum and the company’s Executive Vice President Jeff Mirel, was the kind of development currently happening in Colonie—especially in the Wolf Road area where they have just acquired four new office buildings—and the opportunity to further diversify into new areas of growth.

Rosenblum purchased 25 properties from Beltrone, located primarily in the Town of Colonie. The company intends to own and manage 14 of those properties, or approximately 650,000 square feet of both office and warehouse space, including the office buildings on Wolf Road and Winners Circle, which encircles the Albany Marriott just off of Wolf Road.

Office spaces have been the primary focus of The Rosenblum Companies since it was founded in 1979 by Cohoes native Jack Rosenblum; he was the first to develop office space in the Washington Avenue Ext. area that eventually became their eight building Corporate Plaza location.

Seth Rosenblum, Jack’s son, became CEO just two years ago, but he has been running the day-to-day of the company for closer to 12, and recent acquisitions are representative of an intentional shift in philosophy and strategy.

“Seth has really met the high bar that Jack set in terms of really innovating office spaces, and thinking about things like workplace strategy and how to improve the overall experience of the office tenant,” said Mirel. “At the same time, all of the company real estate investments have been in the area of office space. And so, the goal is to continue to do office space at the high level that we always have, but also to diversify the portfolio.”

Rosenblum’s diversification strategy, said both men, originated with a boutique condo project that began in 2009, a $9 million renovation of a former car dealership at 17 Chapel Street in downtown Albany that has been recognized as “a catalyst for the city’s urban renaissance.” From there, the company has expanded into retail space as well, with the acquisition and adaptation of the historic Troy Record building into a mixed-use retail and residential loft property.

Mixed-use is a development concept of which Rosenblum and Mirel are clearly fond. It’s the idea that people—whether office employees or building residents—shouldn’t have to get into a car to fulfill basic needs like eating or shopping. “One of the things we love about the buildings on Wolf Road is their walkability and nearby amenities,” said Rosenblum. “That’s something that tenants in the Albany area really weren’t asking about too much a few years ago but, more and more often, people want to know where their employees can walk to if they want to go out to eat lunch, or what residential options are within a walkable or bikeable distance. One of the key advantages to the Aviation Road and Wolf Road corridor there is the diversity of mixed-use development around there.”

“Wolf Road is probably one of the most active corridors in terms of retail, hospitality, office and now residential,” agreed Mirel. “It’s becoming a true mixed-use power center.”

Another noticeable shift in direction the company has taken—and another reason they found the Beltrone portfolio so attractive—is a shift toward rehabilitation projects like 17 Chapel and the Troy Record building. “We’re looking at opportunities to do urban infill and adaptive reuse,” said Mirel, explaining that it dovetails nicely with the company’s property management philosophy, which prioritizes environmental sustainability.

Rosenblum Companies will continue to pursue attractive ground-up construction projects, but both men extolled the benefits of caring for the good old spaces, and they spoke highly of both the location and quality of the buildings built by Salvatore Beltrone. “You can’t build dirt,” said Rosenblum. “To try to go into that area and build something new would be incredibly difficult. But we want to be able to go in and invest in these great areas.”

“And Sal Beltrone was an accomplished and high-quality builder,” said Mirel. “So the bones of the buildings are really good.”

Residents shouldn’t expect to see too much change, said Rosenblum. “We’re certainly not going to do anything to compromise the green space,” he said. Initial investments will be primarily to update and upgrade the buildings; The Rosenblum Companies prides itself on providing high-end personalized customization to its tenants. “It’s really about the ongoing reinvestment,” said Rosenblum. “What you see too often in our suburban areas here is just kind of a vicious cycle of benign neglect that tends to happen when people own properties for a long time and they may become less desirable than they used to be. We’re breaking that cycle by putting fresh equity and a fresh vision into the properties. We want to keep them generating tax revenue. Colonie has one of the lowest increases over the last few years in tax rates and part of that is because of the growth in the tax base. It’s not just new development that builds that tax base, it’s also sustaining existing development.

“When the town comes in and improves Aviation Road and works on a connector, that’s not just opening up new lands for development, that’s also making existing properties more accessible and eases traffic. Those kinds of improvements by the town make the properties better, which in turn pay more taxes, which in turn keeps the tax base high enough that the property tax rates are low enough and then you see how it just kind of completes that virtuous cycle of making it a place that’s attractive to residents and attractive to businesses.” Both men hope that it won’t be long before there is another roadway connecting Winners Circle with Albany Shaker Road parallel to Wolf Road.

“We’ve gotten the sense that Colonie is very pro-development,” said Mirel. “But it’s also very pro-resident and I think that’s an important balance. You want to keep that tax base up but you don’t want to overdevelop, you want to develop in the right place. I think Wolf Road is a great example of the efforts of the town working with private industry to create responsible, walkable development strategy.”

As a result of the transaction, The Rosenblum Companies has also been able to expand its offices and hire new employees. “It’s a bit cliche to say,” said Mirel anyway. “But the secret of success really is in a team—in that shared commitment to quality and customer service—and we’ve had an amazing team here and we’ve been lucky to find new hires who really complement and fulfill that same attitude.”

The Rosenblum Companies arranged for the sale of eleven other properties acquired in the purchase.  Among the buyers is locally based Rosetti Development Companies, which acquired Village Square Shopping Plaza as well as a 60,000-square-foot office building and adjacent undeveloped parcel at 3 and 2 Lear Jet Lane, respectively. The Beltrone Group, for its part, seems as though it may be liquidating, as this transaction represented a lion’s share of its recent holdings. Calls to reach the office went unreturned and, on Thursday, May 26, the company website disappeared from the Internet.

“I am pleased to welcome the Rosenblum Companies as the latest company choosing to invest in the Town of Colonie. The properties that are part of this acquisition sit on our town’s major commercial corridors, including Wolf Road, where tens of millions of dollars are being invested in new development,” said Town of Colonie Supervisor Paula Mahan. “Sal Beltrone and The Beltrone Group have been forward-thinking, committed stakeholders in the Town of Colonie, and based upon the Rosenblum Companies’ excellent reputation, I expect them to be a great partner, as well.”

Wrestling his way to the top: Zack Carpinello — a.k.a. Zack Clayton — seeks a WWE career

How much in a name: Local dealership faced steep fines for not representing company brand