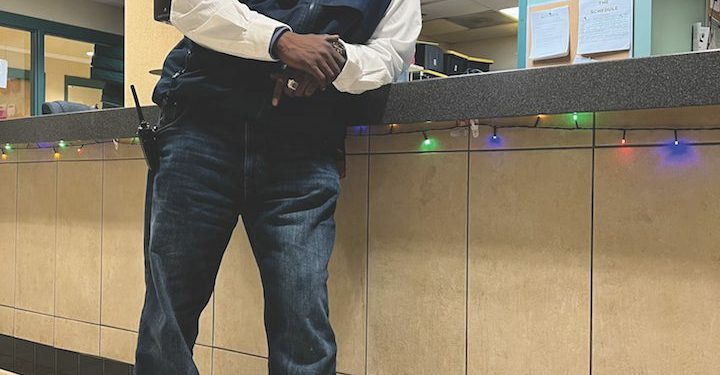 It’s not as important to ask 60-year-old Kevin Anderson how he ended up as the evening supervisor manager at the Capital City Rescue Mission in Albany as it is to inquire what happened to his heart every step of the way.

But in order to grasp how he walked into the role as “The Watchman” of the mission, it’s important to know how his background prepared him for the crises that he handles on a daily basis – and how he might see himself in each one of them.

“An awakening came to me in court one day when they called me a ‘career criminal,’” he said. “It seemed like it was the truth because every time I turned around I was in jail. I was out there hustling and trying to get money the wrong way. I didn’t do well in school because the streets and the money took me, and so I got educated in prison. It’s sad that I did better in prison than I did out here – as far as behavior and learning trades.”

But the “career criminal” label wouldn’t end up defining his identity.

“When I got out,” he said, “I got a job as a messenger. My boss noticed I had a pocket Bible and that I was showing up on time. Another position opened up and it was more money. I was only on the job one month, and yet he chose me. God was teaching me and promoting me. You know how you do a bid in jail. I started doing a bid on the streets. One year went by, then two, then three, then four. The one shocker was that I was called for jury duty. I became a real productive person in society. Then I learned how to pay taxes –  things I didn’t know about because I had come from a real dark world.”

For 10 years, Kevin stayed out of prison. Overconfidence landed him back in jail. However, when he came out, a counselor recommended the Albany Mission. In that program, he met a man with whom he had done a sentence with in Brooklyn. That same person helped pull Kevin in because the battle within was still fierce.

At 50 years of age, Kevin had a fresh start. He got involved with church, went through the mission’s discipleship class, 12-step studies and concluded that he had to take his future by the horns.

“You can’t get away from God when he calls you,” he continued. “When he does, you’re going to come.”

From there, it was just a matter of time.

“I got plugged into the classes and my life changed when I realized, ‘I’m not a victim,’” he said. “I’m just one who has to make changes within myself. As time went on, I really locked into things the guys were teaching in the program. I started volunteering as a resident assistant because I always had a desire to help people. I’ll never forget, that for the first time, it felt so good because I was thinking about helping people instead of myself. I served on the cafeteria line because that’s part of the requirement of the program. I served someone breakfast and it felt so good. I fell in love with serving people, so I made up my mind to go above and beyond to help people. I had done a lot of negative things. So now what I do is a lot of positive stuff. Not religious stuff, but things God likes. And he used me to save lives. I just saved a guy’s life in the bathroom. I can’t begin to count the number of lives we saved; heroin, overdose, knock heads, and everything else. We train for CPR. We do more than people know. When you’re outside looking into the mission, you have no idea.”

What most people don’t know is the degree of the intensity of The Capital City Rescue Mission. There is a constant state of crisis that can only be met with the dedication and compassion of workers like Kevin who are determined to help people who “have lost their way.”

In Part II of this story, we will explore the heart of a changed man.

Robert J. LaCosta is the host of “The Age Sage,” a podcast about seniors doing great things and offering up their wisdom. He is also the writer behind “Portals to Heaven,” a daily online devotional and the author of a devotional book of the same name available on Amazon. Write him at [email protected]