Pearlpalooza hits the streets Saturday, and Empire will throw the after-party 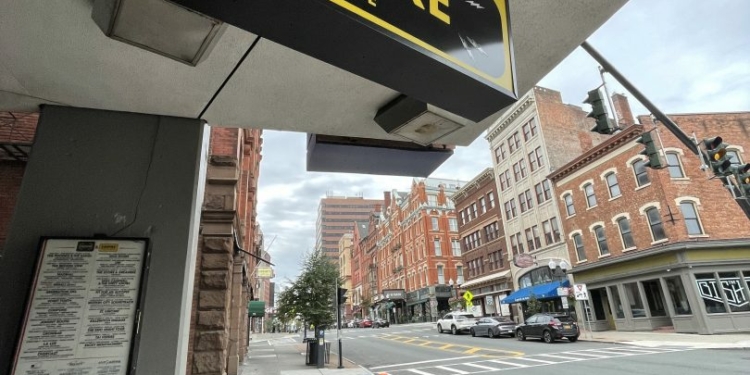 ALBANY — A night of live music hardly goes without a good after-party, and that’s what’s going to happen following Pearlpalooza on Saturday, Sept. 17.

The Luka State is to headline a bill at Empire Underground immediately following the festivities outside at 7 p.m. Bad Mothers and Micky James are to start the after party off once Phantogram leaves the outdoor stage.

The indoor show compliments the annual end-of-summer, downtown block party. Where Phantogram is to perform something out of the ordinary with a planned DJ set to close out Pearlpalooza, The Luke State will shut out the lights with a full-on set of original music.

“We’re looking forward to playing Pearlpalooza,” Josh Carter shared on social media in a video from Los Angeles last week. It’s not unusual for him and Sarah Barthel to appear in front of a crowd behind the turntable. There are videos circulating around YouTube with them working crowds in California. “We’re gonna be spinning experimental… kind of mixing up all kinds of different tunes for you. Get ready to have fun.”

The four guys out of Cheshier, England are on the North American leg of their tour supporting a second album anticipated to come out later this year. Released in May, “Bring Us Down,” has an anthemic punk energy that’s familiar with soccer fans. In addition to frequent playtime at  Manchester United F.C’s home ground Old Trafford, The Luka State’s high-energy vibe is found in soccer video games, too.

“Touring all around North America is a dream come true to a working-class Northern band like us,” the band shared in a statement. “Growing up we listened to a lot of American Rock’n’Roll and Punk so to get the opportunity to play in the same rooms that our childhood heroes did is crazy.

“Really excited to take Micky James on the road with us, too. The guy was brought up on The Beatles just like us as well…America. Bring it on!”

Born and raised in the shadows of Philadelphia and New York City, Micky James developed a taste for the theatrical and said to aspired to become a performer from a young age. In his music and personal style, James explores a sound and aesthetic nostalgic for the glam rock from the 60s and 70s while still maintaining a contemporary pop ambition.

Bad Mothers is a dirty-rock band from Albany, heralded for their consistently hard-hitting performances. They always put on a strong performance on stage, and have come close to opening Pearlpalooza not once, but twice. Signed under Almost Never Dead under exclusive license to Black Country Rock, Rose Record Label Group, the band now hits the prime time section of the show.

Phantogram is set to to take the stage at 6 p.m. It will be the culminating act that is to include musical talents BattleaXXX, Precious Metals, The Kaleidoscope Kid and Whole Damn Mess.

Remarkable Liquids presents Pearlpalooza 2022 as a free event back on North Pearl Street between Sheridan and Pine Streets. The all-day event begins with YogaPalooza, exhibited in front of the stage at 11 a.m.

YogaPalooza, presented by MVP Health Care, is the Capital District’s only street-wide mass yoga gathering returns for its sixth year! Instructors from the Hot Yoga Spot lead a free, one-hour, all-levels yoga class from the stage. It’s presented in association with The Hot Yoga Spot, The Hollow Bar + Kitchen, Best Fitness and the Renaissance Albany Hotel. To participate, register at thehotyogaspot.com.

The music begins shortly after with local, hard-rocking trio, BattleaXXX at noon.

Straight out of Albany, BattleaXXX is said to take their fun very seriously. As Nippertown.com puts it, “BattleaXXX will surprise, shock and delight you; the sassy, catchy tunes and over-the-top clever lyrics will follow you for days after, making you come back again and again.”

The music continues with another power-punch out of Troy, Precious Metals, at 1:30 p.m. Precious Metals is a solo endeavor from singer-songwriter J Lee White. The high-energy alt-rock sound features a rolling cast of contributors, pulling from the early 2000s emo explosion and 2010s indie rock revival.

And as the shadows start to descend, Whole Damn Mess will start playing at 4:30 p.m. Whole Damn Mess packs a punch with their unbridled energy and songcraft. The Los Angeles band – Don Miggs, C.Todd Nielsen, Lawrence Katz, and Greg Hansen – forge an instant connection through familiar rock and roll sounds and anthems.

$5 event parking is available at ParkAlbany’s Riverfront, Quackenbush, and Green-Hudson Garages, just a few blocks from the action! Find more at downtownalbany.org/parking.

Parade to cause Central Avenue traffic slow downs on Saturday