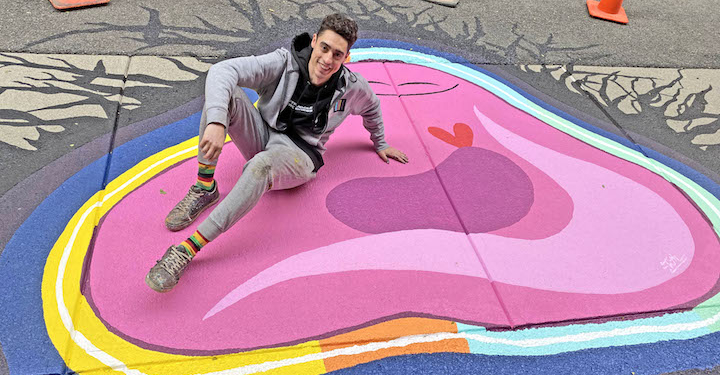 ALBANY — New and colorful designs have spread their wings with muralist Eugene O’Neill’s latest installation on the pedestrian walkway between Beaver and Howard Streets next to the MVP Arena.

The new transformation is drawing crowds and spreading his inspiring message of joy.

“I wanted it to be the most interesting hopscotch board anyone’s ever been on,” O’Neill laughed. A pink, cheerful post printed with “I love you too” is an example of the gentle exchange between the artist and the viewer he wished to create.

Smiley faces adorn the mural. Overhanging lights create an inviting, family-friendly environment that encourages passersby to stop and rest in the vibrant chairs.

The installation, named “Meet Me in the Middle,” replaces what was the sidewalk on Williams Street.

The project began on last June when the Downtown Albany Business Improvement District opened an application process to local artists. Jade Warrick, a muralist and fellow founding partner of The Amplified Voices Project, a locally based program dedicated to youth art mentoring and artists of color, encouraged O’Neill to apply.

“We received a total of 6 applications that met our criteria, and Eugene O’Neill was selected based on his portfolio of previous public artwork and the uniqueness of his proposal,”  Jason Bonafide, Special Events Manager for Downtown Albany Business Improvement District said.

Because of supply-chain related construction delays on William Street, the mural was postponed until the spring, he added.

It was O’Neill’s imaginative approach to his proposal that moved the Business Improvement District to commission him. National Grid’s The Urban Center/Commercial District Revitalization Program, which aids in revitalization and reaching sustainable and smart-growth goals, provided a grant that helped to push the project forward.

Working 12-hour days, O’Neill began the mural. He and his staff, which included one of his Amplified Voices students, carefully sectioned off the progressing art installation from the construction workers and commuters who frequently use Williams Street as a shortcut to South Pearl Street.

Keeping the area clean and finding alternative ways for pedestrians to get to their location was difficult, but O’Neill valued the excitement and respect within the community, as people began counting down the days until the reveal of the finished result.

O’Neill focused on crafting each part of the mural and how it would emotionally impact the viewer. Intuition, purpose, and connection are the mural’s roadmap between heart and spirit, with balance in the middle. In pools of black at the far ends of the mural are impossible triangles, geometrically designed to eternally go inside of themselves. They represent fear, doubt, and shame; stepping off of them onto the colorful mural ahead is intended to be a reminder to keep moving forward. O’Neill described the progression of the mural and its viewers as a butterfly’s metamorphosis.

“By the beginning of it to the end of it, have I changed your mood? That’s magic to me,” he said.

When creating the mural, these choices were intentional for O’Neill. Joy became “the mascot” for the project.

“I wanted adults to feel the whimsical nature of feeling like a kid again, and I wanted kids to feel like themselves. I wanted it to feel safe. I wanted it to feel inviting. I wanted equity to be a part of the conversation in which it could provide value back into the community. A place of refuge,” he explained. “Ultimately, I put a ton of smiley faces all over the design. I just wanted them to feel joy.”

Meet Me in the Middle is a part of a summer of murals for O’Neill. In August, he is planning new mural installations in downtown Troy and Los Angeles, Calif.

“It’s been doing exactly what I want it to do right now, and I couldn’t be happier,” he said.

Even though the distance of the cut through between the buildings is not long, the success of Meet Me in the Middle has been a fulfilling journey for O’Neill and the Albany community from beginning to end.