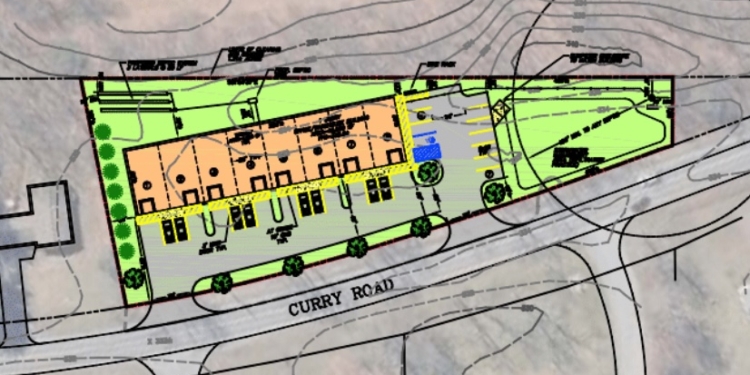 COLONIE — A plan to build a 10,000-square-foot flex warehouse on Curry Road received a cool reception by the Planning Board at its last meeting.

The plan, presented by Luigi Palleschi of ABD Engineering on behalf of Jay Raymond of HELD Companies, would build the 50-foot by 200-foot building on just over an acre of land at 2871 Curry Road zoned Airport Business Area.

It is also within a conservation overlay district, which requires more greenspace. Under the town regulations, 40 percent is required and this project would have 47.6 percent.

There would be 19 parking spots and a private well and septic system. It would be open eight or nine hours a day, six days a week and generate between 10 and 20 tips during the morning and afternoon travel hours.

A flex warehouse is designed to have multiple tenants, each with their own overhead door and entrance, Palleschi said.

“It is generally for smaller contractors where they store smaller equipment indoors. Nothing would be stored outdoors,” he said.

Joe Grasso, the Town Designated Engineer on the site, said the biggest issue is that the project is in a conservation overlay district and as such 40 percent of the unconstrained land must be protected. Unconstrained land is land that could be developed and does not include things like wetlands.

Also, he said, while Curry Road is a “mixed bag” the commercial development mixed in with the residential is not overly intrusive on the area’s character.

“Curry Road has a suburban context to it and although there is a mix of commercial and residential properties, the commercial are developed to add to that context. They are set back from the road with landscaping and parking in the back,” he said. “This project has a long stretch of building along the road with garage doors facing Curry Road and the Planning Board has to determine whether or not this fits into the context of Curry Road.”

He did say the allowable density under the current zoning is 19,000-square-foot building.

While the building is allowable under current zoning, the Planning Board did have some issues.

Palesschi said his hands are somewhat tied with the unusual size of the lot and the 50-foot setback requirement from Curry Road. As such, he said, it is difficult to move the eight garage doors to the back.

“I don’t believe people thought Curry Road would become a Railroad Avenue with warehouses and such. I know there is businesses up and down and churches and commercial but there are certain towns and villages that don’t allow any overhead doors to face the road. I just don’t think it fits the neighborhood,” said Planning Board Chairman Steve Heider. “You are basically going to clear cut this entire lot and it is totally established now with trees of various sizes. It is very dense, and we typically don’t like clear cutting right to the property lines. And you are going to have to make it work for you. I think it has some problems with the size and the looks.”

The plan was before the board as a sketch plan review and will have to come back at least twice more before construction can begin.