Old Songs Festival comes back before a live audience this week 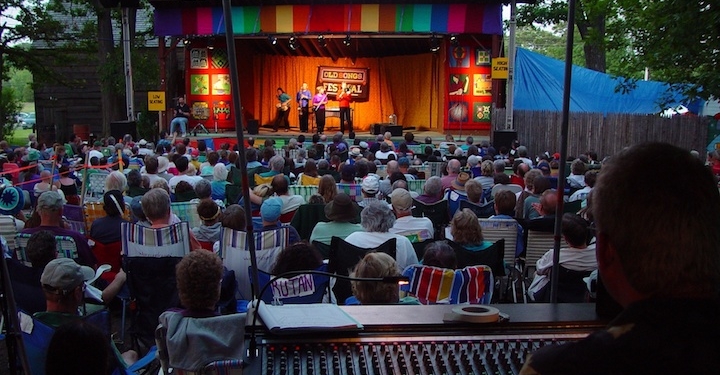 Old Songs is a family-friendly festival of folk, traditional, Celtic and world music and dance, known for its relaxed atmosphere, interactive sessions and workshops, hands-on experience and participatory nature. In addition to evening concerts each night, there are over 100 daytime workshops, dances or performances. Also featured are craft, food and instrument vendors, and a well-run children’s activity area.

Festival organizers encourage audience members to join jam sessions, take part in learn-how sessions, sing sacred harp, move their feet to their great dance bands or take a Friday afternoon class.  School-age children who play an instrument can participate in the “Great Groove Band” during the festival with the help of music coaches and musical instruction, as well as join in on their Sunday performance.

There are three main stage concerts, each featuring multiple artists on Friday and Saturday from 6:30 to 11 p.m., and Sunday from 3:30 to 7 p.m. at the open-air main stage area.

During the day on Saturday and Sunday, there are more than 100 performances, dances, interactive workshops and jams in ten areas around the grounds. An extensive artisan area and diverse food concessions are also available.

Attendees 5-years-old and older must be vaccinated and masks are recommended while indoors or in crowded areas. Tickets can be purchased in advance by visiting festival.oldsongs.org or calling 518-765-2815. Old Songs Folk Festival is located at the Altamont Fairgrounds, Rt. 146 in Altamont.

Aug. 7: An Evening with Rick Bedrosian

July 1: Up the River

Aug. 18: An Evening with Rick Bedrosian

Be sure to check our weekly calendar of events in print each week, and online at TheSpot518.com. forcom.

Protecting Yourself from Growing Cybersecurity Threats