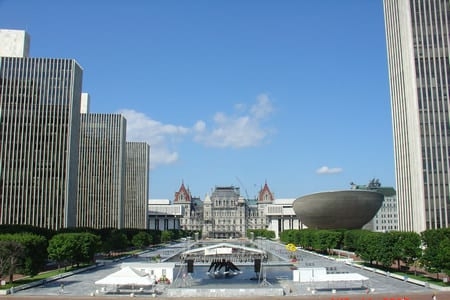 Earlier this month, OGS announced it would be returning to a full lineup of festivals and concerts for the 2022 Summer at the Plaza season, which will kick off on Independence Day with New York State’s Fourth of July Celebration Presented by Price Chopper/Market 32.

The Capital Concert Series Presented by Miller Lite will feature free concerts starting at 5:30 p.m. each Wednesday in July at the Empire State Plaza, beginning on July 6 with the performance by moe.

Hailed by the American Songwriter international website, magazine, and podcast network for their “mind-bending musicality,” moe. is a treasured for their mesmerizing musical synergy, unfettered showmanship, and smart, resonant songcraft.

The band first came together at the University of Buffalo in 1990 as musician friends uniting to play for the sheer fun of it.

For over three decades, the band has corralled myriad musical forms on a truly original journey rich with crafty, clever songwriting and astonishing resourcefulness. Fueled by an impassioned fan base, moe. has spent much of those 30 years on the road, encompassing countless live performances marked by eclectic wit, deep friendship, and exploratory invention.

Impossible to pigeonhole as anything other than simply moe., this one-of-a-kind band has never been easily categorized, with a sonic adventurousness and tongue-in-cheek humor distinctly and undeniably their own.

Truly a live band, moe. is adored by a fervent following for their epic concert performances, each one imaginatively improvisational, rhythmically audacious, and utterly unique. The band has spent much of its 30-year career on the road, including innumerable headline tours, international festival sets from Bonnaroo to Japan’s famed Fuji Rock, music-themed cruises, and soldout shows alongside such like-minded acts as the Allman Brothers Band, Robert Plant, members of the Grateful Dead, Dave Matthews Band, The Who, Gov’t Mule, and Blues Traveler, to name but a few.

OGS will continue to announce the lineup of events and performances for the 2022 Summer at the Plaza season in the coming weeks.

The Fox and The Burn open for business