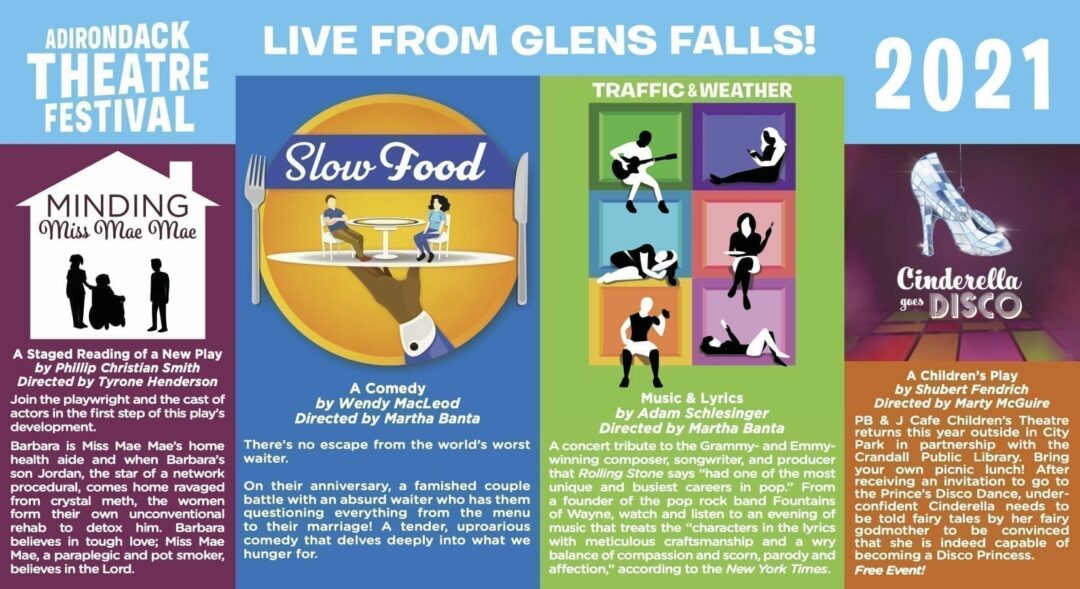 The show features three distinguished Broadway, TV and film actors who have previously performed at ATF, including the two-time Tony Award-nominated actress Johanna Day. Day, nominated for Tony Awards for her Broadway performances in the Pulitzer Prize-winning plays “Proof” and “Sweat,” will also be appearing on Broadway this season in “How I Learned to Drive.” She is joined in “Slow Food” by Tyrone Mitchell Henderson and David Beach.

Day previously appeared in the ATF productions of “Behave Yourself” and “Three Tall Women.” “Three Tall Women” was the first theatrical production in the Wood Theater, performed while the building was still an empty Woolworth’s five and dime store. Both productions were directed by ATF co-founder Martha Banta, who returns this season as interim producing artistic director.

Banta previously directed David Beach in ATF’s “The Family Business” and associate directed Beach in “Mamma Mia” on Broadway. Beach also participated in a new play reading of “The Banana Tree” during ATF’s 2015 season. Henderson has been in three Banta-produced shows at ATF: “Wit,” “Art” and “At Home in an Alien Land,” a play he also wrote.

Day and Beach appear in the Wendy MacLeod play “Slow Food” as a vacationing couple – celebrating their anniversary – who find themselves battling with an absurd waiter who has them questioning everything from the menu to their marriage. This tender, uproarious comedy runs 90 minutes with no intermission.

Adirondack Theatre Festival productions this summer at the Wood Theater require that patrons show valid proof of vaccination (paper copy, digital application or the New York State Excelsior Pass in combination with a valid ID). Social distancing and mask wearing will be optional and not enforced by the theater.

Each evening ATF show at the Wood is preceded by “Shows on the Side” – performed outside in the alley next to the theater starting at 7 p.m. The 30-minute free performances feature some of the area’s most talented musicians; a different artist will be featured nightly.

Grow your business with SpotonDigital

Letter to the Editor: Give Bethlehem Police body cams