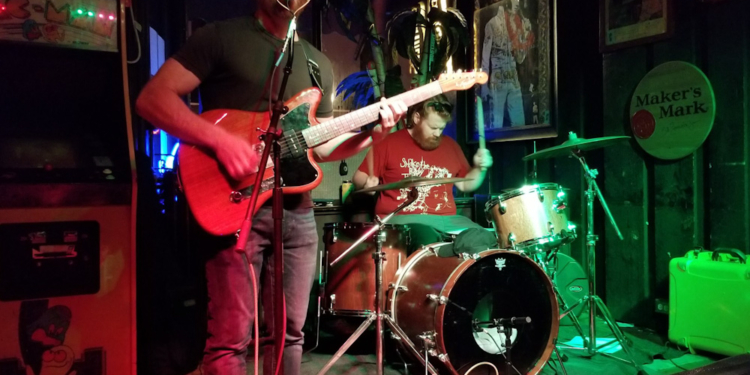 Unfortunately one of the groups scheduled to play, sludge metal band Dirt Church had to cancel playing at the last minute. Luckily, post-rock all star duo dblgoer was able to fill in for them in their intriguing debut performance.

And this was indeed a loud night full of loud punk and noise rock from start to finish.

Albany’s hard/metalcore band Male Patterns furiously started the night in a whirlwind of loud in your face punk rock. As soon as drummer Dan Barker started pounding, several punks in the crowd started slam dancing their hearts out. The addition of Mike Moak’s roaring guitar, KC Carvill’s roiling bass and Brendan Halayko’s screaming baritone vocals set the night afire! Absolute chaos ensued as band and crowd became nearly indistinguishable, all dancing screaming and wildly flailing limbs. Mike Moak jumping in the air while Brendan H. gesticulated wildly with his hands, at times thrusting the mic to audience members during the chorus so they could join in the chorus. Their short, acutely intense set concluded with screams (at least from my seat far from the violence of the pit, yet only a few feet from the ‘stage’) and pointing to everyone in the crowd that “you’re a punk! and you’re a punk! and you’re a punk!” reminiscent of the Ramones multiple tunes about who was a punk rocker now.

There was a brief intermission as duo dblgoer set up their elaborate system of drums, multiple heads and cabinet amplifiers (mic’d of course), a rarely (if ever) seen knucklehead ribbon mic for vocals and two (count em!), two guitar pedal boards! This wasn’t much of a surprise as drummer John Olander is famous all over town and beyond as the ‘sound guy’, more often than not doing the live sound for Super Dark shows when he’s not in one of his many groups performing in them. It was clear that he and Matt Heuston (Che Guevara T-shirt, Glitter of Cohoes) wanted their sound EXACTLY right and perfect for their debut gig.

And it was totally worth it, as Matth and Johnny O played their clearly idiosyncratic and unique sounds to the intrigued room. The crowd was a bit unsure of how to react to this wholly original blend of post and noise rock that’s relatively uncommon around these parts these days, but they clearly enjoyed and were entranced by the fantastic new sounds emanating from the stage (which is actually just the floor in front of the crowd), the guitar dripping with so many dozens of effects the effect became psychedelic, the crisp precise snare hits giving way to the powerhouse fills Olander has become famous for.

This was a great example of what makes Super Dark shows so damn great; crowds’ willingness to see their favorite band and then still stick around and respectfully rock out to the next group that they’ve never heard before, regardless of whether they’re ‘into the genre’ or not; the free format is perfect for going to see brave new music and take it all in. How I’ve missed this! So glad it’s back!

Don’t miss next week when No More Death Stars will play their final east coast show with Machine Revival, or the reemergence of the series of Super Dark shows at Rare Form in Troy with Wet Specimens, Ice Queen and Lone Phone Booth this Friday followed by a noise rock spectacular the following Saturday with Clibbus, Che Guevara T-Shirt, and Scum Couch. So many great shows with so many great groups happening so soon, how can you stand to stay home?

This feature was originally published by nippertown.com.