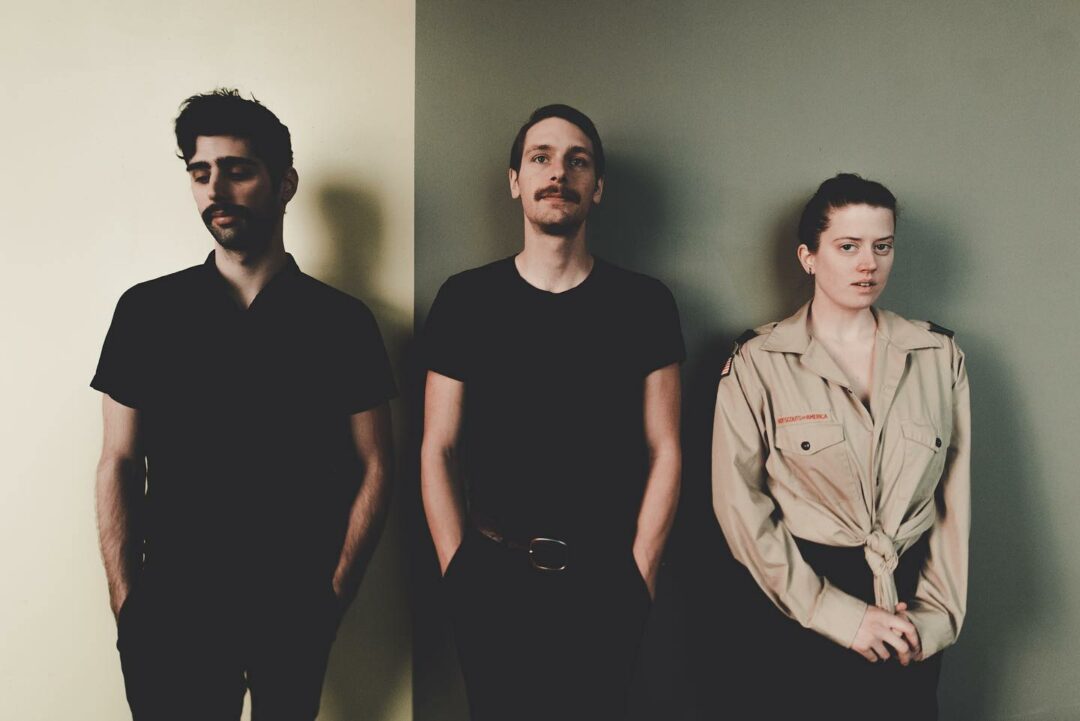 Editor’s Note: Lucas Garrett is a local singer-songwriter and is also a contributor to Nippertown. Here is an interview he recently did with the local band Candy Ambulance, who earlier this month earned a 2020 Thomas Edison Music Award as Alt / Indie Artist of the Year.

Lucas Garrett: Hey, there, everyone. Thanks for taking the time to sit down today! I wanted to first check-in and see how you’ve all been doing during such an unprecedented time.

Jon Cantiello: I’ve been, ya know, aside from not playing out live – or really doing much work as a musician – I’ve been busy just working a job up here in Lake George. And, that keeps me pretty sane. And, I’ve definitely been playing a lot more drums just by myself. So, it’s been good and bad. I’m seeing the positives more than the negatives, recently, since I’ve been practicing more drums. But, not playing out or giving attention to music; it’s been weird. It’s definitely been weird.

Caitlin Barker: Yeah, same. I’ve been doing a lot of, like, lessons and learning theory. So, that’s pretty cool to have the time to be able to do. Starting to get a little bit bored. But, if you’re bored, you’re boring, right?

Jesse Bolduc: Right. (laughs). I mean, kind of the same stuff. Focusing a lot on engineering and mixing. Like I was talking to Jon about; trying to branch out into some different styles. I’m doing some jazz bass, which is fun. It’s a 180 from what I’m used to, but it’s been really cool to push my brain a little bit. Aside from that it’s been a big part for me with all this COVID stuff and lockdowns and everything; trying to stay active, because it’s very easy for me to just like sit inside for days on end. So, staying active and working on my mental health is always a plus. I don’t know we can probably scratch the last 15 seconds of what I just said. Let’s just stick with me playing bass and stuff. Those weren’t very coherent thoughts.

CB: No, that, it makes sense, though. It is hard to keep your mental health in check. Especially with being able to be on my phone [all day] every day has been a huge [pain], honestly. And, I feel like I’ve been consciously trying to not go on really any social media, but then that stresses me out ‘cause then I look on my phone and then I’m behind on emails for the band and I’m behind on people asking us to do stuff like this. So, that kind of stresses me out. It’s just kind of a weird… you gotta find the balance.

JB: Right. Same, yeah. Having constant access to my phone and computers and then TV. It’s like when one screen closes another screen opens.

What new project or projects have you been working on?

JC: Well, us as a group; the latest thing we’ve done is record with Nick and Ellen, and that was back in September, October? I forgot when. But, that was the most recent thing we’ve done as a band, creatively, and we’re just getting the masters back now, which we sent a couple to you. So, we’re kind of in the next step of you know: who do we send this to, what do we do about PR, what would be the proper way to release this? Especially during lockdown when we can’t tour and can’t play shows. That’s us as a group; what we’ve been up to, but other than that, just a lot of solo practice of our own instruments.

JB: It was a really cool process like Jon said. We worked with Nick Kinsey and Ellen Kempner and that was great. That was really exciting for us. They both brought so much to the table musically and creatively. So, yeah, we have something that we’re really excited and so we’ll see what happens with that. Jon and I worked with our buds from our first band over the spring and summer and we put out a little four song demo called, Tauroctony. So, that was fun. That was cool. That was about it for projects.

I had a chance to listen to some new material of yours. Can you elaborate on how these new songs of yours came to light?

CB: Yes, they were kind of written half on the tour before this past one; the one where we went out to the Midwest to do the Mile of Music Festival. I wrote a lot in the backseat which was kind of cool. I haven’t ever been able to do that before. Some of them are about tour. Then, the rest of them were written when we got home from tour. Then, we were kind of in an almost little depressed phase where we weren’t sure what we wanted to do going forward with the band. Some of them are a little bit sadder. Once you get off tour it’s kind of depressing. I think that’s where half of them came from, and half of them are exciting tour stories.

There are always going to be pros and cons to every music scene, but perhaps one benefit that I really enjoy from this area is how everyone in the arts scene around here has a chance to see growth and development amongst the various bands and artists. I’ve definitely sensed a maturity in your songwriting process. How do you feel these songs compare to your previous records?

JC: I’m enjoying the music more and more. With every new song we make, I think we’re getting like you said; more mature. More relatable, and more interesting; the stuff that we’re playing, instrument-wise. I just think there’s a lot more going on than in the past.

JB: Yeah, I agree. Definitely the style that we’re taking or that we’ve moved on to in the most recent album feels a lot more –like you said, Lucas – mature. I feel we’re shedding the “party animal” persona that our music kind of had. I mean, I know I always enjoyed playing whatever we played. But, this feels a little more – for me – sure of itself. And, it feels more well-rounded. It’s been fun.

While no one really has a tenable answer as to how musicians and other folks involved in the overall arts’ industry will proceed going forward, do you have any tentative plans in the horizon for how to proceed? How do you plan to promote your new work, should a tour be out of the question?

CB: We’re definitely just going to be shopping it for a while. I don’t think it’s to anything to where we’re in any hurry to get it released. And, again, I just feel in this state of, “this is a waiting game.” I have no idea what to look forward to. Kind of like where I’m at; sending out emails. Then, who knows? Maybe it’s tour time. Maybe we can tour. Again, obviously we want to. For me, I’m not really sure, I guess, how to approach.

I know I’ve definitely had to find ways to occupy my mind during the pandemic outside of the realm of music, have you folks discovered any hobbies that you’d like to share with our viewers?

JB: I feel like I’ve had to give up on hobbies. I can’t really go rock-climbing, which I’d normally be doing. Me? No, I haven’t found any new hobbies. I’ve been drinking more wine (laughs). Kind of a hobby. How about you, Jon?

JC: Well, I’m fortunate to say that I still have full-time work, but, it’s not really a hobby. But, I’m still learning things at my job. I’m a gardener, but right now [I’m] learning a lot about dry wall and boring things like that.

JC: Yeah, I do like my job a lot. It’s fun and I do learn a lot. But, other than working, I’ve been cooking more; which I don’t think I’ve ever been that good at. But, I’ve been making more food for myself and Angie. And, watching more movies.

CB: I’ve been doing a lot of cooking; trying to hone up on skills with that. I’ve always been a decent cook, but I like learning more refined techniques. That’s been pretty fun. Then, I’m getting really into Scrabble lately. I think I’ve probably read, like, twenty books this year, which is awesome.

What’s your favorite one that you read?

CB: Well, I blasted through the Stephen King Dark Tower Series. That was a whole journey. I honestly like, dreamt it. What is that saying? Live, sleep, eat, and dream, all that [stuff]. For like eight months I was so into it.

JB: Really? Was it good?

JC: Alright, alright, alright. I heard an interview with him promoting the book and I thought, “man, he sounds like such a nice guy. He sounds like he lived a pretty cool life.” And, he did! He lived a [really crazy] life, and he seems to be pretty smart and has kind of a vision for himself and for just being a human and everything. I enjoyed that book. It’s a little preachy and a little, like, you know, an old boomer kind of telling you how to live nicely. But, there are parts that really resonated with me. I was like, “man, this guy seems to have a vision on how to live life.” Good things come your way if you have the right attitude. I really enjoyed that book.

JB: Would you call yourself a McConaughead now?

JC: I am a McConaughead.

Lastly, I want to give you the floor to discuss anything that you feel we may not have touched upon today.

JB: We just did our vinyls. So, that was a really cool experience; recording directly to vinyl. We’ve never done that before.

JB: We had to play thirty songs in a row, so that was wild.

CB: That was intense. That was a lot.

JB: We went down to Brooklyn to a studio there. Banged it out, straight to vinyl.

JC: Other than doing the vinyls, which was… it was hard work; we drove down there, stayed with a friend. Got up the next morning, showed up right on time and, you know, it went very smoothly. I think we all came out of it saying it was easier than we thought it would be; doing it thirty times. As soon as we were done, we got some food – that was the day of the big blizzard – then got back in the car and drove through the snow, which wasn’t that bad. Back to Troy. Then we felt tired. It was like, oh, man, that was intense. People are starting to get them in the mail now. I’ve only heard really good things, so I’m proud of it and happy that we had the opportunity to do something as cool as that.

JB: Yeah, it was kind of fun, too, because you’re playing these songs thirty times and you don’t have time to say, “let’s start that one over. Oh, I didn’t like that one, let’s do it again.” You know? We just had to live with the mistakes. It kind of breathed some fun, creative energy to it.

Balloon Gal Jenny brings color, creativity to the streets of the 518