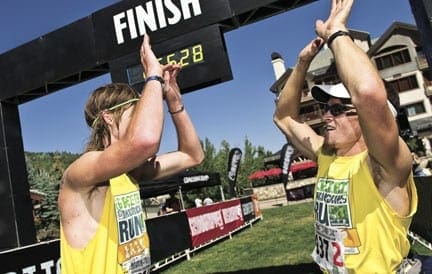 Yesterday my wife and I were out on one of our training rides and we happened to stop and watch a local triathlon.

For those that don’t know a triathlon is an event consisting of a swim, bike ride and run. This particular one was a sprint triathlon which is a 325 yard swim, 11.5 mile bike ride and 3.25 mile run.

We watched as the athletes finished the swim and transitioned to the bike ride. Of course there were the elite athletes, some of whom finished the swim in less than 7 minutes but there was one athlete who struck a chord with us. She was an older, heavyset woman. A woman who many would say had no business trying something like a triathlon.

My wife and I watched as she completed her swim next to last in the entire field. While she wasn’t the fastest swimmer she wasn’t letting that get in her way. As she transitioned to the bike ride we decided to trail behind her and we are so glad we did. We watched as mile after mile she kept pedaling, never stopping even for a single second. As we followed along up hills that even had us winded, she kept chugging along.

Even though she was last in the field by quite a margin clearly there was no quit in her. She just kept pedaling. The heat and humidity (remember we hit 90 degrees yesterday) took their toll but she wasn’t going to stop. It was inspiring not only to us but to the police officers who were monitoring traffic along the route, and along with others, cheered her on.

As she completed her ride we watched in amazement as she got ready to begin her run. Out of breath and clearly tired, she, like the Energizer Bunny, just kept going and going. Although we couldn’t continue to follow her anymore, she inspired us to keep going on our training ride. I mean, how could we stop knowing she wasn’t. That’s the lesson to be learned here.

You see this woman could have been like many others and come up with many reasons why she shouldn’t be doing any exercise let alone a triathlon. She wasn’t an athlete, she wasn’t what many would consider “in-shape” and she wasn’t a spring chicken.

But she didn’t let any of that deter her. Quite the opposite, instead of sitting around on a hot summer day, she competed in an event that even I have had doubts I could do. And it should be noted she didn’t just decide to do this yesterday. No doubt, she spent many, many hours training for this.

I don’t know her name but to her I want to say, Thank you. Thank you for inspiring both my wife and I to not only continue our training ride on a hot, sticky day, but making us commit to joining you in next year’s triathlon. Thank you for showing everyone that age is just a number and that you don’t have to be a size 2 to take on a challenge such as this.

And, thank you for being a winner, because you are a winner.

You see, winning isn’t defined by coming in first nor is it defined by some shiny medal. Winning is defined by getting to the starting line and giving your best effort. Whether you’re first or last is irrelevant. It’s about completing the journey. And complete it she did.

While she and many others in the field could have come up with excuse after excuse why not to do what they did. They got up off the couch and did it anyway.

Proving that if you stop making excuses you can overcome any obstacle through hardwork and dedication.

So if you’re one of those who make up excuses why you can’t exercise, think about this woman. If she can do it, why can’t you?

No matter what you goal is make a commitment to yourself to get it done, because the only sure way to fail is to not try.

Dan Romand co-owns Full Circle Fitness-NY in Colonie, where he is also a certified personal trainer.