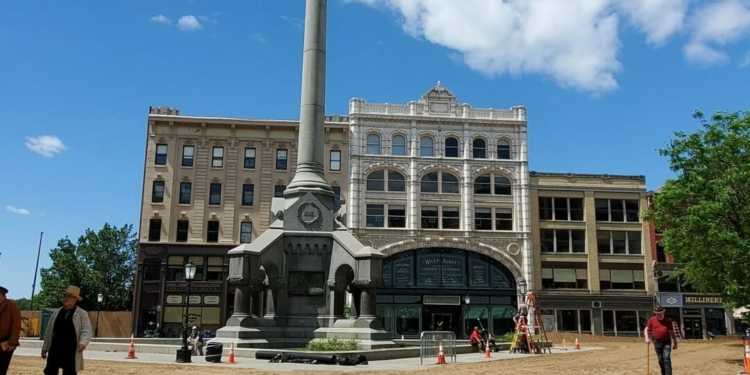 TROY — Madame Collette’s Millinery, Bloomingdale Brothers, and Williams & Wright Co. Corset Shop aren’t the first stores that come to mind when thinking of downtown. But for a short while, when dirt replaced asphalt, HBO’s “The Gilded Age” brought 1880s NYC to the Collar City.

The filming spanned a number of weeks from late May into June and during this time, local businesses located on set were transformed into time-appropriate storefronts. Their names were changed, signs were redone, and windows were darkened.

Most businesses agreed that it was an exciting time, but some pointed out the challenges that came with the drastic changes.

For Annick Ebersole, owner of Annick Designs —which became a plant shop and drug store during filming—, she found the situation to be severely limiting as a jeweler who creates in her shop.

“I make 85 percent of my product; I couldn’t work in here. They sealed up a lot of the windows with the displays and it was very dark in my store,” said Ebersole. “Right now I’m kind of playing catch up, trying to fill in some inventory since I haven’t been able to make anything the full time.”

Additionally, the Farmer’s Market was moved from the street to an indoor location, which she was disappointed to see happen.

However, she noted that the crew was incredibly friendly, and that the production brought new people into the city and to the businesses.

Tom Clement, owner of Clement Frame Shop, or Dewees Brothers Clothiers in 1882 Troy, explained that although it was possible for customers to continue to visit the shops, it was much more inconvenient, and they often needed to be guided through barriers. If filming was taking place, crew members would ask them to wait for a few minutes until it was finished to continue on.

“There was always generally at least one police car at the area that was fenced off and if anybody needed to go through, you’d just talk to him and he’d figure out what the best thing to do was,” said Clement.

Clement said that the inconveniences were worth it because it was exciting to be in the middle of Troy’s transformation. Many shop owners held this same mentality.

Rhe Potenza, owner of Truly Rhe boutique — or law office, stationary store, and real estate agency in the world of the Gilded Age — found it to be “a wonderful experience.”

“As a store, we embraced them, and we had a wonderful time,” said Potenza.

In addition to praising the crew for its attentiveness, she specifically noted that they were very accommodating to her fashion show that she hosts on Facebook Live each Saturday morning. The show, which she started during COVID, helped the shop survive the pandemic, so it was important to her to be able to continue it through filming as well.

“HBO didn’t do anything on those mornings, just so we could have our show…” said Potenza. “It’s a live show so we didn’t want any loud noises, and they were great about it.”

The shop owners all shared that the crew was very respectful of their businesses and offered as much assistance as they could to the store owners.

“They knew that it was very intrusive being here, so they kind of went over the top to make up for it and a lot of them did come into the stores and spend money as well,” said Ebersole.

In addition to daily check-ins conducted by a crew member with each store owner, HBO offered compensation to the shops for remaining open, which was determined through individual negotiations.

“They came and talked to us on a daily basis so we knew what was happening. We’ve had other places film here and we didn’t have that…” said Theresa Van Duyne, owner of T&J Handcrafted Soap shop — or Donoghue’s Hosier and Draper. “It felt really good, like it took some anxiety away because we did have the person coming and speaking to us every day.”

Even though the experiences and feelings of the shop owners varied from one another, they all agreed that it was an exciting experience that was a great opportunity for the city.

“It was surreal, and of course following the shutdown previously due to the pandemic… it was almost like a welcome escape from all the serious, crazy things that are going on,” said Clement.