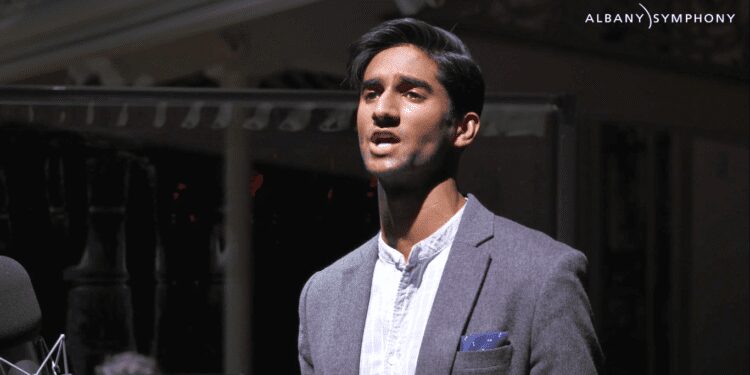 Writers and comedians often need to remain conscious of their audience, but that’s not advice you often share to an orchestra.

Comedians may tweak their material based on what part of the country they’re in, small town versus big city, red state or blue state. Writers, they often keep to the same “voice” repeated in the publication that hands them a check. Orchestras, however, play someone else’s music. That someone else’s music, in turn, is what’s advertised and presumably draws the audience into the show.

The Albany Symphony Orchestra kicked off a reimagined 2020-2021 season with a live-streamed performance of Michael Daugherty’s “This Land Sings: Inspired by the Life and Times of Woody Guthrie” on Saturday, Oct. 24. The television style broadcast featured multiple camera angles and cuts to period-related photographs, establishing a setting for Guthrie’s America juxtaposed with modern technology.

Daughterty’s list of compositions features the inspiration of American icons, from Ernest Hemingway to Jackie Kennedy Onasis and more. With “This Land Sings,” he honors the folk songwriter with 17 measures featuring two singers and a chamber ensemble all bound together with, in this performance, narration from Academy Award-winning actor F Murray Abraham. It captured the bygone days of radio as family entertainment, and a tip of the cap to Guthrie’s time on the airwaves. The composer also pays homage to the folk singer by delightfully borrowing elements from familiar contemporary work, whether it be Peggy Lee’s “Fever” or a hint of “C.C. Rider” to raise the ghost of Elvis Presley.

Albany Symphony’s live-stream experience was near television broadcast quality. The tight camera angles allowed the audience to see each of the players, including the facial expressions of mezzo-soprano Kara Dugan and baritone Michael Maliakel. Abraham’s narration was as entertaining as it was educational. With a thumb in his belt loop and a finger pointing into your chest, he told Guthrie’s story like a true Texan man — he was raised in El Paso.

Guthrie’s life story never interested me beyond learning the words “This Land Is Your Land” in elementary school. Even while a school kid in Texas, we didn’t learn much about the songwriter behind the words. Saturday’s performance was not without an exhibition of masks and social distancing. The timing of it all, to fall upon the same day as droves of citizens lined the streets to vote. One patron shared a stern word against the “political slant” of the evening. However, it served as an unintentional complement to the composer’s attempt to capture Guthrie. In the dark days of the Great Depression and social strife that followed, he lent a voice to the common people, speaking out against affluent business owners who built their riches off the broken backs of exploited workers. I think it was all too appropriate.