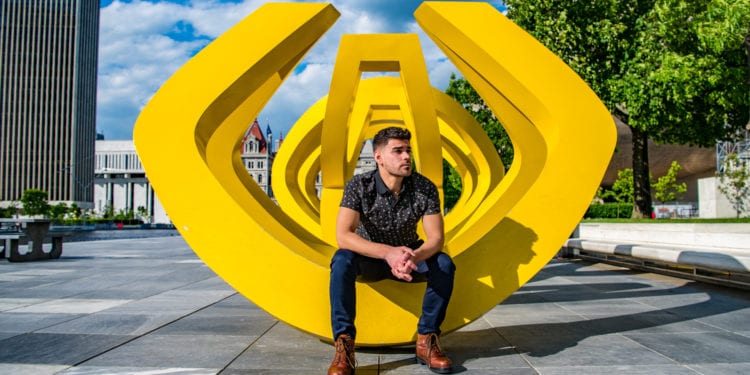 ALBANY — Vince Palmeri has become quite a force in the local pop world. He’s released six singles in 2020 alone, and made a splash with his 2019 singles “The Rush” and “Infatuation.”

Palmeri’s latest release, “Chemicals React,” dropped in August. After a brief wait, the rising pop star released a Halloween-themed music video for the song on Friday. The song features a guitar solo from his dad, musician Vinny Palmeri.

“The idea actually came from Niki Kennedy Reed, who was the main dancer in my ‘Lady Player’ remix video,” Palmeri said. “She got a Halloween vibe from the song and after some thought, I decided to give it a shot.”

Palmeri is a self-proclaimed Halloween skeptic. He’s never felt anything toward it and it wasn’t a big deal in his family. His original idea for “Chemicals React” was playing on high school stereotypes and filming in a high school chemistry lab. When schools were unable to rent out space due to the pandemic, the Halloween idea seemed like a good place to go.

“There are lyrics with words like ‘haunted’ and ‘trapped’ and when I wrote it, I didn’t realize how those could actually have a double meaning,” Palmeri said. “Niki heard it right away and it ended up working so well.”

Palmeri added Reed was the driving force behind the video; she found the dancers, the location and hired the makeup artist. Cameron Gallagher from Black Tie Visuals was behind the camera.

The music video makes reference to several famous Halloween movies, including “Hocus Pocus.” The masks the band wears are a homage to “A Clockwork Orange,” a 1971 dystopian film directed by Stanley Kubrick that plays with topics like mind control, psychiatry and “ultraviolent” crimes.

Palmeri said the song is a poetic approach to some of pop’s most sung-about topics, including love and sex.

“All of my songs come from personal experiences and inspiration I find along the way,” he said. “This one is about that chemical attraction between two people, where you can’t stop thinking about the other person and you feel you need them on a visceral level. It’s not necessarily about true love; it’s more about passion and the chemistry between two people when sparks fly.”

To listen to “Chemicals React” and the rest of Palmeri’s catalog, visit iTunes or Spotify.