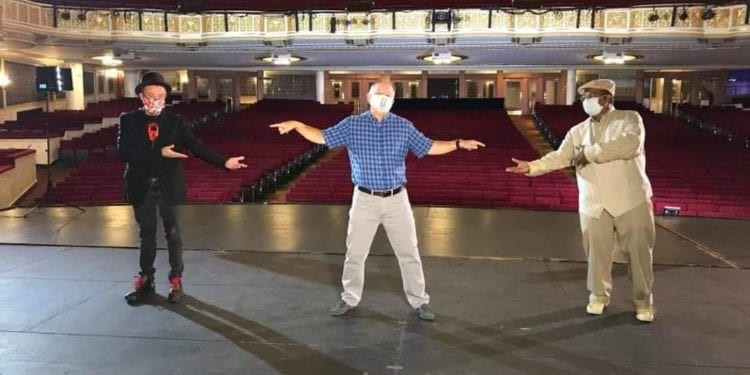 ALBANY — Since 2005, Free Speech Week has been a celebration of one of our nation’s most inalienable rights. Like freedom of religion, press, assembly and petition, freedom of speech allows those within America’s boundaries to speak their minds freely, without fear of legal retribution from the government or a militant body.

As Americans, the ability to say what’s on our mind, and have it printed in community newspapers, isn’t lost on a group of people who are bringing Free Speech Week to the Capital District. Channel Albany, the group behind Free Speech Week, also launched Community Media Day in 2018, a celebration of our community’s news and media sources and the contributions they make.

Free Speech Week will take place from Oct. 19 to Oct. 25 and Community Media Day is slated for Oct. 20. The program includes a movie produced by Zebulon Schmidt of Open Space Media. The movie celebrates how freedom of speech affects people from all walks of life and the women who represent the pinnacle of the idea. It will be available on Spectrum channels 1301 and 1302 at Proctor’s Theatre. Some guests include writer Paul Grondahl, Pastor Katy Stenta, Mary Rozak of the Albany County Executive’s Office and students from the area.

“This year’s event is a little more significant because of the time we find ourselves in,” Schmidt said. “The free flow of information is so important and we know [Open Stage Media] and our local outlets play such a huge part in our community’s dialogue.”

Free Speech Week is a non-partisan celebration of the importance of freedom of speech, according to the event’s website. It adds the week is supposed to be a unifying experience.

Donald Hyman, vice president of Channel Albany, is one of the event’s biggest proponents. You might see him at Alive at 5 manning the backstage area for vendors during the summer months, but he’s been passionate about free speech for as long as he can remember.

“The media is the backbone of this year’s events,” Hyman said. “Everything has gone virtually and the media has helped us stay connected in such a stressful time.”

Hyman is a fixture in the area’s art scene, calling it one of the most talented he’s ever seen. A native of New York City, he’s been smack-dab in the middle of some of our nation’s richest cultures. Hyman understands free speech is one of the many tenants of our country that allows us to prosper and it gives us a multidimensional approach to each situation. Because we are a nation of many opinions and voices, we are better able to face whatever situations hit us, like a worldwide pandemic.

“I’ve seen so many beautiful things in the 518, including in our music scene,” he said. “Now, these same people are forced to go digital and have found ways to shine through community media sources.”

Rozak is the chairwoman of Channel Albany, as well as a familiar face in Albany County politics. Having served as the director of communications for the Albany County Executive’s Office for almost nine years, Rozak is well aware of the role free speech and community media plays in the execution of her job.

“Community Media Day and Free Speech Week are so important to the fabric of public access,” Rozak said. “Being able to express ourselves freely and share information about our communities with members of our community and beyond are fundamental to helping our neighborhoods grow and learn. We lost an important member of [Public Education and Government] this year with the passing of longtime producer Dennis Karius. He was passionate about public access and hosted two shows — Citizens for Public Transportation and Solarize the Capital Region. We need more producers like Dennis to share their important stories and commitment to being heard.”

Hyman continued the importance of free speech is something schools should be teaching, as it gives a strong sense of who we are. He added the area’s rich resources and vast pool of talent is a prime example of how freedom of speech only elevates those it protects.

“So many of our most talented are from local institutions like Albany High School,” Hyman said. “These schools are a testament to how each of our neighbors is able to flourish differently under something so universal in this country. The right extends from womb to tomb and is not something that can be taken away.”

Schmidt and Open Stage Media are excited about the event. A fixture of Capital District media, OSM is known for its broadcasting of Albany County League of Women Voters candidate forums and unfiltered government meetings. Schmidt reiterated OSM does not believe in censorship, instead promoting the “free flow of thoughts and opportunity.” He added the ability for OSM to participate is an honor since the organization is only as good as the community allows it to be.

Most of all, Hyman wants people to understand how freedom of speech has enriched our nation’s most creative outlets and the allowance to blossom without interference.

“As a singer, writer, elder, actor and teacher, I practice freedom of speech daily,” Hyman said. “Freedom of speech means an abundant plethora of joy through creative self-expression that leads to enlightenment, inspiration and serenity. Freedom of speech to me is sharing something perfect between ourselves that leads to a greater understanding of our purpose in life and growth. The First Amendment means that not only do we have the right to freedom of speech, but it is protected by the law of the land.”

For information on the 2020 Free Speech Week celebration, visit https://openstagemedia.org/.