REVIEW: Tragedy holds nothing sacred with heavy metal parody of other genres 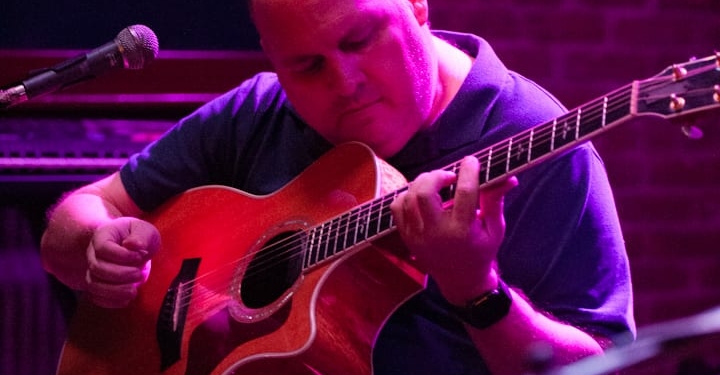 The Tradition and Tragedy performed in front of a near sold out crowd at the The Hollow in Albany on Friday, Jan. 31. (Michael Hallisey / The Spot 518)

Tragedy was three songs into its set when a gentleman in a sweater vest approached the merch desk with a question. The music was too loud to hear the exchange, despite that the conversation was only five feet away. From his hand gestures, he looked like he was asking in vain for the volume to be turned down. You know what people say about music being too loud. But, he wasn’t old. Not really. Hair metal had a place in pop culture in the ‘80s. And, well, sweater vests had their day too.

On stage was a flamboyant display of ‘80s pop culture not limited to the hair metal music being played, or the homage to disco in the band’s name. Hair metal in 2020 has to offer more than just the music and the hair. Acts like The Darkness and Steel Panther have made a comical production out of the genre in recent years.

Tragedy’s show at The Hollow was nothing short of a production, as it was intended. Lance, dressed as a sailor with his name bedazzled on the back, introduced the band to the stage while playing the theme to 20th Century Fox on a recorder. Unabashed testosterone was in the air, as were blow up dolls as they flew across the room. What followed next was a delicious abomination birthed between heavy metal and disco.

The Bee Gees are ever present with Tragedy. Disco Mountain Man took front and center at lead vocals, between Garry Gibb on lead guitar, and two flying Vs played by Mo’Royce Peterson and Andy Gibbous Waning. Behind the drum kit was The Lord Gibbeth. They adopt the Gibb family name that single-handedly flung RSO records into (and out of) music industry dominance.

But the show was not a mere tribute to one band. By appearance, Tragedy drew inspiration from early Motley Crue, Poison and — in the possible case of Peterson’s backlit guitar — Twiki from the Buck Rogers sci-fi television series. As such, Tragedy is an amalgamation of all things Gen Xers remember from childhood.

Musically, there were more songs representing disco and ‘70s pop music than the Bee Gees alone. And, to the crowd’s delight, everyone fell victim to the parody.

Comical stories segued into familiar song titles from Donna Summers, John Denver, Asia and Grease. Lance returned to the stage wearing a cape and mask reminiscent of King Diamond’s white and black face paint to introduce “Sweet Caroline.” With our relative proximity to Boston’s Fenway Park, it was a welcomed singalong. Familiar guitar riffs from metal staples were seamlessly intermingled with mismatched lyrics. It’s amazing how masterful the mashups married so well. It mattered little whether those in the crowd were fans of speed metal, grindcore or disco. Before the night was through, a near full house was singing along and head banging in unison.

The gentleman in the sweater vest, as it turned out, was misunderstood. He wanted a Tragedy shirt.

The Tradition opened the night with a 45-minute acoustic set that featured local Mick Jagger doppelganger Tommy Love. Aside from the unplugged nature of the performance, the pairing was genius. Frontman Ralph Renna, flanked by some wicked guitar play from both Zach Leffler and Tom Atkins, laced together Led Zeppelin and the Rolling Stones preceded by Snoop Dogg, Buffalo Springfield and an assortment of ‘90s grunge.

Cheap Trick looks to keep it fresh at The Palace