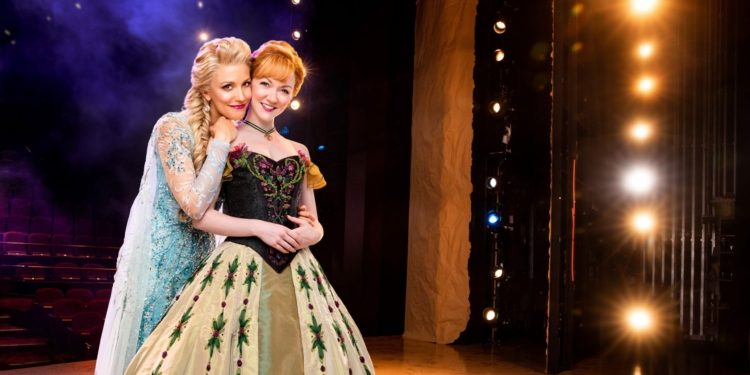 By now you know the storyline.

One sister struggles with harnessing a curse that gives her amazing powers while the other sets out to the unknown to bring her family together again.

Both are searching for love, but they’ll learn that to find it they’ll have to look inside themselves, first.

Frozen first melted the hearts of movie-goers in 2013, and has since become a Broadway production featuring both the beloved songs from the animated film and an expanded score for the stage. With the work of a creative team that had amassed 16 Tony Awards together, including Robert Lopez, Oscar-winning lyricist Kristen Anderson-Lopez, Oscar-winning writer Jennifer Lee and Tony Award-winning director Michael Grandage, Frozen is now an unforgettable theatrical experience.

Frozen opens at Proctors Theatre on Sunday, Nov. 10, for a two-week run before Disney Theatrical Productions takes it on to a nationwide tour. Caroline Bowman stars as Elsa and Caroline Innerbichler as Anna. Austin Colby plays the role of Hans, F. Michael Haynie is Olaf, and Collin Baja and Evan Strand will alternate as Sven.

Mason Reeves, a 21-year-old student out of Arizona, landed the coveted role of Kristoff.

“Once I learned I landed the role,” said Reeves, “they told me to be prepared; everyone is going to fall in love with you.”

Kristoff is the male role that everyone can relate with. Perhaps his first endearing characteristic is that he’s not your typical Disney Prince. In a storyline that breaks Disney’s tired mold knight in shining armor, damsel in distress conflict, Kristoff is not it. He’s the friend who falls under the radar. Guys can relate. So can their wives.

The actor who is to play him has already amassed an impressive resume, and he’s yet to graduate from Michigan University. At Bucks County Playhouse in Pennsylvania, Reeves worked with Tony Award-nominee Terrence Mann in “Mamma Mia!” This summer, he was the leading man in “Footloose” at the Muny in St. Louis. A challenging role, originated in the 1983 film by Kevin Bacon, Ren hardly left the stage. There was the dancing, and the oppressive Missouri summer heat. The Muny is St. Louis’ oldest outdoor theatre.

“They had cold wash cloths at the ready,” he said.

“Footloose” paired Reeves with two-time Tony Award-winner Christian Borle. It was full-circle for Borle, whose Broadway debut was in Footloose in 1998. Now as the director, Reeves said, Borle grew tired of seeing Ren always going to someone who was white.

Reeves grew up as an aspiring soccer player with a mom in community theatre. Each of her productions called for a young boy, and his mother always volunteered him. At a young age, he learned the subtle art of negotiation, jockeying between the stage and the pitch. At first, he worked around soccer. Gradually, soccer started to lose out.

In a production of “A Raisin in the Sun,” Reeves said he found his calling. For Reeves, it was the first time he worked with as many black actors. His hometown of Cave Creek is predominantly white. Reeves is half black and, he said, he was often bullied because of it.

“As a half-black young man in Cave Creek, Arizona, I didn’t have much diversity around me and it, ironically, forced me to fulfill a stereotype of what being ‘black’ means,” said Reeves. “In order to fit in, I made myself the ‘black’ kid, even though the stereotypical black experience and behavior I was emulating was something I had no true connection to.”

His first lesson came from the actress who played his character’s mother on “A Raisin in the Sun.” He said he was never in the habit of using skin moisturizer. She looked at his skin and asked him, “What are you doing?”

Reeves said he first saw the animated film “Frozen” just as he caught the bug. Analyzing the movie, he said he never thought it would be something who would be able to act. Once he saw Jelani Alladin, another black man, cast as Kristoff in the Broadway production, it inspired him to audition.

“The bullying that I was experiencing in middle school for not being the person people expected to be, not meeting stereotypes, I’m happy to be able to overcome with this show,” said Reeves. “I’m just getting to be myself, playing this character that everyone knows and loves.” He said it’s not so much that he is a person of color, but that it is acknowledged is nice. “It’s also beautiful to be who I am, and to be a human. We don’t have to fit into one box.

If I had seen myself playing this part in middle school, I wouldn’t have felt so alone and so terrified of who I was,” said Reeves.