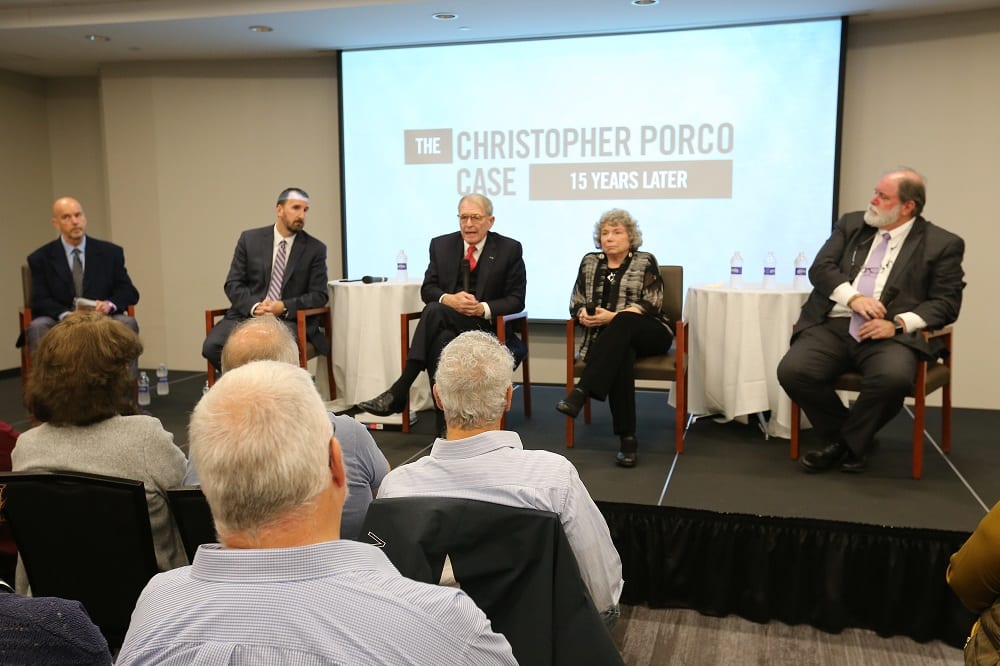 ALBANY — It has been around 15 years since Delmar was rocked by an infamous axe attack on a couple by their own son, which attracted national coverage and inspired several dramatic reenactments on TV.

Law enforcement officials arrived to a bloody scene at a two-story home at 36 Brockley Drive on Nov. 15, 2004 and discovered Peter Porco’s, a 52-year-old Appellate Division court clerk, corpse near the bottom of the staircase on the first floor. His wife, Joan, a children’s speech pathologist, was found barely alive in their bedroom with severe head trauma; her face was gravely disfigured and she had lost one eye too. The family’s axe was also found in the bedroom and officials began investigating one of the couple’s sons, Christopher, who was a University of Rochester student at the time.

As the 21-month investigation progressed, officials determined that he had a false alibi as he had previously told them he was sleeping in a lounge on campus during the night of the attack, but fellow students confirmed he was not there that night. Other notable moments during the investigation included finding no fingerprints or DNA at the crime scene that were directly connected to Christopher; trying to track Christopher’s movements and his yellow Jeep Wrangler right before and after the attack; and Joan allegedly nodding her head when a law enforcement officer asked her if Christopher was the culprit.

Fifteen years later, the case was revisited and discussed by a panel, comprising of a few attorneys directly involved in the case on both sides, at the Hearst Media Center on Wednesday, Oct. 30 for two hours. Tickets for the event sold out online due to popular demand and even the waitlist was full.

The event’s subject, Christopher, was obviously not present as he was found guilty of second degree murder and attempted murder; was sentenced on Dec. 12, 2006 to 50 years to life on each count; and remains imprisoned at the Clinton Correctional Facility in the village of Dannemora.

Moderated by Brendan Lyons, Times Union’s state and investigations editor, the aforementioned panel, who brought up numerous anecdotes and elements of the case to a packed audience, consisted of:

• Terence L. Kindlon — a criminal defense attorney who was co-counsel to Christopher

impediment to get on the story right away” because his own son was due to be delivered via Caesarean section the day after news first broke out of the attack. Lyons recalled that no reporters were allowed at Albany Medical Center, where Joan was hospitalized right after the attack, but he was “two floors up” for his wife. The audience laughed when he joked that Albany Med security were “furious” that he was able to stay inside the hospital and that this “was a story I’ve never written about.”

Kindlon said he had been allowed to enter the Porco home three days after the attack and “it was a horrible scene … a bloodbath and Peter Porco, you can obviously tell, had walked from his master’s bedroom, down the hall and into a bathroom. Clearly, he’d looked into the mirror, bled into the sink, then went out the hallway, down the stairs and into the kitchen.”

He explained that Peter’s odd actions after the axe attack were that “his brain was obviously spinning because he did things he must’ve done every morning like he started to make his lunch and went to get the newspaper. Then, he passed away and there was just blood everywhere.” He also noted that Christopher’s Jeep — it had been seized by New York State Police during the investigation — did not have a single drop of blood which was deemed strange as Christopher had traveled from Delmar to Rochester right after the attack.

McDermott said the large amount of blood discovered at the crime scene was not necessarily because of the attack itself but from the massive blood loss that happened “hours and hours later and from [the couple] moving around.” The couple was also sleeping when Christopher attacked them, likely explaining why he did not get any bloodstains in the process.

As mentioned before, Christopher had told officials that he was sleeping at a lounge at the University of Rochester during the time of the attack. However, Rossi said that Bethlehem police, who traveled to Rochester, interviewed students who said Porco was not there as a group of them was watching a film — “Shrek 2, I remember the name of the movie,” he added — in the lounge that night.

As the event concluded, Lyons said Christopher’s yellow Jeep Wrangler was memorable for its bold look and he remembered seeing Christopher drive his Jeep to the courthouse as his verdict was being decided. After the jury found him guilty, Lyons recalled telling his fellow Times Union colleague and photographer, Michael Farrell, to stay long after all the other media crew and the public left the courthouse.

“[Farrell] said why and I said, ‘That Jeep is going to be sitting there all by itself,’ and I remember he took that photo and it was just such a powerful photo,” he said. “At the end of the day in that giant parking lot, there was nothing there but Christopher’s yellow Jeep.”