Hartley’s Encore keeps the funk in the Capital District, but it’s open to change 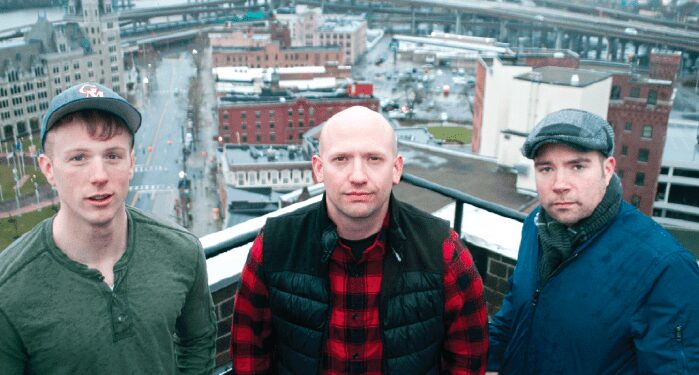 Story has it that Wallace Hartley was reluctant to leave his fiancee to board the Titanic on the ship’s ill-fated maiden voyage, but he settled on the chance he could earn more contacts to advance his music career.

History knows Hartley as the leader of the nine-piece chamber orchestra that continued to play music until the ship’s last moments. What inspired him and his troupe to continue on as the ocean liner listed and sank into the North Atlantic is left to the imagination. But, it’s an image that inspired Luke Malamood and his troupe to name their band after the oft-remembered musician.

Self-described as the “house band at your dance party for the apocalypse,” Hartley’s Encore is an energetic funk ensemble with a soulful horn section. The band has performed at local venues since forming nearly two years ago. But, what’s worthy of taking note is the band’s seemingly quick rise within the local music scene.

Malamood and Oliver have been friends since attending Guilderland High School. They’ve played music together for just as long, separated only by several years of college, grad school, careers and just life in general. They got back together soon after Oliver moved back to the Capital District, frustrated over the pay-to-play music scene in New York City. Before long, the two started writing music together.

“When he and I first started doing it, it was songwriting, songwriting, songwriting,” said Oliver, “and that’s all we cared about. The demand of that seemed like that was too much for what we originally had.” There was initial frustration trying to fill the missing pieces to the band: the common challenge to any band, finding someone you can work with and learn the material. “Basically, we’re writing everything anyway, let’s just get whoever wants to play to jump in on these songs, and layer on top of it.”

Then, through an act of serendipity, Hartley’s Encore found itself without a drummer on the night of a gig in Troy. Malamood recalls frantic moments on the phone. Each person he called seemed to settle on one name, Mike Gilet.

“We got him off the couch,” said Malamood, in that Gilet just so happened to be free that night. And, despite never having played the material before, picked up on it quickly. Oliver remembers how Gilet would listen to each song on his phone. How he nodded and said, “alright,” before proceeding to play. After two hours of playing on stage, Malamood said, “This dude’s our drummer.”

Oliver and Malamood sit together in their small rehearsal room at North Albany Studios talking about music in a way one wouldn’t expect by looking at them. When Oliver writes, he’s conscious of the structure. The guitarist sits next to the drum kit in the far corner of the room. Dressed casually in dark pants, dark jacket, with his outfit accompanied by a dark woolen cap, he speaks of Verse. Bridge. Chorus. Verse. Bridge. Chorus. Malamood, squeezing in the interview between clocking out from his law firm, where he is a partner, and family time, speaks of the relative unstructured funky improvisation of The Meters. He’s dressed in a pressed suit, leather shoes, and astute eyeglasses. It’s an urban personification of the Chinese yin and yang symbol that describes two powers that oppose one another in appearance actually work together.

Malamood has that yin and yang structure working for him as a husband and father, too. Music is a passion of his. With Hartley’s Encore picking up and playing gigs, he finds himself robbing sleep and pay towards playing the keyboard. This Hartley is unwilling to take away from his family time.

Oliver moved back to the Capital District with simple aspirations. He just wanted to play music without having to beg or pay venues to do it. Malamood is on the same page. “We wouldn’t be able to do this if we weren’t on the same page,” said Oliver. “I’m right there with him.”

Malamood looks at another music scene in New Orleans and wants to replicate it here. He wishes to establish a strong enough reputation to allow the band to play whenever it wants, wherever it wants, and to have people fill that venue. Unlike Hartley’s attempt to network by traveling thousands of miles across the ocean, Malamood intends to do it here at home. “I think there’s a way to do it all,” he said.

As it prepares to drop its debut album, Hartley’s Encore is throwing a party at The Hollow Bar + Kitchen on Friday, April 27, at 8 p.m. Its eponymous debut album is a six-track EP, from which a tease of its first single can be heard on NYSMusic.com.

The show starts at 8 p.m. Tickets are available at eventbrite.com.

The Hollow Bar + Kitchen is located at 79 No. Pearl Street in downtown Albany.