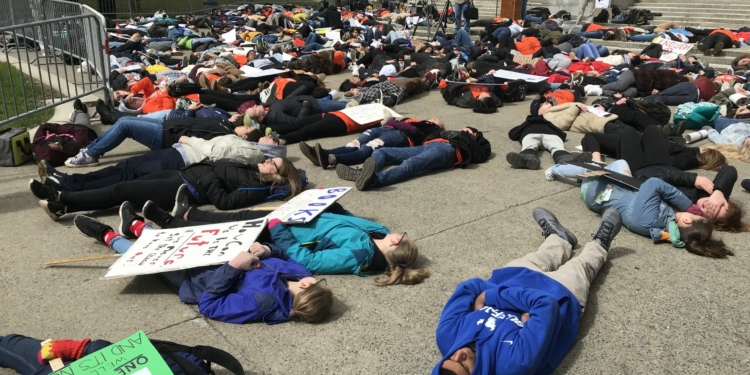 The rally on April 20 at the state Capitol. (Photo submitted)

BETHLEHEM—A handful of Bethlehem Central Middle School students received in-school suspensions after participating in a nationwide walkout organized in the aftermath of the shooting at Marjory Stoneman High School in Parkland, Fla.—held on the 19th anniversary of the shooting at Columbine High School.

According to 8th grader Aliza Cotton, while the few students who chose to demonstrate were aware that there would be likely repercussions, they were unsure what form that might take.

However, neither Aliza nor her parents are upset with the district, which all three believe handled the situation with respect.

Dan Cotton, Aliza’s father, said he spoke to his daughter about her motivation. “One of the reasons that she walked out is that she doesn’t want the issue to disappear from the public consciousness,” he said, noting that an apparent lack of messaging and diminished participation in the most recent post-Parkland demonstration could be an indication that the national conversation may already be losing steam.

Cotton’s parents, both of whom work in education, expressed pride at the fact that their daughter was willing to face the consequences to reinforce and reinvigorate a movement that has been championed by students across the country after young survivors in Parkland Fla. took to the national stage to say, “Never Again.”

Since the Columbine High School shooting in 1999, at least 193 schools—more than 187,000 students—have experienced a shooting during school hours, according to a Washington Post analysis that looked at data from April 1999 through March 2018. During that time, The Post found an average of 10 shootings a year, with the most, 15, occurring in 2014.

“Less than 3 months into 2018,” states a March article, “there have been 11 shootings, already making this year among the worst on record.”

While Aliza said she feels safe attending class at Bethlehem Middle School, she added, “There are a lot of people that feel that there needs to be a change and this can’t keep happening again.”

Of the school’s response, Katie said, “They followed through with a consequence, but not a punishment. They supported her right to demonstrate, and she knew going in — and we discussed it with her — that there were potential consequences.”

Both of Cotton’s parents, individually, reiterated a quote by education expert Robert Pondiscio: “A school-sanctioned protest is a field trip,” and both agreed that, to make a statement, sometimes it’s necessary to break the rules.

“We think it is about guns,” Aliza Cotton said. “Bullying is an issue, but it’s not the issue. It’s about access to guns.” She said that, while she was only joined by three other students on Friday, she feels most of her classmates support the stand they were taking. A few, she said, took part in the demonstration organized by BCHS senior Lydia Martell at the state Capitol, where Marjory Stoneman survivors spoke and demonstrators staged a lie-in.

Prior to walking out for 13 minutes (in remembrance of the 13 who died in the Columbine shooting), Aliza told her teacher and school administrators. At 10 a.m., along with students across the country, she walked out of class, met with her co-demonstrators in the school cafeteria, and walked out of the building to observe 13 minutes of silence. Upon re-entering the building, the students were met by an administrator and taken to in-school suspension.

“Part of the history of protest,” said Dan Cotton, “is that you willingly accept the consequences of speaking up for your position. So, for us, that was very much part of the learning and experience. And we have no problem with that. I think it makes the decision to do it that much more a decision of conscience on Aliza’s part.”

He said that the students were allowed to complete their schoolwork, and that the school made it clear that repercussions were not meant to be punitive.

“Advancements are achieved by individual people making individual choices along with other people to create movements and so it’s important for us that she know she has a voice and that she wants to use it in the service of making the world a better place,” said Dan Cotton.

“I know that I will always use my voice to speak up for what I believe in,” said Aliza, who has been writing to her state and federal representatives as well. “I’m hoping that people will take notice, the ones with power. I’m hoping we can get more gun legislation passed.”

South Colonie budget would increase spending by 2.75 percent and taxes by 2.95 percent

Hartley’s Encore keeps the funk in the Capital District, but it’s open to change