A review of ‘She Loves Me’ at the Capital Rep through Dec. 24 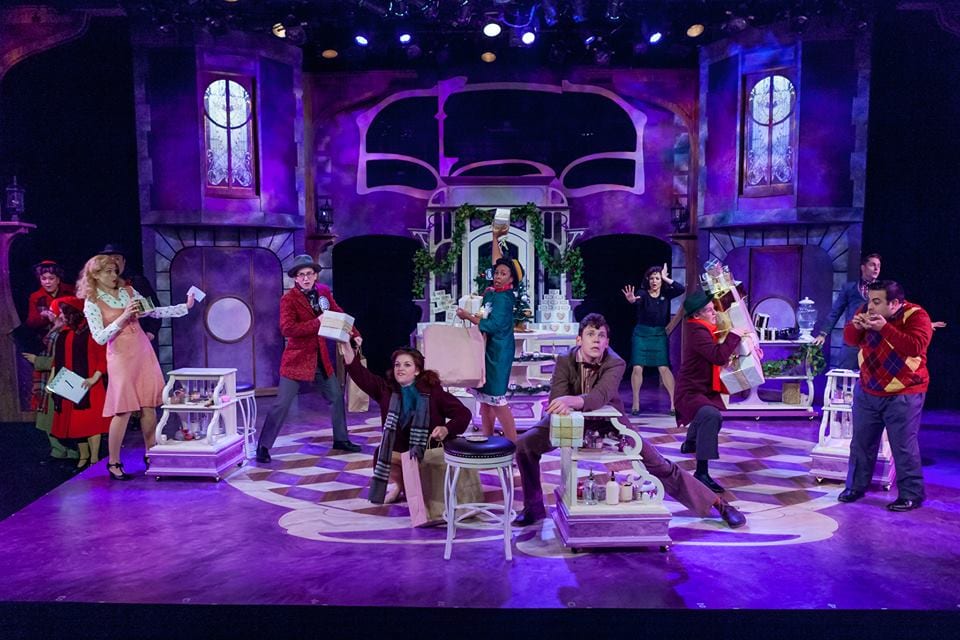 Brian Prather’s set for “She Loves Me” is like an old timey music box or cuckoo clock: the violaceous palate of the set picked up subtly by Evan Prizant’s costume design is delightful, and when the set pieces for Maracek’s shoppe of all things perfumed begin to whirl as they shift into place, charm fills the stage. Coupled with Jamie Roderick’s warm lighting, “She Loves Me” is gifted with an ideal mise en scene for the suddenly very popular musical; Manhattan’s Roundabout Theatre’s 2016 hit production was recently on PBS’s Great Performances, and this 1963 musical based on a 1937 Hungarian play (which was adapted for several film versions over the intervening 70 years) strikes an oddly cheery note on workplace love relations in the present moment of discordant and disappointing hourly reports of repellent acts of men in such workplaces.

So it is oddly fitting that on the day Prairie Home Companion’s homespun and old timey creator Garrison Keillor was severed from his workplace in public life for acts in the same vein as seen onstage here at Capital Repertory Theatre, “She Loves Me” should bring its cheery and delightful depiction of workplace amorous shenanigans and be so utterly discordantly charming. It’s an amazing accomplishment, akin to a holiday decorated musical box filled with delicious chocolate covered cherry cordials.

Artistic Director Maggie Mancinelli-Cahill has assembled a wonderful cast and moves them briskly about the intimate (the less kind would write “cramped”) stage as they tell the stories in a year in Maraczek’s Parfumerie. Reminiscent of the workplace romances of Hello Dolly! (itself an adaptation of an adaptation of an Austrian comedy Einen Jux will er sich machen by Johann Nestroy, and the basis for one of the funniest plays in English, Tom Stoppard’s On the Razzle), “She Loves Me” centers on chief salesclerk Georg Nowack (Michael McCorry Rose in a focused, exact, winning performance that is both star turn and ensemble friendly acting) and his anonymous amorous correspondence with the unknown “friend,” who turns out to be Amalia Balash (Julia Burrows), who despise each other as they work in Maraczek’s and woo in letters.

As owner Maraczek, local legend Kevin McGuire is at his finest, participating in the same play on the same plane as his castmates and giving his most realized performance, human and believably angry, crusty, caring, shaken, and supportive as needed. Marc de la Concha as milquetoast clerk Ladislav Sipos is a comic genius with genial air who wrings laughter with his antics in supportive of Georg no mater how veiled. Adam B. Shapiro’s Headwaiter is the highlight of “A Romantic Atmosphere” that fuels the big reveal of Georg and Amalia’s anonymous correspondence at a restaurant of rendezvous, seemly always decorated for St. Valentine’s Day or a New Orleans bordello. Jimmy Bain’s smile, as delivery boy Arpad (who longs to ascend to the height of the mercantile world to become a clerk in Maraczek’s), beams like a sunny day, and his comedic chops and timing in his scene with Maraczek, “Try Me,” opens act 2 with zeal. David Girard is brilliant as workplace Lothario Kodaly, believably capturing the greasy charm of the narcissist who loves only himself even as he carries on with Maraczek’s wife as well as fellow clerk Ilona Ritter (an amazingly funny yet heartaching Tracy Jai Edwards, who sings as well as she dances all founded on an acting talent that makes her many moments on stage all the more engaging and charming). The troupe’s all hands and feet on deck creation of “Twelve Days to Christmas” near the finale of Act 2 is this production’s highlight and should not be missed by anyone needing to be put into the holiday spirit.

Yet, there is a moment that symbolizes the show’s oddly “WTF” discordance with the present moment in our Nation’s struggle to reclaim “life, liberty, and the pursuit of happiness” for all: at the climax of “Ilona” the winsome and supple Edwards does a split centerstage, the split in her dress exposing her legs fully. It’s a mildly suggestive moment but fits the song, until Kodaly takes Ilona’s split and makes it a slide across half the stage to downright, and it is a downright “WTF” moment, like biting into a chocolate covered cherry cordial and finding a short hair. It’s similar moments that mar an otherwise weirdly wonderful “She Loves Me.”